Fluids are found everywhere in the world. Earth has about two-thirds of water and one-third of land.

Fluids are found everywhere in the world. Earth has about two-thirds of water and one-third of land. Fluids are different from solids. Unlike solid, fluid has no defined shape of its own. As far as fluid is concerned, liquid has fixed volume whereas gas fills the entire volume of the container.

Pressure of a fluid:

Fluid is a substance which begins to flow when an external force is applied on it. It offers a very small resistance to the applied force. If the force acts on a smaller area, then the impact will be more and vice versa. This particular idea decides yet another quantity called ‘pressure’. Assume that an object is submerged in a fluid (say water) at rest. In this case, the fluid will exert a force on the surface of the object. This force is always normal to the surface of the object. If F is the magnitude of the normal force acting on the surface area A, then the pressure is defined as the ‘force acting per unit area’.

Pressure is a scalar quantity. It’s S.I. unit and dimensions are N m-2 or pascal (Pa) and [ML-1T-2], respectively. Another common unit of pressure is atmosphere, which is abbreviated as ‘atm’. It is defined as the pressure exerted by the atmosphere at sea level. i.e., 1 atm = 1.013 x 105 Pa or N m-2. Apart from pressure, there are two more parameters such as density and relative density (or specific gravity) which are used to describe the nature of fluids.

Density of a fluid:

The density of a fluid is defined as its mass per unit volume. For a fluid of mass ‘m’ occupying volume ‘V’, the density  ρ = m/V. The dimensions and S.I unit of ρ are [ML-3] and kg m-3,respectively. It is a positive scalar quantity. Mostly, a liquid is largely incompressible and hence its density is nearly constant at ambient pressure (i.e. at 1 atm. pressure). In the case of gases, there are variations in densities with reference to pressure.

A solid sphere has a radius of 1.5 cm and a mass of 0.038 kg. Calculate the specific gravity or relative density of the sphere. 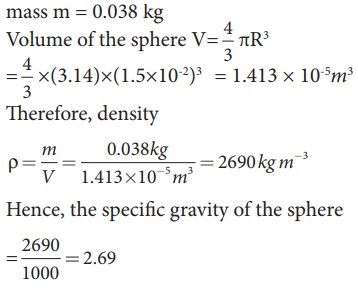