The flow of fluids occurs in different ways.

When a liquid flows such that each particle of the liquid passing through a point moves along the same path with the same velocity as its predecessor then the flow of liquid is said to be a streamlined flow. It is also referred to as steady or laminar flow. The actual path taken by the particle of the moving fluid is called a streamline, which is a curve, the tangent to which at any point gives the direction of the flow of the fluid at that point as shown in Figure 7.16. It is named so because the flow looks like the flow of a stream or river under ideal conditions.

If we assume a bundle of streamlines having the same velocity over any cross section perpendicular to the direction of flow then such bundle is called a ‘tube of flow’. 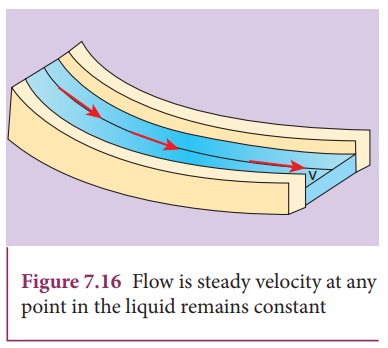 Thus, it is important to note that any particle in a tube of flow always remains in the tube throughout its motion and cannot mix with liquid in another tube. Always the axis of the tube of flow gives the streamline. The streamlines always represent the trajectories of the fluid particles. The flow of fluid is streamlined up to a certain velocity called critical velocity. This means a steady flow can be achieved at low flow speeds below the critical speed.