When a force is applied, the size or shape or both may change due to the change in relative positions of atoms or molecules.

When a force is applied, the size or shape or both may change due to the change in relative positions of atoms or molecules. This deformation may not be noticeable to our naked eyes but it exists in the material itself. When a body is subjected to such a deforming force, internal force is developed in it, called as restoring force. The force per unit area is called as stress.

(i) Longitudinal stress and shearing stress: 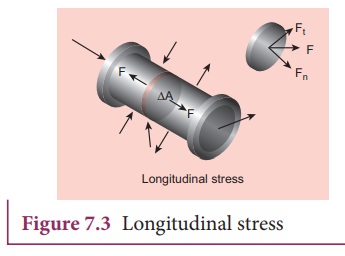 Let us consider a body as shown in Figure 7.3. When many forces act on the system (body), the center of mass (defined in unit 5) remains at rest. However, the body gets deformed due to these forces and so the internal forces appear. Let ∆A be the cross sectional area of the body. The parts of the body on the two sides of ∆A exert internal forces

Similarly, the tangential stress or shearing stress σt over the area is defined as

Longitudinal stress can be classified into two types, tensile stress and compressive stress. 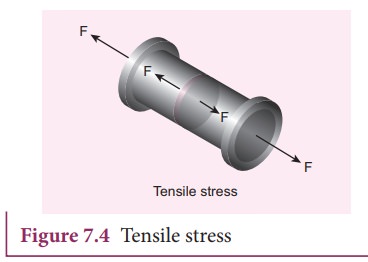 Internal forces on the two sides of ∆A may pull each other, i.e., it is stretched by equal and opposite forces. Then, the longitudinal stress is called tensile stress. 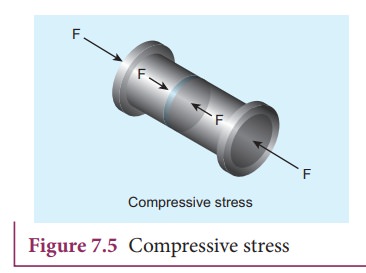 When forces acting on the two sides of ∆A push each other, ∆A is pushed by equal and opposite forces at the two ends. In this case, ∆A is said to be under compression. Then, the longitudinal stress is called compressive stress.

This happens when a body is acted by forces everywhere on the surface such that the force at any point is normal to the surface and the magnitude of the force on a small surface area is proportional to the area. For instance, when a solid is immersed in a fluid, the pressure at the location of the solid is P, the force on any area ∆A is

Where, F is perpendicular to the area. Thus, force per unit area is called volume stress.

which is the same as the pressure.

Strain measures how much an object is stretched or deformed when a force is applied. Strain deals with the fractional change in the size of the object, in other words, strain measures the degree of deformation. As an example, in one dimension, consider a rod of length l when it stretches to a new length ∆l then

ε is a dimensionless quantity and has no unit. Strain is classified into three types.

When a rod of length l is pulled by equal and opposite forces, the longitudinal strain is defined as

Longitudinal strain can be classified into two types

(i) Tensile strain: If the length is increased from its natural length then it is known as tensile strain. 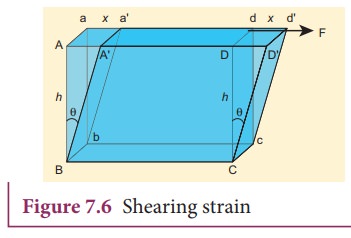 The maximum stress within which the body regains its original size and shape after the removal of deforming force is called the elastic limit.

If the deforming force exceeds the elastic limit, the body acquires a permanent deformation. For example, rubber band loses its elasticity if pulled apart too much. It changes its size and becomes misfit to be used again.