Calculate the value of surface tension of soap solution.

When the free surface of a liquid comes in contact with a solid, then the surface of the liquid becomes curved at the point of contact. Whenever the liquid surface becomes a curve, then the angle between the two medium (solid-liquid interface) comes in the picture. For an example, when a glass plate is dipped in water with sides vertical as shown in figure, we can observe that the water is drawn up to the plate. In the same manner, instead of water the glass plate is dipped in mercury, the surface is curved but now the curve is depressed as shown in Figure 7.29.

Its value is different at interfaces of different pairs of solids and liquids. In fact, it is the factor which decides whether a liquid will spread on the surface of a chosen solid or it will form droplets on it.

Let us consider three interfaces such as liquid-air, solid-air and solid-liquid with reference to the point of contact ‘O’ and the interfacial surface tension forces Tsa, Tsl and Tla on the respective interfaces as shown in Figure 7.26. 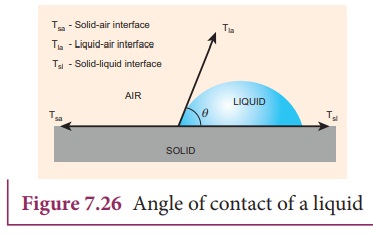 Since the liquid is stable under equilibrium, the surface tension forces between the three interfaces must also be in equilibrium. Therefore,

From the above equation, there are three different possibilities which can be discussed as follows.

(iii) If Tsa > Tla + Tsl then there will be no equilibrium and liquid will spread over the solid.