Osborne Reynolds (1842-1912) formulated an equation to find out the nature of the flow of fluid, whether it is streamlined or turbulent.

We have learnt that the flow of a fluid becomes steady or laminar when the velocity of flow is less than the critical velocity vc otherwise, the flow becomes turbulent. Osborne Reynolds (1842-1912) formulated an equation to find out the nature of the flow of fluid, whether it is streamlined or turbulent.

It is a dimensionless number called ‘Reynold’s number’. It is denoted by the symbol Rc or K. In the equation, ρ denotes the density of the fluid, v the velocity of the flowing fluid, D is the diameter of the pipe in which the fluid flow, and η is the coefficient of viscosity of the fluid. The value of Rc remains the same in any system of units. 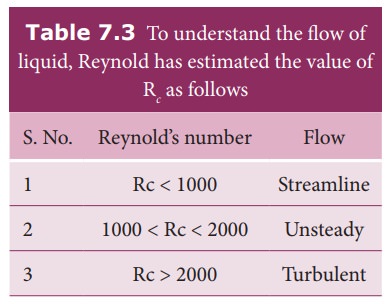 Hence, Reynold’s number Rc is a critical variable, which decides whether the flow of a fluid through a cylindrical pipe is streamlined or turbulent. In fact, the critical value of Rc at which the turbulent sets is found to be the same for geometrically similar flows. For example, when two liquids (say oil and water) of different densities and viscosities flow in pipes of same shapes and sizes, the turbulence sets in at almost the same value of Rc. The above fact leads to the Law of similarity which states that when there are two geometrically similar flows, both are essentially equal to each other, as long as they embrace the same Reynold’s number. The Law of similarity plays a very important role in technological applications.

The shape of ships, submarines, racing cars, and airplanes are designed in such a way that their speed can be maximized.