In order to discuss the mass flow rate through a pipe, it is necessary to assume that the flow of fluid is steady, the flow of the fluid is said to be steady if at any given point, the velocity of each passing fluid particle remains constant with respect to time.

In order to discuss the mass flow rate through a pipe, it is necessary to assume that the flow of fluid is steady, the flow of the fluid is said to be steady if at any given point, the velocity of each passing fluid particle remains constant with respect to time. Under this condition, the path taken by the fluid particle is a streamline.

Consider a pipe AB of varying cross sectional area a1 and a2 such that a1 > a2. A non-viscous and incompressible liquid flows steadily through the pipe, with velocities v1 and v2 in area a1 and a2, respectively as shown in Figure 7.32. 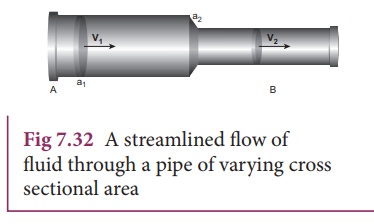 For an incompressible liquid, mass is conserved m1 = m2

which is called the equation of continuity and it is a statement of conservation of mass in the flow of fluids.

In general, a v = constant, which means that the volume flux or flow rate remains constant throughout the pipe. In other words, the smaller the cross section, greater will be the velocity of the fluid. 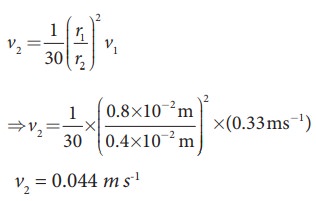 A liquid in a steady flow can possess three kinds of energy. They are (1) Kinetic energy, (2) Potential energy, and (3) Pressure energy, respectively.

i) Kinetic energy:  The kinetic energy of a liquid of mass m moving with a velocity v is given by

The kinetic energy per unit mass =

The potential energy per unit mass

ii) Pressure energy: The energy acquired by a fluid by applying pressure on the fluid. We know that

In 1738, the Swiss scientist Daniel Bernoulli developed a relationship for the flow of fluid through a pipe of varying cross section. He proposed a theorem for the streamline flow of a liquid based on the law of conservation of energy.

According to Bernoulli’s theorem, the sum of pressure energy, kinetic energy, and potential energy per unit mass of an incompressible, non-viscous fluid in a streamlined flow remains a constant. Mathematically,

This is known as Bernoulli’s equation. 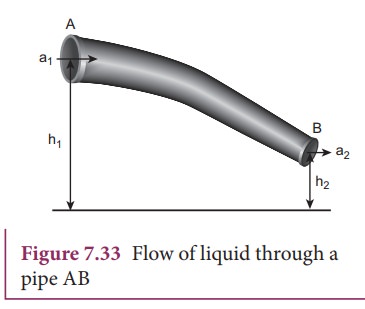 Let the force exerted by the liquid at A is

Distance travelled by the liquid in time t is

Therefore, the work done is

But aAvAt = aAd =V, volume of the liquid entering at A.

Thus, the work done is the pressure energy (at A), 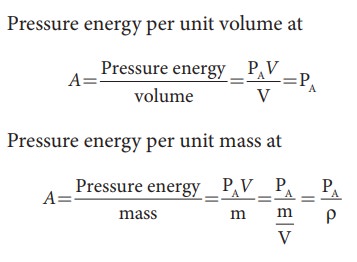 Potential energy of the liquid at A,

Due to the flow of liquid, the kinetic energy of the liquid at A,

Therefore, the total energy due to the flow of liquid at A, EA = EPA + KEA + PEA

Similarly, let aB, vB, and PB be the area of cross section of the tube, velocity of the liquid, and pressure exerted by the liquid at B. Calculating the total energy at EB, we get

From the law of conservation of energy,

Thus, the above equation can be written as

The above equation is the consequence of the conservation of energy which is true until there is no loss of energy due to friction. But in practice, some energy is lost due to friction. This arises due to the fact that in a fluid flow, the layers flowing with different velocities exert frictional forces on each other. This loss of energy is generally converted into heat energy. Therefore, Bernoulli’s relation is strictly valid for fluids with zero viscosity or non-viscous liquids. Notice that when the liquid flows through a horizontal pipe, then h = 0

(a) Blowing off roofs during wind storm In olden days, the roofs of the huts or houses were designed with a slope as shown in Figure.7.34. One important scientific reason is that as per the Bernoulli’s principle, it will be safeguarded except roof during storm or cyclone. 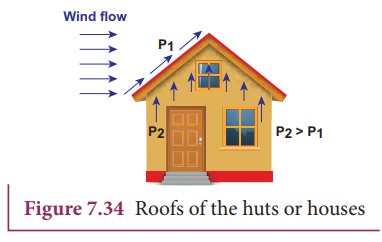 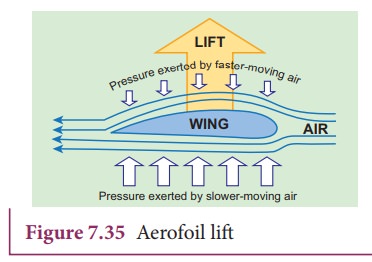 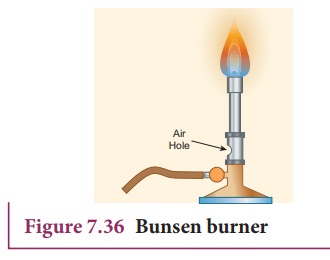 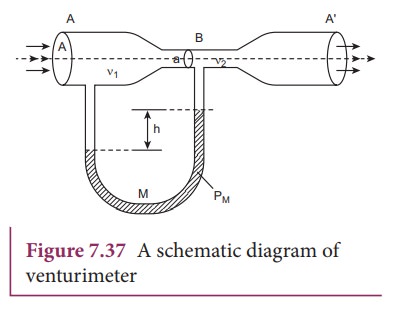