A number of voltammetric experiments are routinely used in quantitative and qualitative analyses. Several of these methods are briefly described in this section.

A number of voltammetric experiments are routinely used in quantitative and qualitative analyses. Several of these methods are briefly described in this section.

The earliest voltammetric experiment was normal polarography at a dropping mercury electrode. In normal polarography the potential is linearly scanned, producing voltammograms such as that shown in Figure 11.35. Although polarography takes place in an unstirred solution, a limiting current is obtained because the falling Hg drops mix the solution. Each new Hg drop, therefore, grows in a solution whose composition is identical to that of the initial bulk solution. 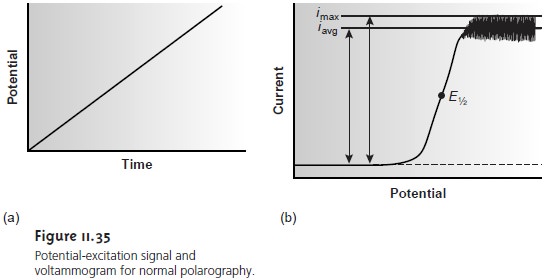 Oscillations in the current are due to the growth of the Hg drop, which leads to a time-dependent change in the area of the working electrode. The limiting current, which is also called the diffusion current, may be measured from the maximum current, imax, or from the average current, iavg. The relationship between the con- centration of analyte, CA, and the limiting current is given by the Ilikovic equation 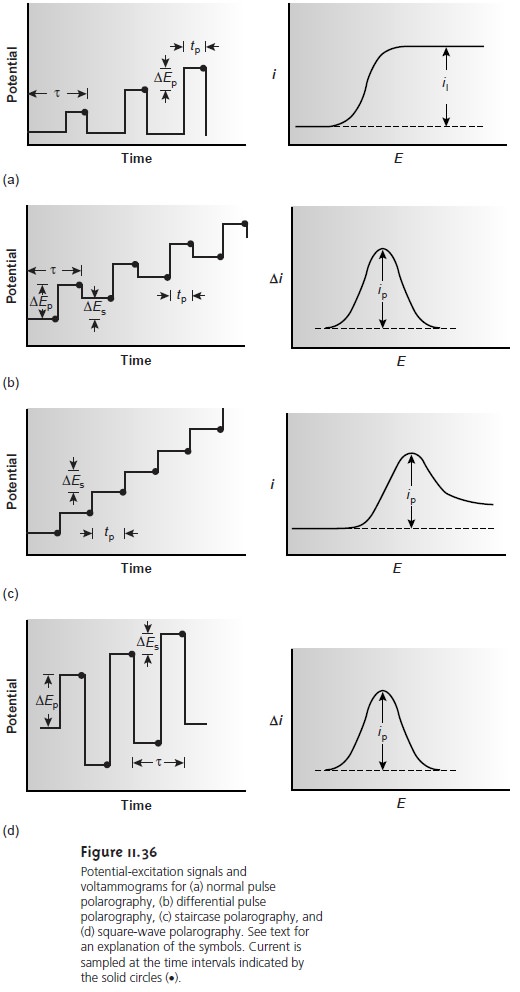 In hydrodynamic voltammetry current is measured as a function of the po- tential applied to a solid working electrode. The same potential profiles used for polarography, such as a linear scan or a differential pulse, are used in hydrody- namic voltammetry. The resulting voltammograms are identical to those for po- larography, except for the lack of current oscillations resulting from the growth of the mercury drops. Because hydrodynamic voltammetry is not limited to Hg elec- trodes, it is useful for the analysis of analytes that are reduced or oxidized at more positive potentials. 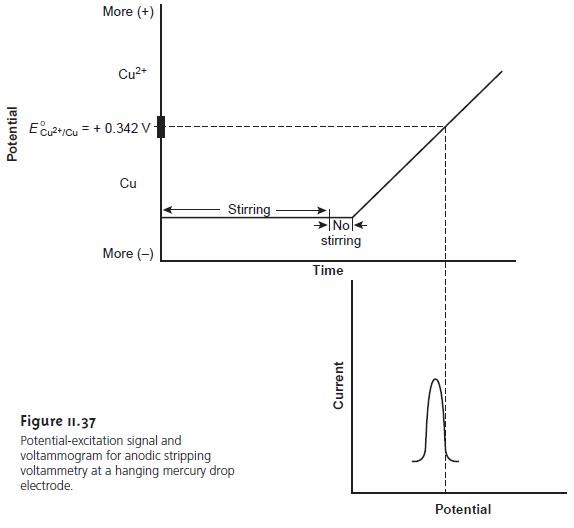 Anodic stripping voltammetry consists of two steps (Figure 11.37). The first is a controlled potential electrolysis in which the working electrode, usually a hanging mercury drop or mercury film, is held at a cathodic potential sufficient to deposit the metal ion on the electrode. For example, with Cu2+ the deposition reaction is

where Cu(Hg) indicates that the copper is amalgamated with the mercury. This step essentially serves as a means of preconcentrating the analyte from the larger volume of the solution to the smaller volume of the electrode. The solution is stirred during electrolysis to increase the rate of deposition. Near the end of the deposition time stirring is stopped, eliminating convection as a mode of mass transport. Deposition times of 1–30 min are common, with longer times being used for analytes at lower concentrations.

In the second step, the potential is scanned anodically toward more positive potentials. When the potential of the working electrode is sufficiently positive the analyte is stripped from the electrode, returning to solution as its oxidized form

The current during the stripping step is monitored as a function of potential, giving rise to peak-shaped voltammograms similar to that shown in Figure 11.37. The peak current is proportional to the analyte’s concentration in the solution.

Anodic stripping voltammetry is very sensitive to experimental conditions, which must be carefully controlled if results are to be accurate and precise. Key vari- ables include the area of the mercury film electrode or the size of the Hg drop when using a hanging mercury drop electrode, the deposition time, the rest time, the rate of stirring, and the scan rate during the stripping step. Anodic stripping voltamme- try is best used for metals that form amalgams with mercury, several examples of which are listed in Table 11.11. 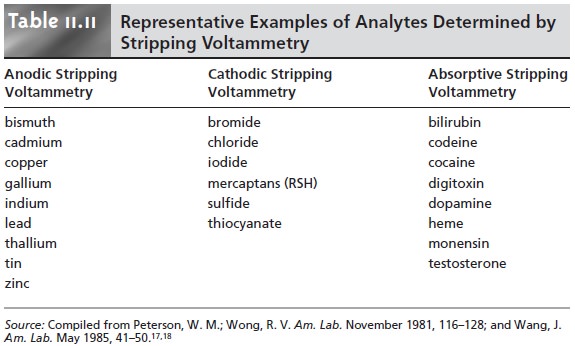 Table 11.11 lists several analytes that have been analyzed successfully by cathodic stripping voltammetry.

In adsorptive stripping voltammetry the deposition step occurs without elec- trolysis. Instead, the analyte adsorbs to the electrode’s surface. During deposition the electrode is maintained at a potential that enhances adsorption. For example, adsorption of a neutral molecule on a Hg drop is enhanced if the electrode is held at –0.4 V versus the SCE, a potential at which the surface charge of mercury is approx- imately zero. When deposition is complete the potential is scanned in an anodic or cathodic direction depending on whether we wish to oxidize or reduce the analyte. Examples of compounds that have been analyzed by absorptive stripping voltam- metry also are listed in Table 11.11.

The final voltammetric technique to be considered is amperome- try, in which a constant potential is applied to the working electrode, and current is measured as a function of time. Since the potential is not scanned, amperometry does not lead to a voltammogram. 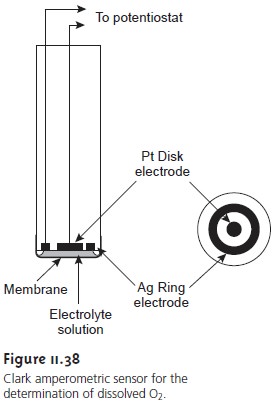 One important application of amperometry is in the construction of chemical sensors. One of the first amperometric sensors to be developed was for dissolved O2 in blood, which was developed in 1956 by L. C. Clark. The design of the amper- ometric sensor is shown in Figure 11.38 and is similar to potentiometric mem- brane electrodes. A gas-permeable membrane is stretched across the end of the sensor and is separated from the working and counter electrodes by a thin solution of KCl. The working electrode is a Pt disk cathode, and an Ag ring anode is the counter electrode. Although several gases can diffuse across the membrane, including O2, N2, and CO2, only oxygen is reduced at the cathode.

Another example of an amperometric sensor is the glucose sensor. In this case the single membrane in Figure 11.38 is replaced with three membranes. The outermost membrane is of polycarbonate, which is permeable to glucose and O2. The second membrane contains an immobilized preparation of glu- cose oxidase that catalyzes the oxidation of glucose to gluconolactone and hy- drogen peroxide.

The hydrogen peroxide then diffuses through the innermost membrane of cel- lulose acetate, where it is oxidized at a Pt anode. 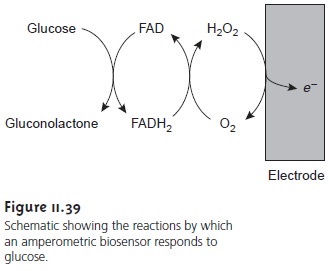 Figure 11.39 summarizes the reactions taking place in this amperometric sen- sor. FAD is the oxidized form of flavin adenine nucleotide (the active site of the enzyme glucose oxidase), and FADH2 is the active site’s reduced form. Note that O2 serves as a mediator, carrying electrons to the electrode. Other mediators, such as Fe(CN) 63–, can be used in place of O2.