When an analyte is oxidized at the working electrode, a current passes electrons through the external electric circuitry to the auxiliary electrode, where reduc- tion of the solvent or other components of the solution matrix occurs.

Since the reaction of interest occurs at the working electrode, the classification of current is based on this reaction. A current due to the analyte’s reduction is called a cathodic current and, by convention, is considered positive. Anodic currents are due to oxidation reactions and carry a negative value.

Influence of Applied Potential on the Faradaic Current

where +0.356 is the standard-state potential for the Fe(CN)63–/Fe(CN)64– redox couple, and x = 0 indicates that the concentrations of Fe(CN)63– and Fe(CN)64– are those at the surface of the electrode. Surface concentrations are used instead of bulk concentrations since the equilibrium position for the redox reaction

can only be established electrochemically at the electrode’s surface.

Let’s assume that we have a solution for which the concentration of Fe(CN)63– is 1.0 mM and in which Fe(CN) 64– is absent. A ladder diagram for this redox example is shown in Figure 11.29. If a potential of +0.530 V is applied to the working electrode, the concentrations of Fe(CN)63– and Fe(CN)64– at the surface of the elec- trode are unaffected, and no faradaic current is observed. Switching the potential to +0.356 V, however, requires that 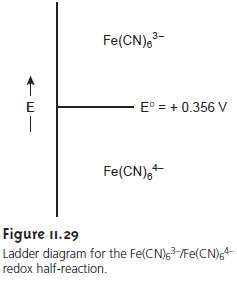 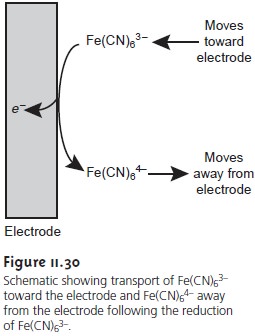 Influence of Mass Transport on the Faradaic Current 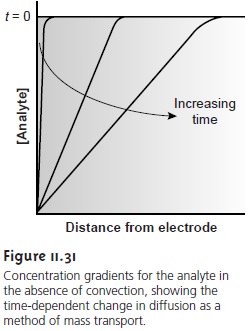 The flux of material to and from the electrode surface is a complex function of all three modes of mass transport. In the limit in which diffusion is the only signifi- cant means for the mass transport of the reactants and products, the current in a voltammetric cell is given by

where n is the number of electrons transferred in the redox reaction, F is Faraday’s constant, A is the area of the electrode, D is the diffusion coefficient for the reactant or product, Cbulk and Cx=0 are the concentration of the analyte in bulk solution and at the electrode surface, and δ is the thickness of the diffusion layer.

For equation 11.33 to be valid, convection and migration must not interfere with the formation of a diffusion layer between the electrode and the bulk of solu- tion. Migration is eliminated by adding a high concentration of an inert supporting electrolyte to the analytical solution. Ions of similar charge are equally attracted or repelled from the surface of the electrode and, therefore, have an equal probability of undergoing migration. The large excess of inert ions, however, ensures that few reactant and product ions will move as a result of migration. Although convection may be easily eliminated by not physically agitating the solution, in some situations it is desirable either to stir the solution or to push the solution through an electro- chemical flow cell. Fortunately, the dynamics of a fluid moving past an electrode re- sults in a small diffusion layer, typically of 0.001 – 0.01-cm thickness, in which the rate of mass transport by convection drops to zero (Figure 11.32). 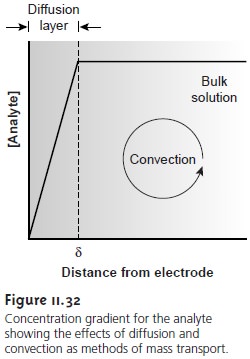 Influence of the Kinetics of Electron Transfer on the Faradaic Current

The rate of mass transport is one factor influencing the current in a voltammetric experiment. The ease with which electrons are transferred between the electrode and the reac- tants and products in solution also affects the current. When electron transfer ki- netics are fast, the redox reaction is at equilibrium, and the concentrations of reac- tants and products at the electrode are those specified by the Nernst equation. Such systems are considered electrochemically reversible. In other systems, when electron transfer kinetics are sufficiently slow, the concentration of reactants and products at the electrode surface, and thus the current, differ from that predicted by the Nernst equation. In this case the system is electrochemically irreversible.

The most important example of a nonfaradaic current occurs whenever the electrode’s potential is changed. In discussing migration as a means of mass trans- port, we noted that negatively charged particles in solution migrate toward a posi- tively charged electrode, and positively charged particles move away from the same electrode. When an inert electrolyte is responsible for migration, the result is a structured electrode–surface interface called the electrical double layer, or EDL, the exact structure of which is of no concern in the context of this text. The movement of charged particles in solution, however, gives rise to a short-lived, nonfaradaic charging current. Changing the potential of an electrode causes a change in the structure of the EDL, producing a small charging current.

Even in the absence of analyte, a small current inevitably flows through an electrochemical cell. This current, which is called the residual current, consists of two components: a faradaic current due to the oxidation or reduction of trace impurities, and the charging current.