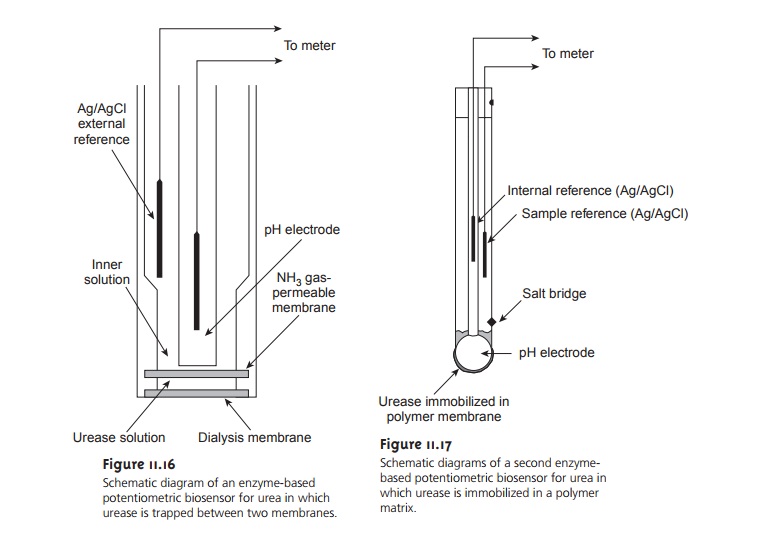 Potentiometric electrodes for the analysis of molecules of biochemical importance can be constructed in a fashion similar to that used for gas-sensing electrodes.

Potentiometric electrodes for the analysis of molecules of biochemical importance can be constructed in a fashion similar to that used for gas-sensing electrodes. The most common class of potentiometric biosensors are the so-called enzyme electrodes, in which an enzyme is trapped or immobilized at the surface of an ion-selective electrode. Reaction of the analyte with the enzyme produces a product whose concentration is monitored by the ion-selective elec- trode. Potentiometric biosensors have also been designed around other biologi- cally active species, including antibodies, bacterial particles, tissue, and hormone receptors.

One example of an enzyme electrode is the urea electrode, which is based on the catalytic hydrolysis of urea by urease

In one version of the urea electrode, shown in Figure 11.16, an NH3 electrode is modified by adding a dialysis membrane that physically traps a pH 7.0 buffered so- lution of urease between the dialysis membrane and the gas-permeable membrane. 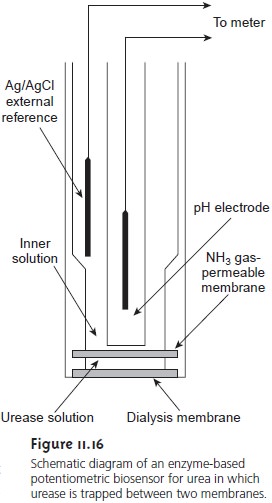 When immersed in the sample, urea diffuses through the dialy- sis membrane, where it reacts with the enzyme urease. The NH4+ that is pro- duced is in equilibrium with NH3

which, in turn, diffuses through the gas-permeable membrane, where it is de- tected by a pH electrode. The response of the electrode to the concentration of urea is given by 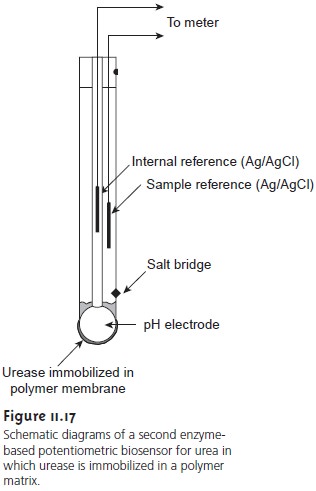 Another version of the urea electrode (Figure 11.17) immobilizes the enzyme in a polymer membrane formed directly on the tip of a glass pH electrode.5 In this case, the electrode’s response is

Few potentiometric biosensors are commercially available. As shown in Figures 11.16 and 11.17, however, available ion-selective and gas-sensing electrodes may be easily converted into biosensors.