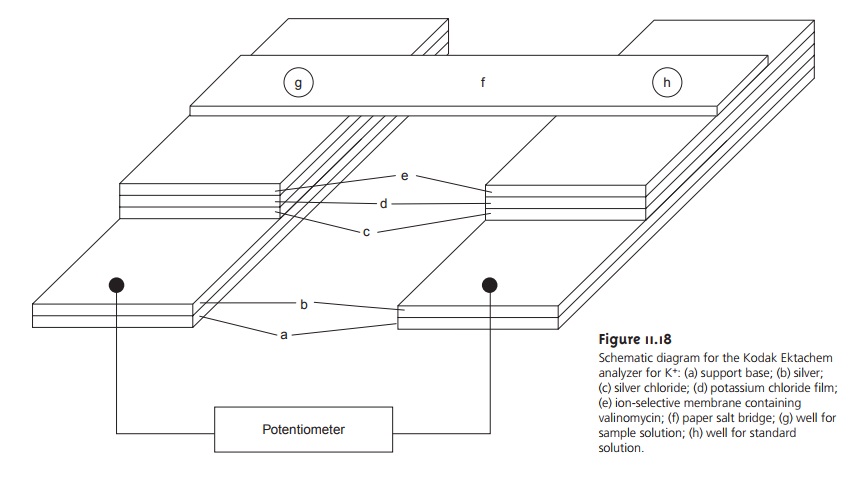 Accuracy: The accuracy of a potentiometric analysis is limited by the measure- ment error for the cell’s potential.

The working range for most ion-selective electrodes is from a maximum concentration of 0.1–1 M to a minimum concentration of 10–5 – 10–10 M. This broad working range extends from major to ultratrace ana- lytes, and is significantly greater than many other analytical methods. For conven- tional ion-selective electrodes, macro-sized samples with minimum volumes of 0.05–10 mL are necessary. Microelectrodes and specially designed analyzers, such as the Kodak Ektachem analyzer for K+ shown in Figure 11.18, may be used with ultramicro-sized samples provided that the sample taken for analysis is suffi- ciently large to be representative of the original sample. 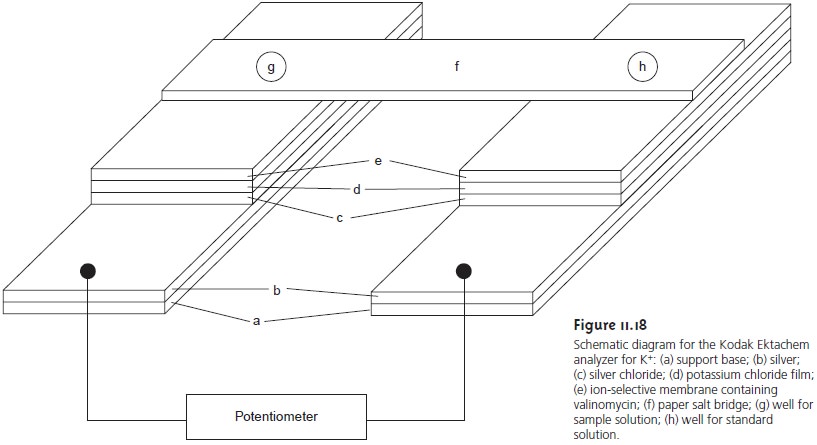 The accuracy of a potentiometric analysis is limited by the measure- ment error for the cell’s potential. Several factors contribute to this measurement error, including the contribution to the potential from interfering ions, the finite current drawn through the cell while measuring the potential, differences in the analyte’s activity coefficient in the sample and standard solutions, and liquid junction potentials. Errors in accuracy due to interfering ions often can be elimi- nated by including a separation step before the potentiometric analysis. Modern high-impedance potentiometers minimize errors due to the passage of current through the electrochemical cell. Errors due to activity coefficients and liquid junction potentials are minimized by matching the matrix of the standards to that of the sample. Even in the best circumstances, however, a difference in po- tential of approximately ±1 mV is observed for samples and standards at equal concentration.

The effect of an uncertainty in potential on the accuracy of a potentiometric method of analysis is evaluated using a propagation of uncertainty. For a membrane ion-selective electrode the general expression for potential is given as

where z is the charge of the analyte. From Table 4.9, the error in the cell potential, ∆Ecell is

The relative measurement error in concentration, therefore, is determined by the magnitude of the error in measuring the cell’s potential and by the charge of the an- alyte. Representative values are shown in Table 11.7 for ions with charges of ±1 and ±2, at a temperature of 25 °C. Accuracies of 1–5% for monovalent ions and 2–10% for divalent ions are typical. Although equation 11.22 was developed for membrane electrodes, it also applies to metallic electrodes of the first and second kind when z is replaced by n.

The precision of a potentiometric measurement is limited by variations in temperature and the sensitivity of the potentiometer. Under most conditions, and with simple, general-purpose potentiometers, the potential can be measured with a repeatability of ±0.1 mV. From Table 11.7 this result corresponds to an un- certainty of ±0.4% for monovalent analytes, and ±0.8% for divalent analytes. The reproducibility of potentiometric measurements is about a factor of 10 poorer.

The sensitivity of a potentiometric analysis is determined by the term RT/nF or RT/zF in the Nernst equation. Sensitivity is best for smaller values of n or z. 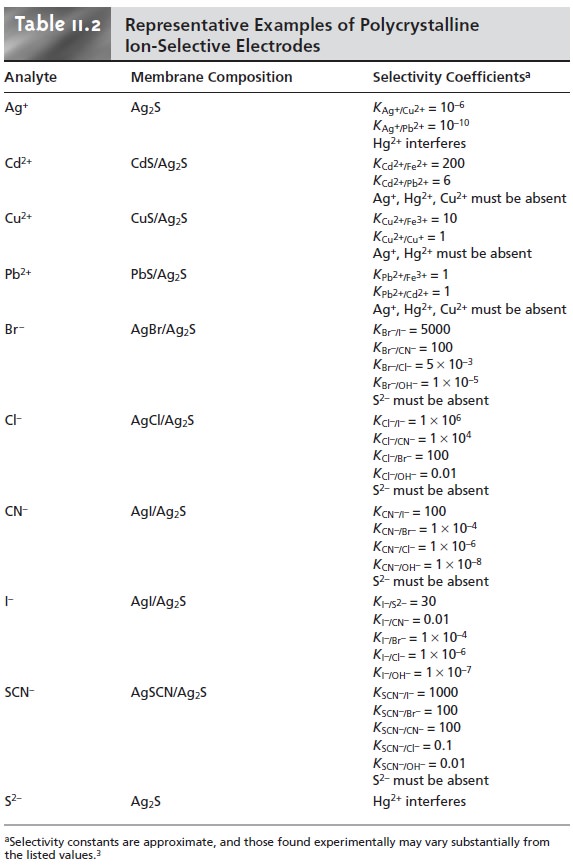 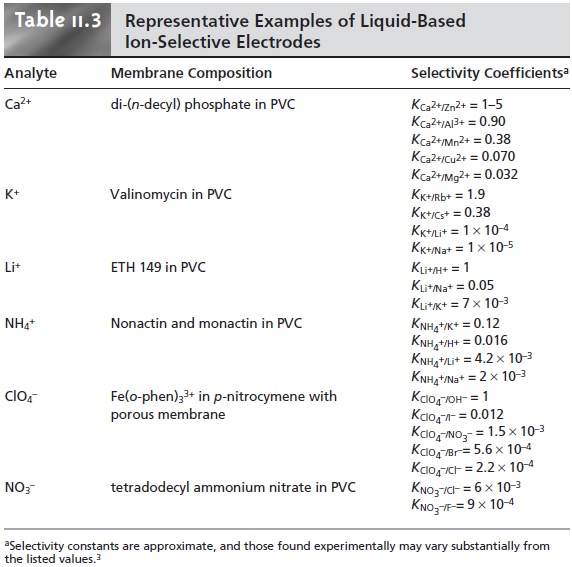 In comparison with competing methods, potentiome- try provides a rapid, relatively low-cost means for analyzing samples. Commercial instruments for measuring pH or potential are available in a variety of price ranges and include portable models for use in the field.