Although early voltammetric methods relied on the use of only two electrodes, modern voltammetry makes use of a three-electrode po-tentiostat, .

Although early voltammetric methods relied on the use of only two electrodes, modern voltammetry makes use of a three-electrode po-tentiostat, such as that shown in Figure 11.4. A time-dependent po- tential excitation signal is applied to the working electrode, chang- ing its potential relative to the fixed potential of the reference electrode. The resulting current between the working and auxiliary electrodes is measured. The auxiliary electrode is generally a plat- inum wire, and the SCE and Ag/AgCl electrode are common refer- ence electrodes. 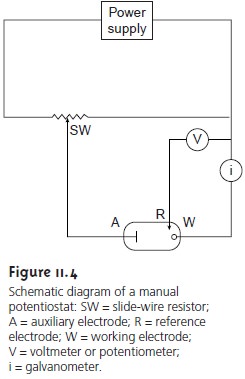 Several different materials have been used as working elec- trodes, including mercury, platinum, gold, silver, and carbon. The earliest voltammetric techniques, including polarography, used mercury for the working electrode. Since mercury is a liquid, the working electrode often consists of a drop suspended from the end of a capillary tube (Figure 11.26). In the hanging mercury drop electrode, or HMDE, a drop of the desired size is formed by the ac- tion of a micrometer screw that pushes the mercury through a narrow capillary tube. In the dropping mercury electrode, or DME, mercury drops form at the end of the capillary tube as a result of gravity. Unlike the HMDE, the mercury drop of a DME grows continuously and has a finite lifetime of several seconds. At the end of its lifetime the mercury drop is dislodged, either manually or by gravity, and replaced by a new drop. The static mercury drop electrode, or SMDE, uses a solenoid-driven plunger to control the flow of mercury. The SMDE can be used as either a hanging mercury drop electrode or as a dropping mercury electrode. A single activation of the solenoid momentarily lifts the plunger, allowing enough mercury to flow through the capillary to form a single drop. To obtain a dropping mercury elec- trode the solenoid is activated repeatedly. A mercury film electrode consists of a thin layer of mercury deposited on the surface of a solid carbon, platinum, or gold elec- trode. The solid electrode is placed in a solution of Hg2+ and held at a potential at which the reduction of Hg2+ to Hg is favorable, forming a thin mercury film. 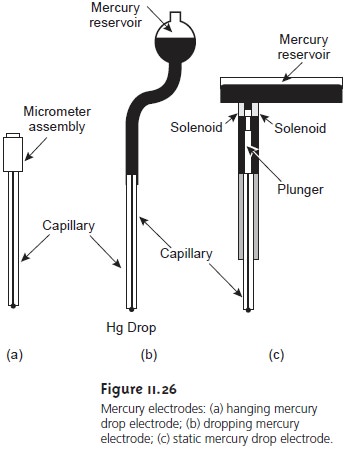 Mercury has several advantages as a working electrode. Perhaps its most im- portant advantage is its high overpotential for the reduction of H3O+ to H2, which allows for the application of potentials as negative as 1 V versus the SCE in acidic solutions, and –2 V versus the SCE in basic solutions. A species such as Zn2+, which is difficult to reduce at other electrodes without simultaneously reducing H3O+, is easily reduced at a mercury working electrode. Other advantages include the ability of metals to dissolve in the mercury, resulting in the formation of an amalgam, and the ability to easily renew the surface of the electrode by extruding a new drop. One limitation to its use as a working electrode is the ease with which Hg is oxidized. For this reason, mercury electrodes cannot be used as at potentials more positive than –0.3 V to +0.4 V versus the SCE, depending on the composition of the solution.

Solid electrodes constructed using platinum, gold, silver, or carbon may be used over a range of potentials, including potentials that are negative and positive with respect to the SCE. For example, the potential range for a Pt electrode extends from approximately +1.2 V to –0.2 V versus the SCE in acidic solutions and from +0.7 V to 1 V versus the SCE in basic solutions. Solid electrodes, therefore, can be used in place of mercury for many voltammetric analyses requiring negative po- tentials and for voltammetric analyses at positive potentials at which mercury elec- trodes cannot be used. Except for the carbon paste electrode, solid electrodes are fashioned into disks that are sealed into the end of an inert support and are in con- tact with an electrical lead (Figure 11.27). The carbon paste electrode is made by filling the cavity at the end of the inert support with a paste consisting of carbon particles and a viscous oil. Solid electrodes are not without problems, the most im- portant of which is the ease with which the electrode’s surface may be altered by the adsorption of solution species or the formation of oxide layers. For this reason solid electrodes need frequent reconditioning, either by applying an appropriate potential or by polishing. 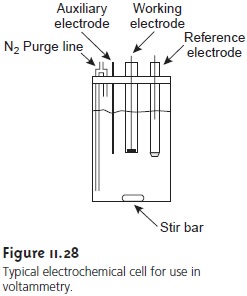 A typical arrangement for a voltammetric electrochemical cell is shown in Figure 11.28. Besides the working, reference, and auxiliary electrodes, the cell also in- cludes a N2 purge line for removing dissolved O2 and an optional stir bar. Electro- chemical cells are available in a variety of sizes, allowing for the analysis of solution volumes ranging from more than 100 mL to as small as 50 μL.