Coulometry may be used for the quantitative analysis of both inorganic and organic compounds.

Coulometry may be used for the quantitative analysis of both inorganic and organic compounds. Examples of controlled-potential and controlled-current coulometric methods are discussed in the following sections.

The majority of controlled-potential coulometric analyses involve the determination of inorganic cations and anions, including trace metals and halides. Table 11.8 provides a summary of several of these methods. 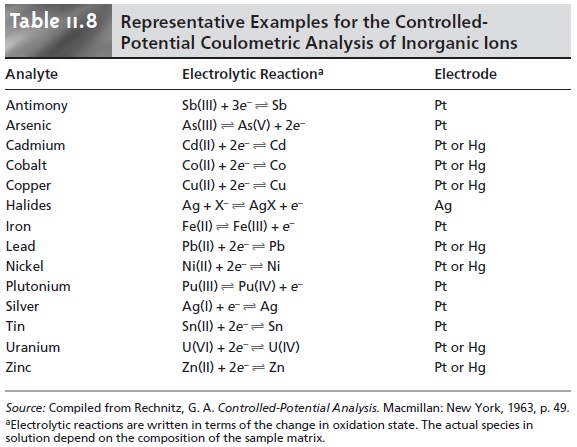 Another area where controlled-potential coulometry has found application is in nuclear chemistry, in which elements such as uranium and polonium can be determined at trace levels. For example, microgram quantities of uranium in a medium of H2SO4 can be determined by reducing U(VI) to U(IV) at a mercury working electrode.

Controlled-potential coulometry also can be applied to the quantitative analy- sis of organic compounds, although the number of applications is significantly less than that for inorganic analytes. One example is the six-electron reduction of a nitro group, –NO2, to a primary amine, –NH2, at a mercury electrode. Solutions of picric acid, for instance, can be analyzed by reducing to triaminophenol.

The use of a mediator makes controlled-current coulometry a more versatile analytical method than controlled-potential coulome- try. For example, the direct oxidation or reduction of a protein at the working elec- trode in controlled-potential coulometry is difficult if the protein’s active redox site lies deep within its structure. The controlled-current coulometric analysis of the protein is made possible, however, by coupling its oxidation or reduction to a medi- ator that is reduced or oxidized at the working electrode. Controlled-current coulo- metric methods have been developed for many of the same analytes that may be de- termined by conventional redox titrimetry. These methods, several of which are summarized in Table 11.9, also are called coulometric redox titrations.

Coupling the mediator’s oxidation or reduction to an acid–base, precipitation, or complexation reaction involving the analyte allows for the coulometric titration of analytes that are not easily oxidized or reduced. For example, when using H2O as a mediator, oxidation at the anode produces H3O+

while reduction at the cathode produces OH–.

If the oxidation or reduction of H2O is carried out externally using the generator cell shown in Figure 11.25, then H3O+ or OH– can be dispensed selectively into a solution containing a basic or acidic analyte. The resulting reaction is identical to that in an acid–base titration. Coulometric acid–base titrations have been used for the analysis of strong and weak acids and bases, in both aqueous and nonaqueous matrices. 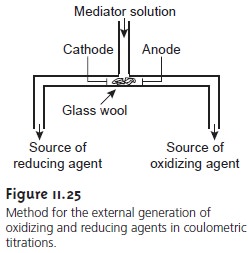 In comparison with conventional titrimetry, there are several advantages to the coulometric titrations listed in Tables 11.9 and 11.10. One advantage is that the electrochemical generation of a “titrant” that reacts immediately with the analyte al- lows the use of reagents whose instability prevents their preparation and storage as a standard solution. Thus, highly reactive reagents such as Ag2+ and Mn3+ can be used in coulometric titrations. Because it is relatively easy to measure small quantities of charge, coulometric titrations can be used to determine small quantities of analyte that cannot be measured accurately by a conventional titration. 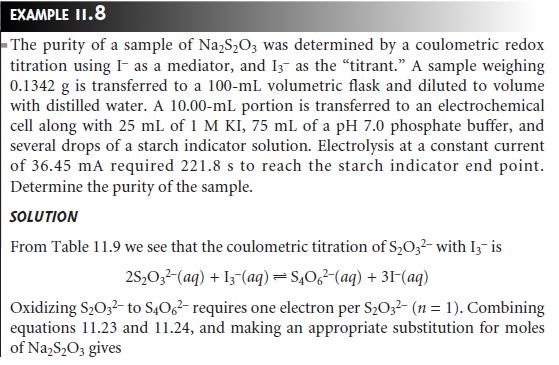 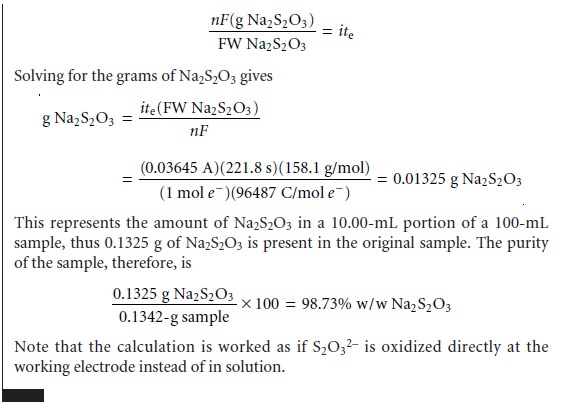 Every controlled-potential or controlled-current coulo- metric method has its own unique considerations. Nevertheless, the following pro- cedure for the determination of dichromate by a coulometric redox titration pro- vides an instructive example.