Quantitative voltammetry has been applied to a wide variety of sample types, including environmental samples, clinical samples, pharmaceu-tical formulations, steels, gasoline, and oil.

Quantitative voltammetry has been applied to a wide variety of sample types, including environmental samples, clinical samples, pharmaceu-tical formulations, steels, gasoline, and oil.

The choice of which voltammetric tech- nique to use depends on the sample’s characteristics, including the analyte’s ex- pected concentration and the location of the sample. Amperometry is best suited for use as a detector in flow systems or as a selective sensor for the rapid analysis of a single analyte. The portability of amperometric sensors, which are similar to po- tentiometric sensors, make them ideal for field studies.

Pulse polarography and stripping voltammetry can frequently be used inter- changeably, although each has its advantages and disadvantages. Pulse polarography is better for analyzing a wider range of inorganic and organic analytes because the need to preconcentrate the analyte at the electrode surface restricts the application of anodic and cathodic stripping voltammetry.

In any quantitative analysis the signal due to the analyte must be corrected for signals arising from other sources. The total measured current in any voltammetric experiment, itot, consists of two parts: that due to the analyte’s oxidation or reduction, ia, and a background, or residual, current, ir.

The residual current, in turn, has two sources. One source is a faradaic current due to the oxidation or reduction of trace impurities in the sample, ii. The other source is the charging current, ich, that is present whenever the working electrode’s poten- tial changes.

Faradaic currents due to impurities can usually be minimized by carefully preparing the sample. For example, one important impurity is dissolved O2, which is reduced first to H2O2 and then to H2O. Dissolved O2 is removed by bubbling an inert gas such as N2 through the sample before the analysis.

Two methods are commonly used to correct for the residual current. One method is to extrapolate the total measured current when the analyte’s faradaic current is zero.. The advantage of this method is that it does not require any additional data. On the other hand, extrapolation assumes that changes in the residual cur- rent with potential are predictable, which often is not the case. A second, and more rigorous, approach is to obtain a voltammogram for an appropriate blank. The blank’s residual current is then subtracted from the total current obtained with the sample.

The analysis of samples containing only a single electroactive analyte is straightforward. Any of the standardization methods can be used to establish the relationship between current and the concentration of analyte. 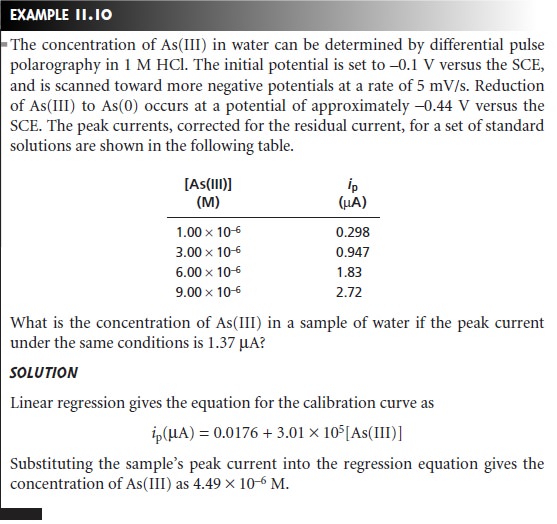 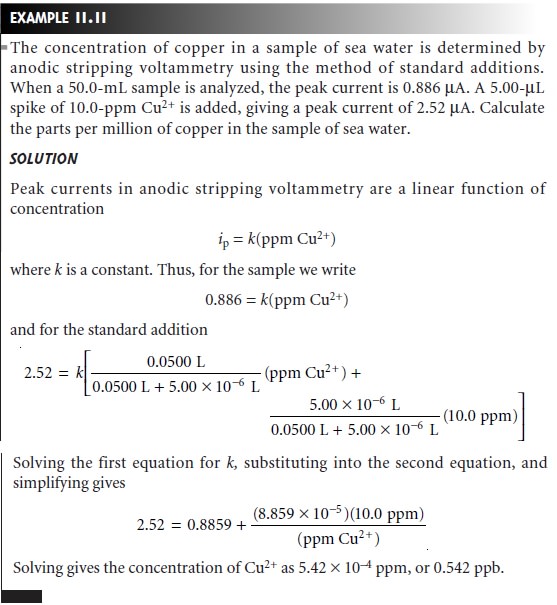 One advantage of voltammetry as a quantitative method of analysis is its capability for analyzing two or more analytes in a single sample. As long as the components behave independently, the resulting voltammo- gram for a multicomponent mixture is a summation of their respective individual voltammograms. If the separation between the half-wave potentials or peak poten- tials is sufficient, each component can be determined independently as if it were the only component in the sample (Figure 11.40). The minimum separation between the half-wave potentials or peak potentials for the independent analysis of two com- ponents depends on several factors, including the type of electrode and the poten- tial-excitation signal. For normal polarography the separation must be at least ±0.2–0.3 V, and for differential pulse voltammetry a minimum separation of ±0.04–0.05 V is needed. 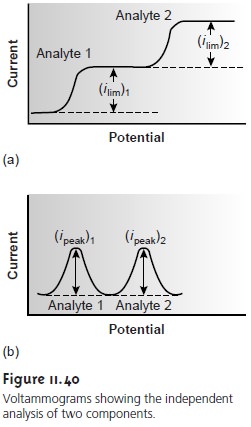 When the overlap between the voltammograms for two components pre- vents their independent analysis, a simultaneous analysis similar to that used in spectrophotometry may be possible. An example of this approach is outlined in Example 11.12. 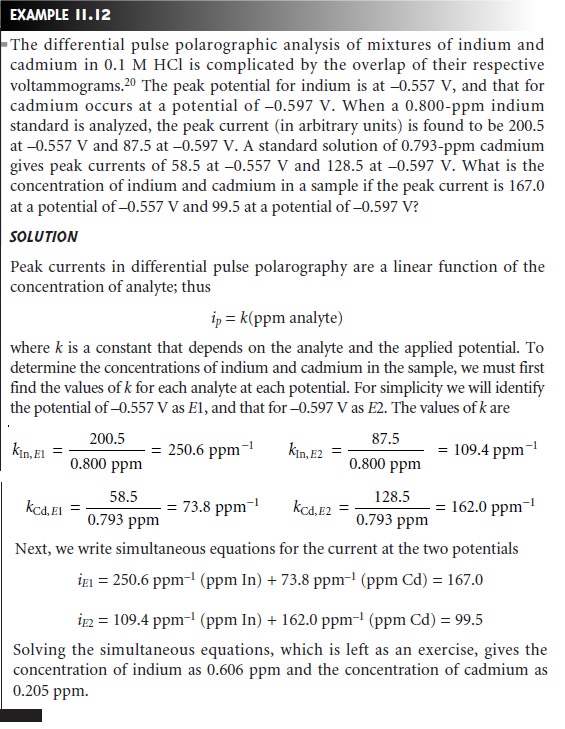 One area in which quantitative voltammetry has had a significant effect is in the analysis of trace metals in environmental samples. The most common samples are natural waters, including groundwater, lakes, rivers and streams, sea water, rain, and snow. Concentrations of trace metals at the parts-per- billion level can be determined using differential pulse polarography, whereas with anodic stripping voltammetry the determination of trace metals at the pptr (parts- per-trillion) level is possible. The combination of low detection limits and the capa- bility for the simultaneous analysis of several analytes makes differential pulse po- larography and anodic stripping voltammetry ideally suited for such samples.

One interesting application of anodic stripping voltammetry to the analysis of natural waters is the determination of the speciation, or chemical form, of the trace metals. The speciation of a trace metal is important because its bioavailability, toxi- city, and ease of transport through the environment often depend on its chemical form. For example, trace metals strongly bound to colloidal particles are generally not available to aquatic lifeforms and, therefore, are not toxic. Unfortunately, an- odic stripping voltammetry cannot distinguish the exact chemical form of a trace metal as closely related species, such as Pb2+ and PbCl+, yield only a single stripping peak. Instead, trace metals are divided into several “operationally defined” cate- gories that have environmental significance.

Several speciation schemes have been developed, but we consider only the speciation scheme proposed by Batley and Florence, which uses a combination of anodic stripping voltammetry with ion-exchange and UV irradiation to divide solu- ble trace metals into seven classes. Anodic stripping voltammetry in a pH 4.8 acetic acid buffer is used to distinguish labile metals present as hydrated ions, weakly bound complexes, or weakly adsorbed on colloidal surfaces from those metals that are bound in stronger complexes or strongly adsorbed. Only those metals that are hydrated, weakly bound, or weakly adsorbed deposit at the electrode. Ion exchange and UV irradiation are used to further subdivide the trace metals. A Chelex-100 ion-exchange resin is used to distinguish between ionic metals and strongly bound metals, whereas UV radiation is used to separate metals bound to organic and inor- ganic phases. Table 11.12 shows how trace metals are divided into seven classes using these three experimental techniques. The analysis of sea water samples, for example, showed that cadmium, copper, and lead were primarily present as labile organic complexes or as labile adsorbates on organic colloids (see group II, Table 11.12).

Differential pulse polarography and stripping voltammetry have been applied to the analysis of trace metals in airborne particulates, incinerator fly ash, rocks, minerals, and sediments.

The trace metals, of course, must be brought into solution by digesting or extracting before the voltammetric analysis.

Amperometric sensors also are used to analyze environmental samples. For ex- ample, the dissolved O2 sensor described earlier is routinely used for the determina- tion of dissolved oxygen and biochemical oxygen demand, or BOD, in waters and wastewaters. The latter test, which is a measure of the amount of oxygen required by aquatic bacteria during the decomposition of organic matter, is of importance in evaluating the efficiency of wastewater treatment plants and in monitoring organic pollution in natural waters. A high BOD corresponds to a high concentration of or- ganic material that may seriously deplete the level of dissolved oxygen in the water. Other amperometric sensors have been developed to monitor anionic surfactants in water, and CO2, H2SO4, and NH3 in atmospheric gases.

Differential pulse polarography and stripping voltammetry have been used to determine the concentration of trace metals in a variety of matrices, including blood, urine, and tissue samples. The determination of lead in blood is of considerable interest due to concerns about lead poisoning. Because the concen- tration of lead in blood is so small, anodic stripping voltammetry frequently is the method of choice. The analysis is complicated, however, by the presence of pro- teins that may adsorb at the surface of the mercury electrode, inhibiting either the deposition or stripping of lead. In addition, proteins may prevent the electrodepo- sition of lead through the formation of stable, nonlabile complexes. For these rea- sons samples of whole blood must be digested or ashed before the analysis. Differ- ential pulse polarography is one of the few techniques that can be used for the routine quantitative analysis of drugs in biological fluids at concentrations of less than 10–6 M.23 Amperometric sensors based on enzyme catalysts also have wide ap- plicability.24 Table 11.13 provides a partial list of enzymatic amperometric sensors. 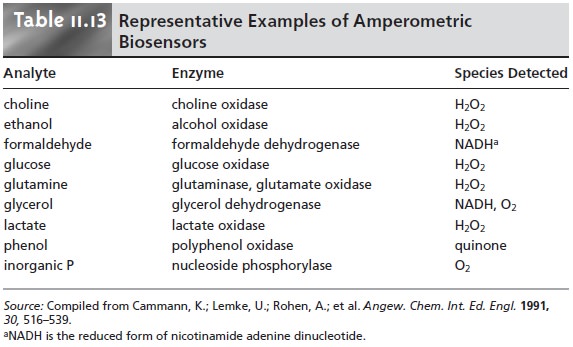 Besides environmental and clinical samples, differential pulse polarography and stripping voltammetry have been used for the analysis of trace metals in other samples, including food, steels and other alloys, gasoline, gun- powder residues, and pharmaceuticals.

Voltammetry is also an important tool for the quantitative analysis of organics, particularly in the pharmaceutical industry, in which it is used to determine the concentration of drugs and vitamins in formula- tions.23 For example, voltammetric methods have been developed for the quantita- tive analysis of vitamin A, niacinamide, and riboflavin. When the compound of in- terest is not electroactive, it often can be derivatized to an electroactive form. One example is the differential pulse polarographic determination of sulfanilamide, in which it is converted into an electroactive azo dye by coupling with sulfamic acid and 1-naphthol.