1. Explain what is meant by Cartesian coordinate system? 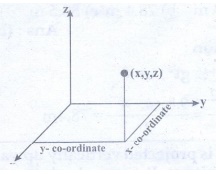 At any given instant of time, the frame of reference with respect to which the position of the object described interms of position co-ordinates (x, y, z) is called Cartesian Co-ordinate system.

2. Define a vector. Give examples

The physical quantity which is described by both magnitude and direction are called vector. Examples : Force, Velocity, Displacement, Acceleration.

3. Define a scalar. Give examples

The physical quantity which is described only by magnitude are called scalar.

4. Write a short note on the scalar product between two vectors.

The scalar product (or) dot product of two vectors is defined as the product of the magnitude of both the vectors and the cosine of the angle between them.

5. Write a short note on vector product between two vectors.

6. How do you deduce that two vectors are perpendicular?

(i) The scalar product of two vectors

then these two vectors are perpendicular to each other because cos 90° = 0, then

are said to be mutually orthogonal.

are orthogonal to each other.

Distance : Distance is the actual path length travelled by an object in the given interval of time.

Displacement : Displacement is the difference between the final and initial positions of the object in a given interval of time.

Velocity: Velocity is equal to rate of change of position vector with respect to time.

Velocity is a vector quantity,

Speed: The speed is defined as the ratio of total path length travelled by the particle in a time interval. It is a scalar quantity.

● The acceleration of the particle at an instant is equal to rate of change of Velocity.

● Acceleration is a vector quantity. Its SI unit is ms-2 and its dimentional formula is

10. What is the difference between velocity and average velocity.

1. Velocity is equal to rate of change of position vector with respect to time.

2. It tells about the direction of motion of the particle.

1. The average velocity is defined as rate of the displacement vector to the corresponding time interval.

One radian is the angle substended at the center of a circle by an arc that is equal in length to the radius of the circle.

13. What is non uniform circular motion?

14. Write down the kinematic equations for angular motion.

15. Write down the expression for angle made by resultant acceleration and radius vector in the non uniform circular motion.

The resultant acceleration makes an angle θ with radius vector