Projectile under an angular projection

This projectile motion takes place when the initial velocity is not horizontal, but at some angle with the vertical.

Projectile under an angular projection

This projectile motion takes place when the initial velocity is not horizontal, but at some angle with the vertical, as shown in Figure 2.42. 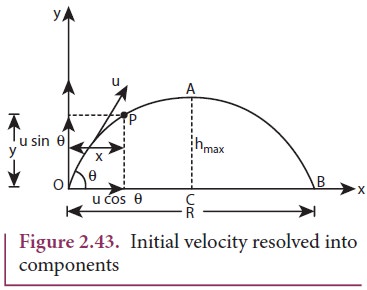 where ux = u cosθ is the horizontal component and uy = usinθ the vertical component of velocity.

Since the acceleration due to gravity is in the direction opposite to the direction of vertical component uy, this component will gradually reduce to zero at the maximum height of the projectile. At this maximum height, the same gravitational force will push the projectile to move downward and fall to the ground. There is no acceleration along the x direction throughout the motion. So, the horizontal component of the velocity (ux = u cosθ) remains the same till the object reaches the ground.

Hence after the time t, the velocity along horizontal motion vx = ux+ axt = ux = u cos θ

Next, for the vertical motion vy = uy+ ayt

Here uy= u sinθ, ay = - g (acceleration due to gravity acts opposite to the motion). Thus

Thus the path followed by the projectile is an inverted parabola .

The maximum vertical distance travelled by the projectile during its journey is called maximum height. This is determined as follows:

For the vertical part of the motion,

The total time taken by the projectile from the point of projection till it hits the horizontal plane is called time of flight.

This time of flight is the time taken by the projectile to go from point O to B via point A (Figure 2.43)

The maximum horizontal distance between the point of projection and the point on the horizontal plane where the projectile hits the ground is called horizontal range (R). This is found easily since the horizontal component of initial velocity remains the same. We can write

The horizontal range directly depends on the initial speed (u) and the sine of angle of projection (θ ). It inversely depends on acceleration due to gravity ‘g’

For a given initial speed u, the maximum possible range is reached when sin2θ is maximum, sin2θ = 1. This implies 2θ = π /2

This means that if the particle is projected at 45 degrees with respect to horizontal, it attains maximum range, given by. 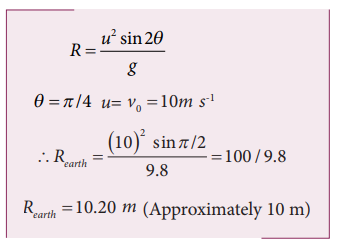 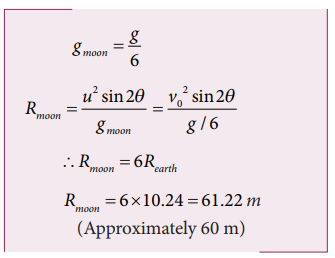 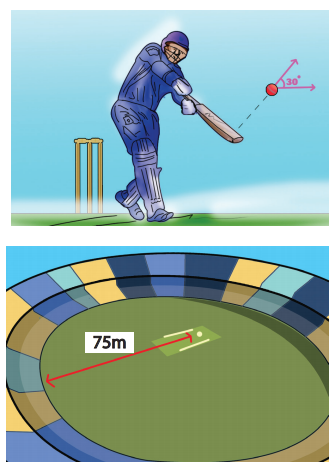