Quantitative platelet defects are relatively common (thrombocy-topenia), but qualitative defects can also occur. With qualitative defects, the number of platelets may be normal, but the platelets do not function normally. Platelet function is most commonly evaluated by the bleeding time; however, this test is a crude mea-surement at best.

An important functional platelet disorder is that induced by as-pirin. Even small amounts of aspirin reduce normal platelet ag-gregation, and the prolonged bleeding time lasts for several days after aspirin ingestion. Although this does not cause bleeding in most people, patients with a coagulation disorder (eg, hemophilia) or thrombocytopenia can have significant bleeding after taking as-pirin, particularly if invasive procedures or trauma has occurred.

NSAIDs can also inhibit platelet function, but the effect is not as prolonged as with aspirin (about 5 days versus 7 to 10 days). Other causes of platelet dysfunction include end-stage renal dis-ease, possibly from metabolic products affecting platelet function; MDS; multiple myeloma (due to abnormal protein interfering with platelet function); cardiopulmonary bypass; and other med-ications and substances (Chart 33-13). 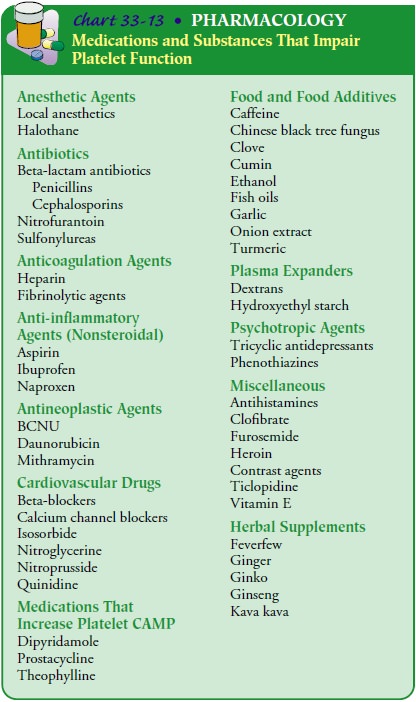 Bleeding may be mild or severe. Its extent is not necessarily corre-lated with the platelet count or with tests that measure coagulation (prothrombin time [PT], partial thromboplastin time [PTT]). Ecchymoses are common, particularly on the extremities. Patients with platelet dysfunction may be at risk for significant bleeding after trauma or invasive procedures (eg, biopsy, dental extraction).

If the platelet dysfunction is caused by medication, use of the of-fending medication should be stopped, if possible, particularly when bleeding occurs. If platelet dysfunction is marked, bleeding can often be prevented by transfusion of normal platelets before invasive procedures. Amniocaproic acid (EACA; Amicar) may be required to prevent significant bleeding after such procedures.

Patients with significant platelet dysfunction need to be instructed to avoid agents that can diminish platelet function, such as certain over-the-counter medications, herbs, nutritional supplements, and alcohol. They also need to be assisted to serve as their own advo-cates and to inform their health care providers (including dentists) of the underlying condition before any invasive procedure is per-formed, so that appropriate steps can be initiated to diminish the risk of bleeding. Bleeding precautions should be initiated as ap-propriate (see Chart 33-10). 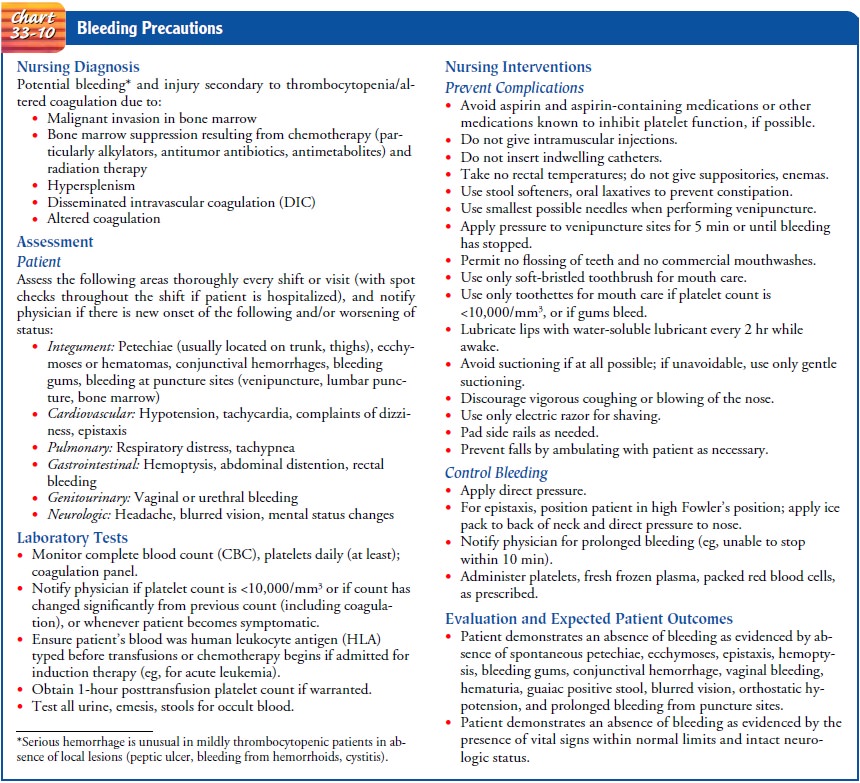