Normal hemostatic mechanisms can control bleeding from ves-sels and prevent spontaneous bleeding. The bleeding vessel con-stricts and platelets aggregate at the site, forming an unstable hemostatic plug. Circulating coagulation factors are activated on the surface of these aggregated platelets, forming fibrin, which anchors the platelet plug to the site of injury.

The failure of normal hemostatic mechanisms can result in bleeding, which is severe at times. This bleeding is commonly provoked by trauma, but in certain circumstances it can occur spontaneously. When the source is platelet or coagulation factor abnormalities, the site of spontaneous bleeding can be anywhere in the body. When the defect is caused by vascular abnormalities, the site of bleeding may be more localized. Some patients have defects in more than one hemostatic mechanism simultaneously.

In a variety of situations, the bone marrow may be stimulated to increase platelet production (thrombopoiesis). The increased production may be a reactive response, as in a compensatory re-sponse to significant bleeding, or a more general response to in-crease hematopoiesis, as in iron deficiency anemia. Sometimes, the increase in platelets does not result from increased production but from a loss in platelet pooling within the spleen. The spleen typically holds about one third of the circulating platelets at any time. If the spleen is lost (eg, splenectomy), the platelet reservoir is also lost, and an abnormally high amount of platelets enter the circulation. In time, the rate of thrombopoiesis slows to reestab-lish a more normal platelet level.

Signs and symptoms of bleeding disorders vary depending on the type of defect. A careful history and physical examination can be very useful in determining the source of the hemostatic defect. Ab-normalities of the vascular system give rise to local bleeding, usu-ally into the skin. Because platelets are primarily responsible for stopping bleeding from small vessels, patients with platelet defects develop petechiae, often in clusters; these are seen on the skin and mucous membranes but also occur throughout the body. Bleed-ing from platelet disorders can be severe. Unless the platelet dis-order is severe, bleeding can often be stopped promptly when local pressure is applied; it does not typically recur when the pressure is released.

In contrast, coagulation factor defects do not tend to cause su-perficial bleeding, because the primary hemostatic mechanisms are still intact. Instead, bleeding occurs deeper within the body (eg, subcutaneous or intramuscular hematomas, hemorrhage into joint spaces). External bleeding diminishes very slowly when local pressure is applied; it often recurs several hours after pressure is removed. For example, severe bleeding may start several hours after a tooth extraction. Risk factors for bleeding are provided in Chart 33-7. 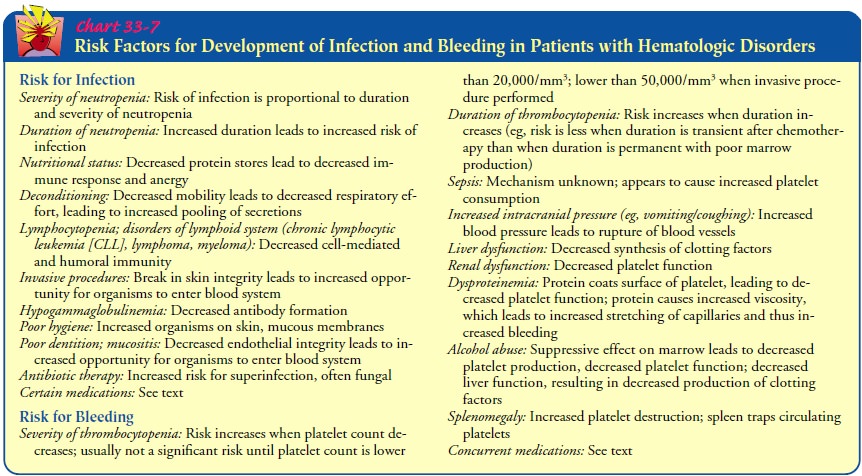 Management varies based on the underlying cause of the bleed-ing disorder. If bleeding is significant, transfusions of blood prod-ucts are indicated. The specific blood product used is determined by the underlying defect. In specific situations in which fibrino-lysis is excessive, hemostatic agents such as aminocaproic acid (Amicar) can be used to inhibit this process. This agent must be used with caution, because excessive inhibition of fibrinolysis can result in thrombosis.

Patients who have bleeding disorders or who have the potential for development of such disorders as a result of disease or thera-peutic agents must be taught to observe themselves carefully and frequently for bleeding. They need to understand the importance of avoiding activities that increase the risk of bleeding, such as contact sports. The skin is observed for petechiae and ecchymoses (bruises) and the nose and gums for bleeding. Hospitalized pa-tients may be monitored for bleeding by testing all drainage and excreta (feces, urine, emesis, and gastric drainage) for occult as well as obvious blood. Outpatients are often given fecal occult blood screening cards to detect occult blood in stools.