DIC is not a disease but a sign of an underlying condition.

DIC is not a disease but a sign of an underlying condition. DIC may be triggered by sepsis, trauma, cancer, shock, abruptio pla-centae, toxins, or allergic reactions (Chart 33-14). It is potentially life-threatening. 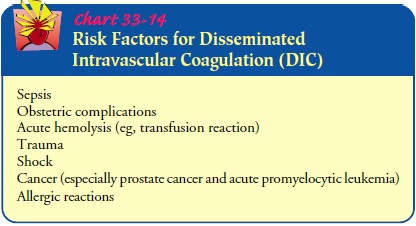 In DIC, the normal hemostatic mechanisms are altered so that a massive amount of tiny clots forms in the microcirculation. Ini-tially, the coagulation time is normal. However, as the platelets and clotting factors are consumed to form the microthrombi, coagulation fails. Thus, the paradoxical result of excessive clotting is bleeding. The clinical manifestations of DIC are reflected in the organs, which are affected either by excessive clot formation (with resultant ischemia to all or part of the organ) or by bleeding. The bleeding is characterized by low platelet and fibrinogen levels; prolonged PT, PTT, and thrombin time; and elevated fibrin degradation products (D-dimers) (Table 33-6).

The mortality rate can exceed 80% of patients who develop DIC. Identification of patients who are at risk for DIC and recog-nition of the early clinical manifestations of this syndrome can result in earlier medical intervention, which may improve the prognosis. However, the primary prognostic factor is the ability to treat the underlying condition that precipitated DIC.

Patients with DIC may bleed from mucous membranes, venipunc-ture sites, and the gastrointestinal and urinary tracts. The bleeding can range from minimal occult internal bleeding to profuse hemorrhage from all orifices. Patients may also develop organ dysfunc-tion, such as renal failure and pulmonary and multifocal central nervous system infarctions as a result of microthromboses, macro-thromboses, or hemorrhages.

During the initial process of DIC, the patient may have no new symptoms, the only manifestation being a progressive decrease in the platelet count. As the thrombosis becomes more extensive, the patient exhibits signs and symptoms of thrombosis in the organs involved. Then, as the clotting factors and platelets are consumed to form these thrombi, bleeding occurs. Initially the bleeding is subtle, but it can develop into frank hemorrhage. Signs and symp-toms depend on the organs involved and are listed in Table 33-7.

The most important management issue is treating the underlying cause of the DIC. Until the cause is controlled, the mechanism for DIC will persist. A second goal is to correct the secondary effects of tissue ischemia by improving oxygenation, replacing fluids, cor-recting electrolyte imbalances, and administering vasopressor med-ications. If serious hemorrhage occurs, the depleted coagulation factors and platelets may be replaced to reestablish the potential for normal hemostasis and thereby diminish bleeding. Cryoprecipitate is given to replace fibrinogen and factors V and VII; fresh frozen plasma is administered to replace other coagulation factors.

A controversial method to interrupt the thrombosis process is the use of heparin infusion. Heparin may inhibit the formation of microthrombi and thus permit perfusion of the organs (skin, kidneys, or brain) to resume. Heparin is typically reserved for the patient in whom thrombotic manifestations predominate or in whom extensive blood component replacement fails to halt the hemorrhage or increase fibrinogen and other clotting levels. When heparin is administered, bleeding may actually worsen initially until the thrombotic process is interrupted. Consumed platelets and clotting factors need to be replaced. The effectiveness of heparin can best be determined by observing for normalization of the plasma fibrinogen concentration and diminishing signs of bleeding.