Aplastic anemia is a rather rare disease caused by a decrease in or damage to marrow stem cells, damage to the microenvironment within the marrow, and replacement of the marrow with fat.

Aplastic anemia is a rather rare disease caused by a decrease in or damage to marrow stem cells, damage to the microenvironment within the marrow, and replacement of the marrow with fat. It re-sults in bone marrow aplasia (markedly reduced hematopoiesis). Therefore, in addition to severe anemia, significant neutropenia and thrombocytopenia (a deficiency of platelets) are also seen.

Aplastic anemia can be congenital or acquired, but most cases are idiopathic (ie, without apparent cause). Infections and pregnancy can trigger it, or it may be caused by certain medications, chem-icals, or radiation damage (Chart 33-3). Agents that regularly produce marrow aplasia include benzene and benzene derivatives (eg, airplane glue). Certain toxic materials, such as inorganic ar-senic and several pesticides (including DDT, which is no longer used or available in the United States), have also been implicated as potential causes. Various medications have been associated with aplastic anemia. 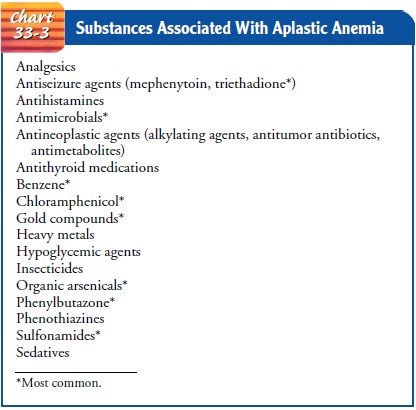 The manifestations of aplastic anemia are often insidious. Com-plications resulting from bone marrow failure may occur before the diagnosis is established.

Typical complications are infection and symptoms of anemia (eg, fatigue, pallor, dyspnea). Purpura (bruising) may develop later and should trigger a CBC and hema-tologic evaluation if these were not performed initially. If the patient has had repeated throat infections, cervical lymphaden-opathy may be seen. Other lymphadenopathies and splenomegaly sometimes occur. Retinal hemorrhages are common.

In many situations, aplastic anemia occurs when a medication or chemical is ingested in toxic amounts. However, in a few people, it develops after a medication has been taken at the recommended dosage. This may be considered an idiosyncratic reaction in those who are highly susceptible, possibly caused by a genetic defect in the medication biotransformation or elimination process. A bone marrow aspirate shows an extremely hypoplastic or even aplastic (very few to no cells) marrow replaced with fat.

It is presumed that the lymphocytes of patients with aplastic ane-mia destroy the stem cells and consequently impair the produc-tion of RBCs, WBCs, and platelets. Despite its severity, aplastic anemia can be successfully treated in most people. Potentially, those who are younger than 60 years of age, who are otherwise healthy, and who have a compatible donor can be cured of the dis-ease by a bone marrow transplantaton (BMT) or peripheral stem cell transplantation (BSCT). In others, the disease can be managed with immunosuppressive therapy. A combination of antithymo-cyte globulin and cyclosporine is used most commonly. Immuno-suppressants prevent the patient‚Äôs lymphocytes from destroying the stem cells. If relapse occurs (ie, the patient becomes pancy-topenic again), reinstitution of the same immunologic agents may induce another remission. Corticosteroids are not very useful as an immunosuppressive agent, because patients with aplastic anemia appear particularly susceptible to the development of bone com-plications from corticosteroids (ie, aseptic necrosis of the head of the femur).

Supportive therapy plays a major role in the management of aplastic anemia. Any offending agent is discontinued. The patient is supported with transfusions of RBCs and platelets as necessary. Death usually is caused by hemorrhage or infection.

Patients with aplastic anemia are vulnerable to problems related to RBC, WBC, and platelet deficiencies. They should be assessed carefully for signs of infection and bleeding. Specific interven-tions are delineated in the sections on neutropenia and thrombo-cytopenia.