1. When a car takes a sudden left turn in the curved road, passengers are pushed towards the right due to

(a) inertia of direction

(b) inertia of motion

2. An object of mass m held against a vertical wall by applying horizontal force F as shown in the figure. The minimum value of the force F is

3. A vehicle is moving along the positive x direction, if sudden brake is applied, then

(c) no frictional force acts on the vehicle

4. A book is at rest on the table which exerts a normal force on the book. If this force is considered as reaction force, what is the action force according to Newton’s third law?

(a) Gravitational force exerted by Earth on the book

(b) Gravitational force exerted by the book on Earth

(c) Normal force exerted by the book on the table

(d) None of the above

5. Two masses m1 and m2 are experiencing the same force where m1< m2. The ratio of their acceleration a1/a2 is

(d) all the three cases 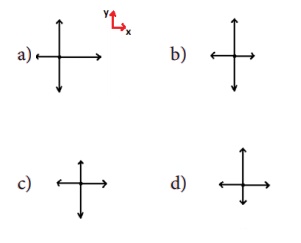 7. A particle of mass m sliding on the smooth double inclined plane (shown in figure) will experience 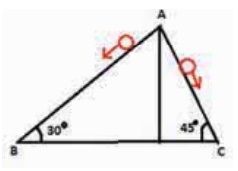 (a) greater acceleration along the path AB

(b) greater acceleration along the path AC

(c) same acceleration in both the paths

(d) no acceleration in both the paths.

9. Force acting on the particle moving with constant speed is

(b) need not be zero

10. An object of mass m begins to move on the plane inclined at an angle θ. The coefficient of static friction of inclined surface is μs. The maximum static friction experienced by the mass is

11. When the object is moving at constant velocity on the rough surface,

(a) net force on the object is zero

(b) no force acts on the object

(c) only external force acts on the object

(d) only kinetic friction acts on the object

12. When an object is at rest on the inclined rough surface,

(a) static and kinetic frictions acting on the object is zero

(d) static and kinetic frictions are not zero

13. The centrifugal force appears to exist

(a) only in inertial frames

(b) only in rotating frames

(c) in any accelerated frame

(d) both in inertial and non-inertial frames

14. Choose the correct statement from the following

(a) Centrifugal and centripetal forces are action reaction pairs

(b) Centripetal forces is a natural force

15. If a person moving from pole to equator, the centrifugal force acting on him

(d) increases and then decreases