If a stone of mass 0.25 kg tied to a string executes uniform circular motion with a speed of 2 m s-1 of radius 3 m, what is the magnitude of tensional force acting on the stone?

The Moon orbits the Earth once in 27.3 days in an almost circular orbit. Calculate the centripetal acceleration experienced by the Earth? (Radius of the Earth is 6.4 × 106 m)

The centripetal acceleration is given by a = v2/r.  This expression explicitly depends on Moon’s speed which is non trivial. We can work with the formula

am is centripetal acceleration of the Moon due to Earth’s gravity.

Rm is the distance between Earth and the Moon, which is 60 times the radius of the Earth. 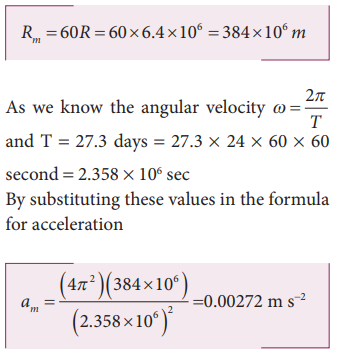 The centripetal acceleration of Moon towards the Earth is 0.00272 m s-2

Solved Example Problems for Vehicle on a leveled circular road 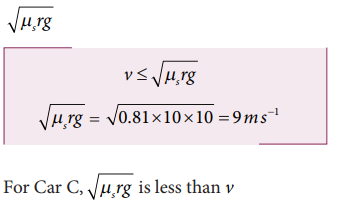 Calculate the centrifugal force experienced by a man of 60 kg standing at Chennai? (Given: Latitude of Chennai is 13°

The  centrifugal force is given by Fc = mω2 R cosθ

where T is time period of the Earth (24 hours)