When two particles interact with each other, they exert equal and opposite forces on each other. The particle 1 exerts force

on particle 1, according to Newton’s third law.

In terms of momentum of particles, the force on each particle (Newton’s second law) can be written as

is the momentum of particle 2. This changes due to 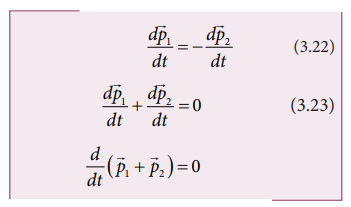 is the total linear momentum of the two particles (

If there are no external forces acting on the system, then the total linear momentum of the system (

) is always a constant vector. In otherwords, the total linear momentum of the system is conserved in time. Here the word ‘conserve’ means that

can vary,in such a way that

is a constant vector.

Identify the internal and external forces acting on the following systems.

a. Earth alone as a system

b. Earth and Sun as a system

c. Our body as a system while walking.

d. Our body + Earth as a system

a. Earth alone as a system

c. Our body as a system

While walking, we exert a force on the Earth and Earth exerts an equal and opposite force on our body. If our body alone is considered as a system, then the force exerted by the Earth on our body is external. 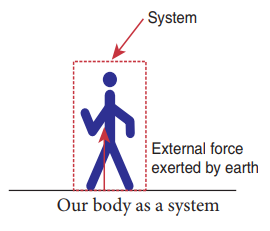 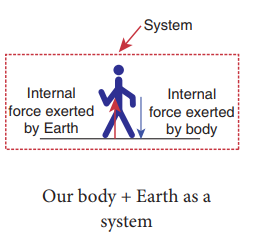 Meaning of law of conservation of momentum

1. The Law of conservation of linear momentum is a vector law. It implies that both the magnitude and direction of total linear momentum are constant. In some cases, this total momentum can also be zero.

2. To analyse the motion of a particle, we can either use Newton’s second law or the law of conservation of linear momentum. Newton’s second law requires us to specify the forces involved in the process. This is difficult to specify in real situations. But conservation of linear momentum does not require any force involved in the process. It is covenient and hence important.

For example, when two particles collide, the forces exerted by these two particles on each other is difficult to specify. But it is easier to apply conservation of linear momentum during the collision process. 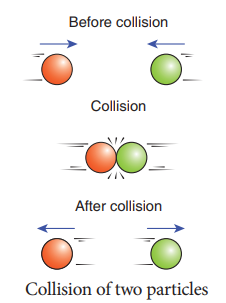 Consider the firing of a gun. Here the system is Gun+bullet. Initially the gun and bullet are at rest, hence the total linear momentum of the system is zero. Let

be the momentum of the bullet and

the momentum of the gun before firing. Since initially both are at rest,

A more accurate calculation is covered in section 4.4. It is to be noted that the total momentum vector before and after collison points in the same direction. This simply means that the total linear momentum is constant before and after the collision. At the time of collision, each particle exerts a force on the other. As the two particles are considered as a system, these forces are only internal, and the total linear momentum cannot be altered by internal forces.

If a very large force acts on an object for a very short duration, then the force is called impulsive force or impulse.

If a force (F) acts on the object in a very short interval of time (∆t), from Newton’s second law in magnitude form

Integrating over time from an initial time ti to a final time t f , we get 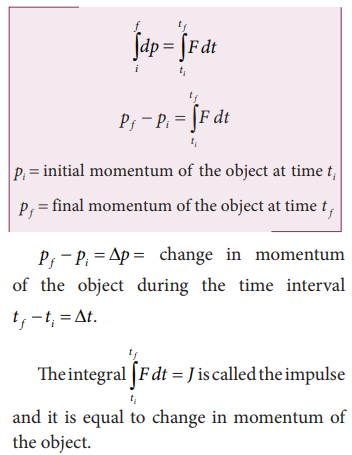 If the force is constant over the time interval, then

Equation (3.24) is called the ‘impulse-momentum equation’.

For a constant force, the impulse is denoted as J = F∆ t and it is also equal to change in momentum ( ∆p) of the object over the time interval ∆t.

The impulse can also be written in terms of the average force. Since ∆p is change in momentum of the object and is equal to impulse (J), we have 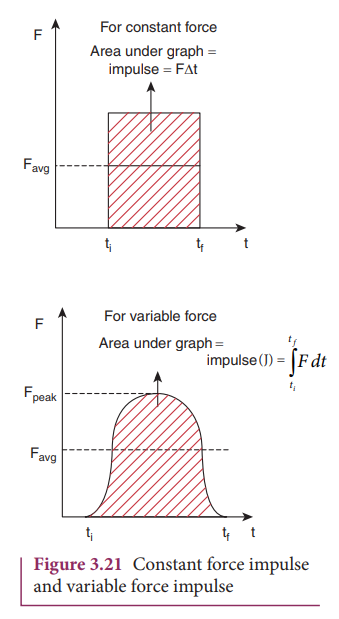 1. When a cricket player catches the ball, he pulls his hands gradually in the direction of the ball’s motion. Why? 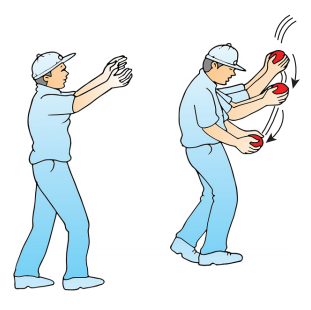 2. When a car meets with an accident, its momentum reduces drastically in a very short time. This is very dangerous for the passengers inside the car since they will experience a large force. To prevent this fatal shock, cars are designed with air bags in such a way that when the car meets with an accident, the momentum of the passengers will reduce slowly so that the average force acting on them will be smaller. 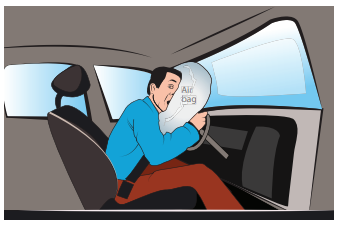 4. Jumping on a concrete cemented floor is more dangerous than jumping on the sand. Sand brings the body to rest slowly than the concrete floor, so that the average force experienced by the body will be lesser. 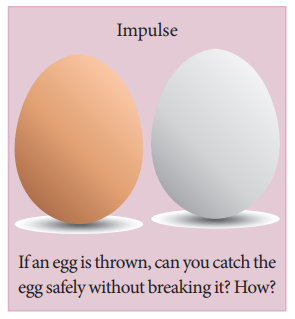 Calculate the impulse and average force acting on the object in both the cases. 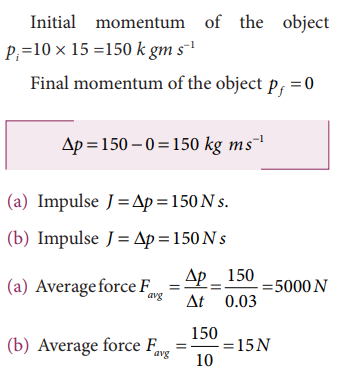 We see that, impulse is the same in both cases, but the average force is different.