1. Explain the concept of inertia. Write two examples each for inertia of motion, inertia of rest and inertia of direction.

4. Show that impulse is the change of momentum.

5. Using free body diagram, show that it is easy to pull an object than to push it.

7. What is the meaning by ‘pseudo force’?

8. State the empirical laws of static and kinetic friction.

10. What are inertial frames?

11. Under what condition will a car skid on a leveled circular road?

1. Prove the law of conservation of linear momentum. Use it to find the recoil velocity of a gun when a bullet is fired from it.

3. Explain the motion of blocks connected by a string in i) Vertical motion ii) Horizontal motion.

4. Briefly explain the origin of friction. Show that in an inclined plane, angle of friction is equal to angle of repose.

6. Explain the similarities and differences of centripetal and centrifugal forces.

9. Describe the method of measuring angle of repose.

10. Explain the need for banking of tracks.

11. Calculate the centripetal acceleration of Moon towards the Earth.

1. A force of 50N act on the object of mass 20 kg. shown in the figure. Calculate the acceleration of the object in x and y directions. 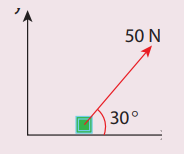 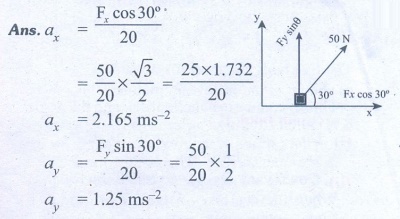 2. A spider of mass 50 g is hanging on a string of a cob web as shown in the figure. What is the tension in the string? 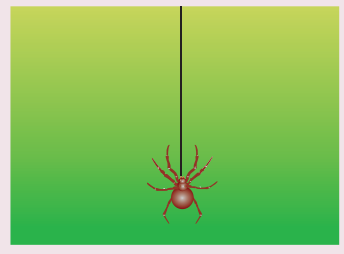 3. What is the reading shown in spring balance? 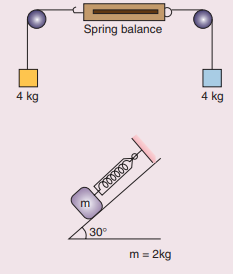 Zero, 9.8 N. The weight of the body is equal to the acceleration due to gravity.

a. Identify the forces acting on each book and draw the free body diagram.

b. Identify the forces exerted by each book on the other.

Forces on book A:

(i) Downward gravitational force exerted by the Earth (mAg)

The free body diagram for book A is as shown in the following picture.

Force on book B

5. A bob attached to the string oscillates back and forth. Resolve the forces acting on the bob in to components. What is the acceleration experience by the bob at an angle θ.

(i) The radial force = T - mg cos θ provides centripetal force but no torque about support O. 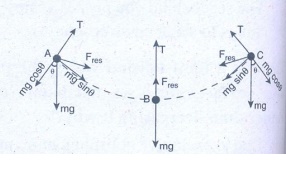 6. Two masses m1 and m2 are connected with a string passing over a frictionless pulley fixed at the corner of the table as shown in the figure. The coefficient of static friction of mass m1 with the table is μs. Calculate the minimum mass m3 that may be placed on m1to prevent it from sliding. Check if m1=15 kg, m2=10 kg, m3=25 and μs =0.2 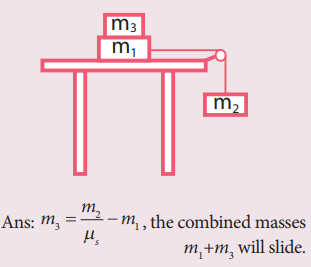 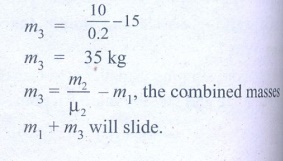 7. Calculate the acceleration of the bicycle of mass 25 kg as shown in Figures 1 and 2. 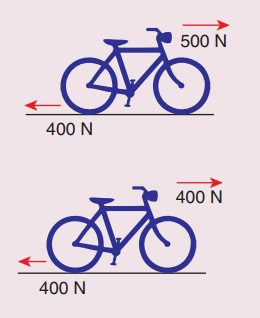 8. Apply Lami’s theorem on sling shot and calculate the tension in each string ? 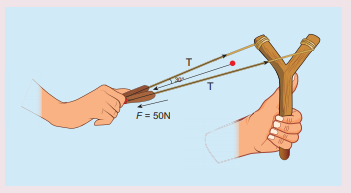 9. A football player kicks a 0.8 kg ball and imparts it a velocity 12 ms-1. The contact between the foot and ball is only for one- sixtieth of a second. Find the average kicking force.

10. A stone of mass 2 kg is attached to a string of length 1 meter. The string can withstand maximum tension 200 N. What is the maximum speed that stone can have during the whirling motion? 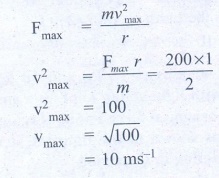 11. Imagine that the gravitational force between Earth and Moon is provided by an invisible between the Moon and Earth. What is the tension that exists in this invisible string due to Earth’s centripetal force? 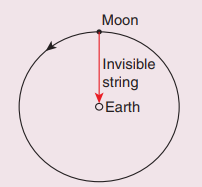 (i) The centripetal acceleration is given by a = v2/r. This expression explicitly depends on Moon’s speed which is non-trivial. We can work with the formula

(ii) am is centripetal acceleration of the Moon due to Earth’s gravity,

(iii) Rm is the distance between Earth and the Moon, which is 60 times the radius of the Earth

The centripetal acceleration of Moon towards the Earth is 0.00272 ms-2.

12. Two bodies of masses 15 kg and 10 kg are connected with light string kept on a smooth surface. A horizontal force F=500 N is applied to a 15 kg as shown in the figure. Calculate the tension acting in the string 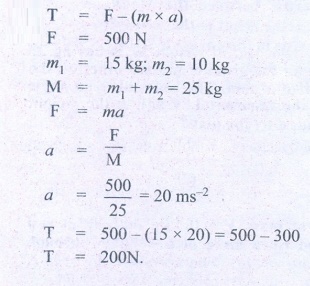 13. People often say “For every action there is an equivalent opposite reaction”. Here they meant ‘action of a human’. Is it correct to apply Newton’s third law to human actions? What is mean by ‘action’ in Newton third law? Give your arguments based on Newton’s laws.

14. A car takes a turn with velocity 50 m s-1 on the circular road of radius of curvature 10 m. calculate the centrifugal force experienced by a person of mass 60kg inside the car?

15. A long stick rests on the surface. A person standing 10 m away from the stick. With what minimum speed an object of mass 0.5 kg should he thrown so that it hits the stick. (Assume the coefficient of kinetic friction is 0.7). 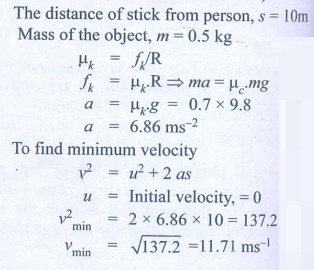 1. Why it is not possible to push a car from inside?

(i) When you push a car from inside, the reaction force of your pushing is balanced out by your body moving backward.

(ii) The seat behind you pushes against to bring things to static equilibrium.

2. There is a limit beyond which the polishing of a surface increases frictional resistance rather than decreasing it why?

(i) Due to excessive polishing, more molecules of the two surfaces come closer. Thus they form more bonds and offer great resistances.

(ii) Because friction arises due to molecular adhesion i.e. due to electrostatic forces.

3. Can a single isolated force exist in nature? Explain your answer.

No, a single isolated force cannot exist in nature because it violates the Newton's third law.

4. Why does a parachute descend slowly?

A parachute is a device used to slow down on object that is falling towards the ground. When the parachute opens, the air resistance increases. So the person can land safely.

5. When walking on ice one should take short steps. Why?

6. When a person walks on a surface, the frictional force exerted by the surface on the person is opposite to the direction of motion. True or false?

False. The frictional force exerted by the surface is not opposite to the direction of motion.

7. Can the coefficient of friction be more than one?

9. The momentum of a system of particles is always conserved. True or false?

True. The momentum of a system of particles is always conserved.