The invention of the wheel plays a crucial role in human civilization.

The invention of the wheel plays a crucial role in human civilization. One of the important applications is suitcases with rolling on coasters. Rolling wheels makes it easier than carrying luggage. When an object moves on a surface, essentially it is sliding on it. But wheels move on the surface through rolling motion. In rolling motion when a wheel moves on a surface, the point of contact with surface is always at rest. Since the point of contact is at rest, there is no relative motion between the wheel and surface. Hence the frictional force is very less. At the same time if an object moves without a wheel, there is a relative motion between the object and the surface. As a result frictional force is larger. This makes it difficult to move the object. The Figure 3.32 shows the difference between rolling and kinetic friction. 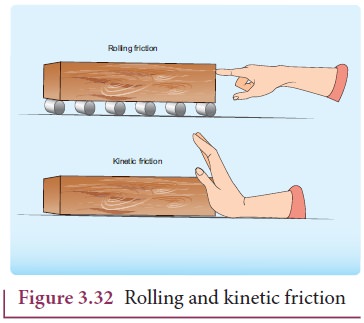 Ideally in pure rolling, motion of the point of contact with the surface should be at rest, but in practice it is not so. Due to the elastic nature of the surface at the point of contact there will be some deformation on the object at this point on the wheel or surface as shown in Figure 3.33. Due to this deformation, there will be minimal friction between wheel and surface. It is called ‘rolling friction’. In fact, ‘rolling friction’ is much smaller than kinetic friction. 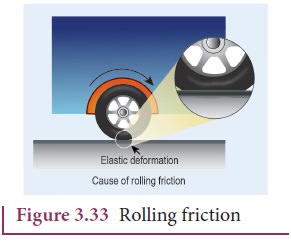