This law states that

. In most cases, the mass of the object remains constant during the motion. In such cases, the above equation gets modified into a simpler form

The above equation conveys the fact that if there is an acceleration a on the body, then there must be a force acting on it. This implies that if there is a change in velocity, then there must be a force acting on the body. The force and acceleration are always in the same direction. Newton’s second law was a paradigm shift from Aristotle’s idea of motion. According to Newton, the force need not cause the motion but only a change in motion. It is to be noted that Newton’s second law is valid only in inertial frames. In non-inertial frames Newton’s second law cannot be used in this form. It requires some modification.

In the SI system of units, the unit of force is measured in newtons and it is denoted by symbol ‘N’.

One Newton is defined as the force which acts on 1 kg of mass to give an acceleration 1 m s-2 in the direction of the force.

Newton’s second law gives the correct explanation for the experiment on the inclined plane that was discussed in section 3.1. In normal cases, where friction is not negligible, once the object reaches the bottom of the inclined plane (Figure 3.1), it travels some distance and stops. Note that it stops because there is a frictional force acting in the direction opposite to its velocity. It is this frictional force that reduces the velocity of the object to zero and brings it to rest. As per Aristotle’s idea, as soon as the body reaches the bottom of the plane, it can travel only a small distance and stops because there is no force acting on the object. Essentially, he did not consider the frictional force acting on the object. 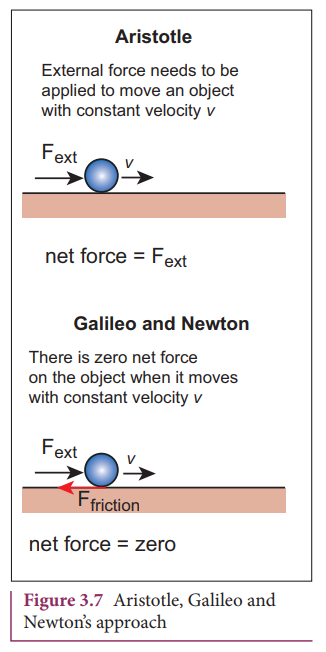