The angle of repose is the angle of inclined plane with the horizontal such that an object placed on it begins to slide.

Consider an inclined plane on which an object is placed, as shown in Figure 3.30. Let the angle which this plane makes with the horizontal be θ . For small angles of θ , the object may not slide down. As θ is increased, for a particular value of θ , the object begins to slide down. This value is called angle of repose. Hence, the angle of repose is the angle of inclined plane with the horizontal such that an object placed on it begins to slide. 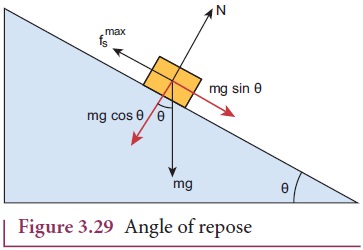 Let us consider the various forces in action here. The gravitational force mg is resolved into components parallel ( mg sinθ) and perpendicular (mg cosθ) to the inclined plane.

The component of force parallel to the inclined plane (mg sinθ) tries to move the object down.

The component of force perpendicular to the inclined plane (mg cosθ) is balanced by the Normal force (N).

When  the  object  just  begins  to move, the static friction attains its maximum value

This friction also satisfies the relation

From the definition of angle of friction, we also know that

in which θ is the angle of friction.

A block of mass m slides down the plane inclined at an angle 60° with an acceleration g/2. Find the coefficient of kinetic friction?

Kinetic friction comes to play as the block is moving on the surface.

The forces acting on the mass are the normal force perpendicular to surface, downward gravitational force and kinetic friction fk along the surface. 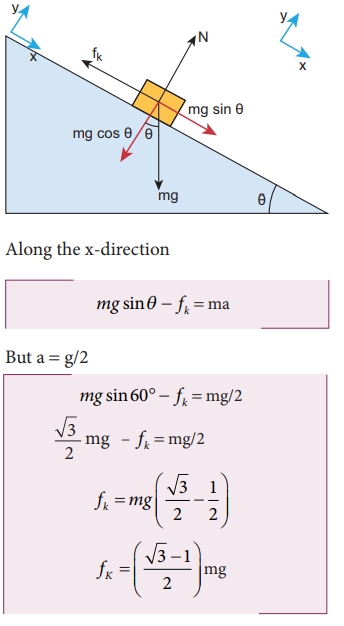 There is no motion along the y-direction as normal force is exactly balanced by the mg cosθ . 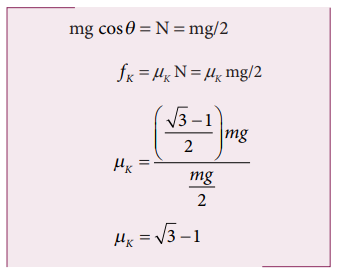