Gases at normal atmospheric pressure are poor conductors of electricity because they do not have free electrons for conduction.

Gases at normal atmospheric pressure are poor conductors of electricity because they do not have free electrons for conduction.

But by special arrangement, one can make a gas to conduct electricity.

A simple and convenient device used to study the conduction of electricity through gases is known as gas discharge tube. The arrangement of discharge tube is shown in Figure 8.2. It consists of a long closed glass tube (of length nearly 50 cm and diameter of 4 cm) inside of which the gas in pure form is filled usually. The small opening in the tube is connected to a high vacuum pump and a low-pressure gauge. This tube is fitted with two metallic plates known as electrodes which are connected to secondary of an induction coil. The electrode connected to positive of secondary is known as anode and the electrode to the negative of the secondary is cathode. The potential of secondary is maintained about 50 kV. 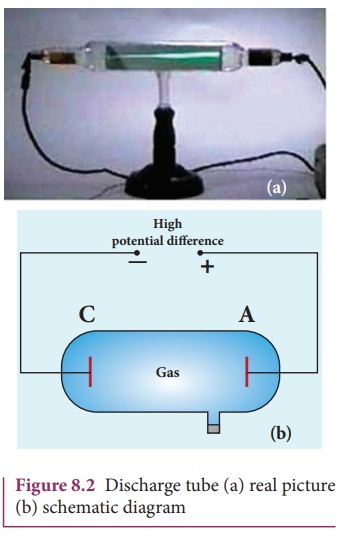 When the pressure reaches to around 0.01 mm of Hg, positive column disappears. At this time, a dark space is formed between anode and cathode which is often called Crookeâ€™s dark space and the walls of the tube appear with green colour. At this stage, some invisible rays emanate from cathode called cathode rays, which are later found be a beam of electrons.

(1) Cathode rays possess energy and momentum and travel in a straight line with high speed of the order of 107m s-1. It can be deflected by application of electric and magnetic fields. The direction of deflection indicates that they are negatively charged particles.

(2) When the cathode rays are allowed to fall on matter, they produce heat. They affect the photographic plates and also produce fluorescence when they fall on certain crystals and minerals.

(3) When the cathode rays fall on a material of high atomic weight, x-rays are produced.

(4) Cathode rays ionize the gas through which they pass.