The average binding energy per nucleon is the energy required to separate single nucleon from the particular nucleus.

is plotted against A of all known nuclei. It gives a curve as seen in Figure 8.24. 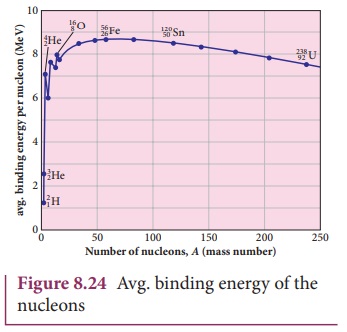 Important inferences from of the average binding energy curve:

rises as the mass number increases until it reaches a maximum value of 8.8 MeV for A = 56 (iron) and then it slowly decreases.

(2) The average binding energy per nucleon is about 8.5 MeV for nuclei having mass number between A= 40 and 120. These elements are comparatively more stable and not radioactive.

(3) For higher mass numbers, the curve reduces slowly and

for uranium is about 7.6 MeV. They are unstable and radioactive.

From Figure 8.24, if two light nuclei with A<28 combine with a nucleus with A<56, the binding energy per nucleon is more for final nucleus than initial nuclei. Thus, if the lighter elements combine to produce a nucleus of medium value A, a large amount of energy will be released. This is the basis of nuclear fusion and is the principle of the hydrogen bomb.

(4) If a nucleus of heavy element is split (fission) into two or more nuclei of medium value A, the energy released would again be large. The atom bomb is based on this principle and huge energy of atom bombs comes from this fission when it is uncontrolled. Fission is explained in the section 8.7.

Compute the binding energy per nucleon of 42He nucleus.

From example 8.9, we found that the