Application of Newton’s Laws: Particle Moving in an Inclined Plane

When an object of mass m slides on a frictionless surface inclined at an angle θ .

Particle Moving in an Inclined Plane

When an object of mass m slides on a frictionless surface inclined at an angle θ as shown in the Figure 3.12, the forces acting on it decides the

The force acting on the object is 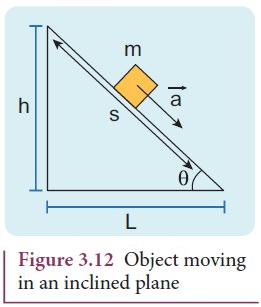 Note that the angle made by the gravitational force (mg) with the perpendicular to the surface is equal to the angle of inclination θ as shown in Figure 3.13 (c).

There is no motion(acceleration) along the y axis. Applying Newton’s second law in the y direction

By comparing the components on both sides, N − mg cosθ = 0

The magnitude of normal force (N) exerted by the surface is equivalent to mg cosθ . 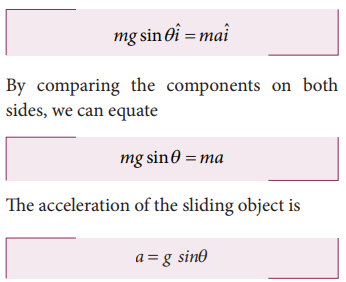 Note that the acceleration depends on the angle of inclination θ . If the angle θ is 90 degree, the block will move vertically with acceleration a = g.

Newton’s kinematic equation is used to find the speed of the object when it reaches the bottom. The acceleration is constant throughout the motion.

The acceleration a is equal to mg sinθ. The initial speed (u) is equal to zero as it starts from rest. Here s is the length of the inclined surface. 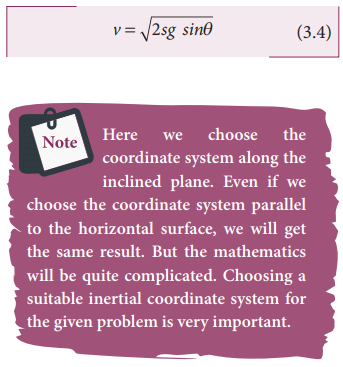