When objects are connected by strings and a force F is applied either vertically or horizontally or along an inclined plane.

When objects are connected by strings and a force F is applied either vertically or horizontally or along an inclined plane, it produces a tension T in the string, which affects the acceleration to an extent. Let us discuss various cases for the same.

Consider two blocks of masses m1 and m2 (m1> m2) connected by a light and inextensible string that passes over a pulley as shown in Figure 3.15. 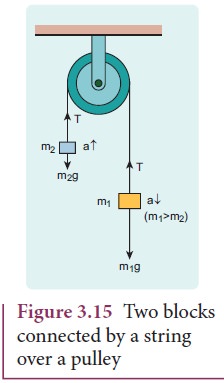 Let the tension in the string be T and acceleration a. When the system is released, both the blocks start moving, m2 vertically upward and m1 downward with same acceleration a. The gravitational force m1g on mass m1 is used in lifting the mass m2.

The upward direction is chosen as y direction. The free body diagrams of both masses are shown in Figure 3.16. 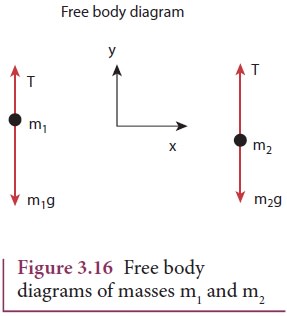 The left hand side of the above equation is the total force that acts on m2 and the right hand side is the product of mass and acceleration of m2 in y direction.

By comparing the components on both sides, we get 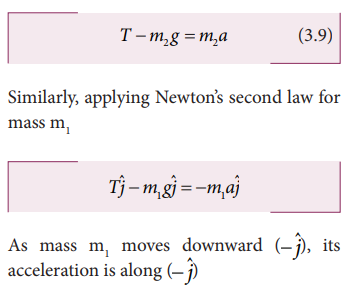 By comparing the components on both sides, we get 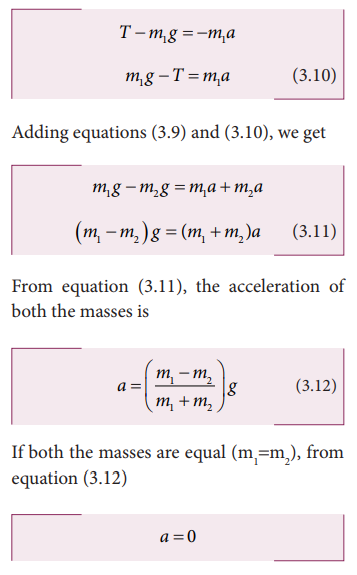 This shows that if the masses are equal, there is no acceleration and the system as a whole will be at rest. 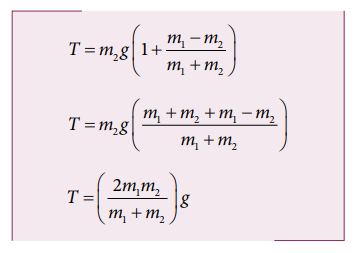 Equation (3.12) gives only magnitude of acceleration. 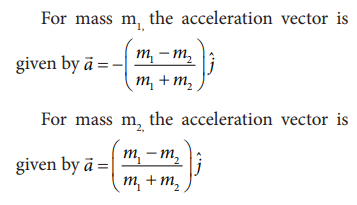 In this case, mass m2 is kept on a horizontal table and mass m1 is hanging through a small pulley as shown in Figure 3.17. Assume that there is no friction on the surface. 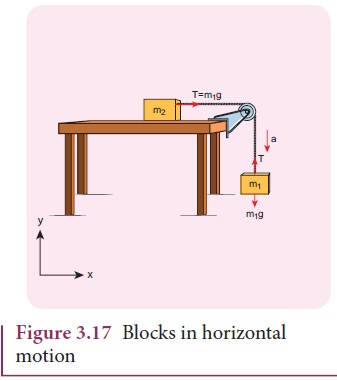 The forces acting on mass m2 are

The forces acting on mass m1 are

The free body diagrams for both the masses is shown in Figure 3.18. 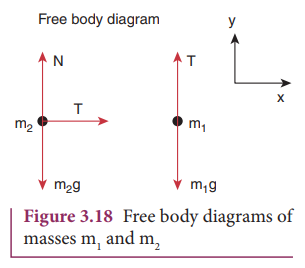 By comparing the components on both sides of above equation,

By comparing the components on both sides of above equation, 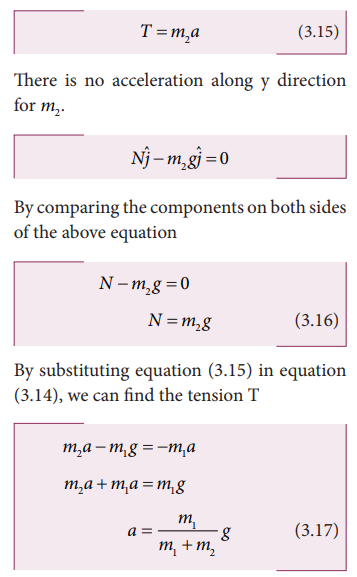 Tension in the string can be obtained by substituting equation  (3.17) in equation (3.15)

Comparing motion in both cases, it is clear that the tension in the string for horizontal motion is half of the tension for vertical motion for same set of masses and strings.

This result has an important application in industries. The ropes used in conveyor belts (horizontal motion) work for longer duration than those of cranes and lifts (vertical motion).