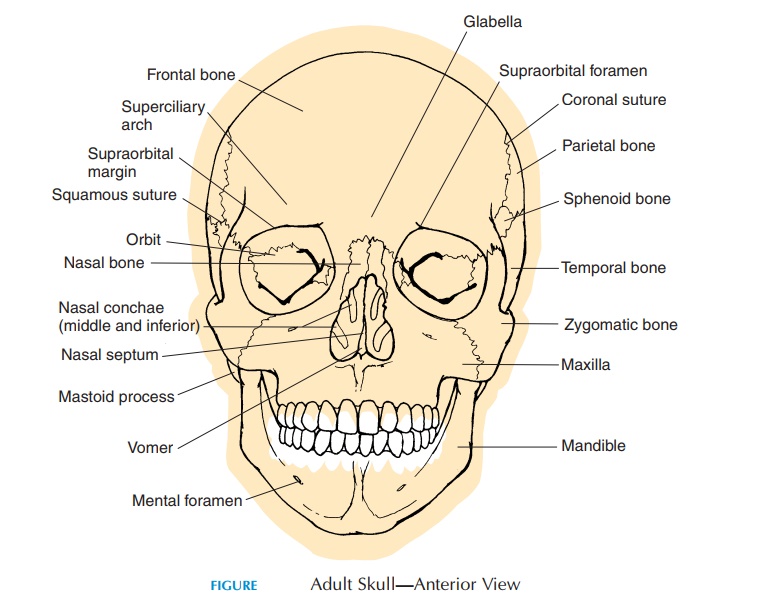 The bones of the skull (see Figures 3.7–3.15) protect the brain and guard the entrances to the digestive and respiratory systems.

The bones of the skull (see Figures 3.7–3.15) protect the brain and guard the entrances to the digestive and respiratory systems. The bones that cover the brain form thecranium while the others are associ-ated with the face (facial bones). The tiny ossicles of the middle ear and the hyoid bone, attached to the lower jaw by ligaments, are also part of the skull. 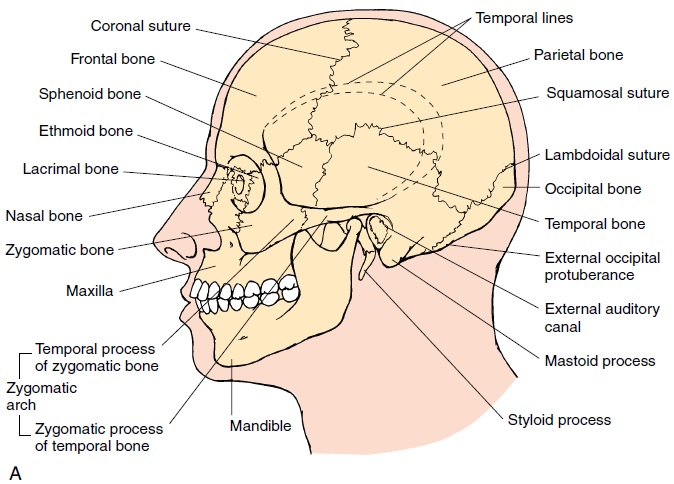 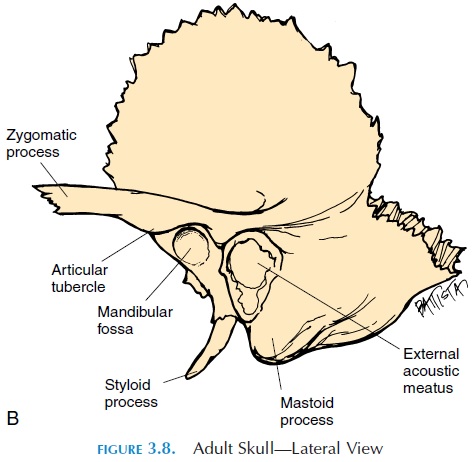 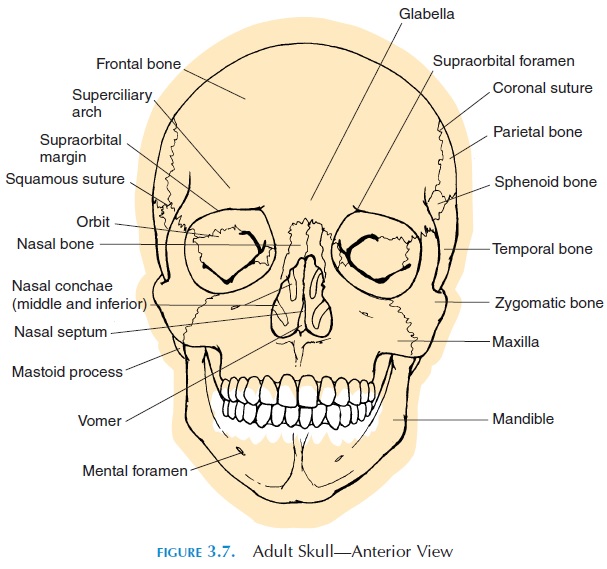 The cranium consists of the frontal (1), parietal (2), occipital (1), temporal (2), sphenoid (1), and eth-moid (1) bones. These bones form the cranial cavity, which contains the brain, blood vessels, and nerves cushioned by fluid. The suture is a joint where two or more of these bones meet. The suture between the parietal bones is thesagittal suture; the suture be-tween the two parietal and occipital bone is the lambdoidal suture. The squamosal suture joins theparietal to the temporal bone. The frontal bone and

the parietal bones are joined at the coronal suture. The outer surface of the cranium provides surface area for attachment of the muscles of the face. The inner surface provides attachment for the meninges, the thick, connective tissue membranes that sur-round the brain. The cranial bones also protect the special sensory organs, the eye, hearing, equilibrium, taste, and smell. Many depressions and grooves can be seen on the inside surface of the cranial cavity. These grooves are for venous sinus and for meningeal arteries. The joint between the first vertebra and the occipital bone allows head movement.

The important landmarks of the skull are shown in Figures 3.7–3.15. 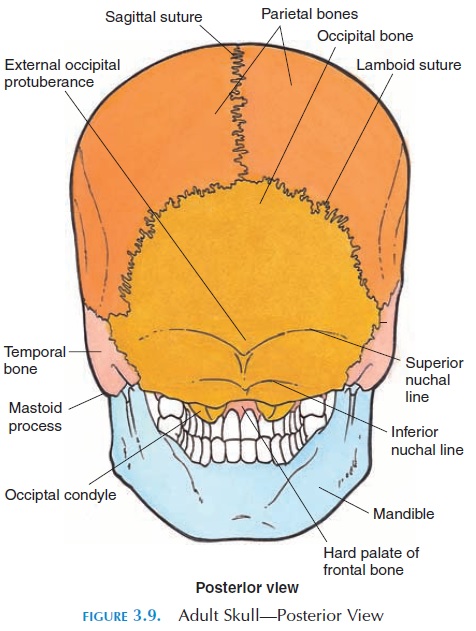 The facial bones (14) mainly protect the opening of the digestive and respiratory systems. The superficial bones are the lacrimal (2), nasal (2), maxilla (2), zy-gomatic(2), palatine (2), inferior nasal conchae (2), vomer (1), and mandible (1). The muscles that controlthe facial expressions and those that help manipulate the food in the mouth are attached to these bones.

Some bones of the skull contain air-filled chambers called sinus. The sinus make the bone much lighter than it would be otherwise. They also contribute to the resonance of the voice.

The sinus are lined by a vascular membrane that produces mucus, which helps to warm and moisten the air that is breathed before it reaches the lungs. All the sinus are adjacent to the nose and communicate with the nasal cavity, hence, the name. The frontal, temporal, sphenoid, and ethmoid bones of the cranium and the maxillary bone of the face contain sinus.

The orbits are two, pyramid-shaped depressions con-taining the eyeballs. The orbits are formed by seven bones. The nerves and blood vessels that supply the eyeballs and muscles that move the eyes enter and leave through openings located in the orbit.

The surface markings of individual bones must be studied using the diagrams, as well as the informa-tion given, as only some of them are highlighted here.

The occipital bone covers the back of the head. When you run your hand over the back of the head, you can feel a bump—the external occipital protu-berance. Three ridges run horizontally, close to thiscrest. These are the inferior, superior, and supreme or highest nuchal lines. Some muscles and liga-ments of the neck are attached to these lines. A large opening is seen in the inferior surface of the occipital bone, the foramen magnum. It connects the cranial cavity with the spinal cavity formed by the vertebral column. Two rounded protuberances on either side of the foramen (occipital condyles) articulate with the first cervical vertebra (atlanto-occipital joint). Many openings are present in the bones of the skull, which are passages for blood vessels and nerves entering and leaving the cranial cavity. The details of these openings are beyond the scope of this book.

On the parietal bone, horizontal ridges (tempo-ral lines [superior and inferior temporal lines]) canbe felt superior to the ears. The temporalis muscle at-taches to this ridge. This is the muscle that can be felt above the ear, on the side of your face. The contrac-tion of this muscle can be felt if the lower jaw is moved.

The eustachian tube, or pharyngotympanictube, is part of the temporal bone. This tube, filledwith air, connects the pharynx and the middle ear. By opening and closing the tube, the air pressure be-tween the external ear canal and middle ear canal are equalized. This is important for producing oscilla-tions of the auditory ossicles in the middle ear and normal hearing. 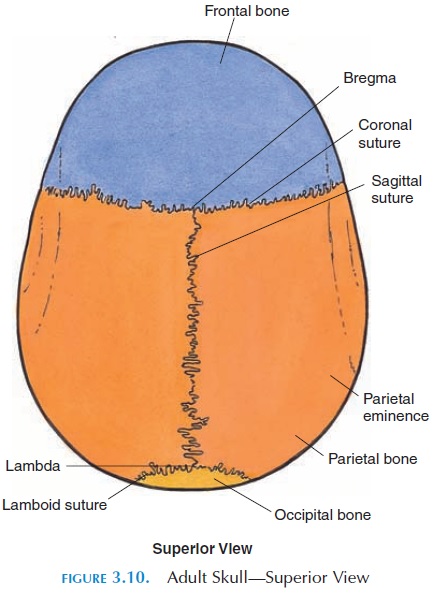 The sphenoid bone is butterfly-shaped, with two wings (greater and lesser), and serves as a bridge be-tween the cranium and the facial bones. Important structures of the brain are closely related to this bone. Superiorly, the center of this bone has a hy-pophyseal fossa depression. The bony enclosurethat forms this fossa is called the sella turcica, so called as it resembles the Turkish saddle. The hy-pophyseal fossa houses the pituitary gland (a major endocrine gland). Close to the hypophyseal fossa an-teriorly is the opening for the optic nerve—the opticforamen. The sphenoid sinus are located in themiddle of the sphenoid bone. Between the two wings is the superior orbital fissure, through which blood vessels and nerves pass in and out of the cranial cav-ity into the orbit. On the inferior surface of the skull (Figure 3.11), two processes (medial and lateralplate of pterygoid) protrude from the sphenoidbone. Certain muscles that move the mandible are at-tached to these processes. 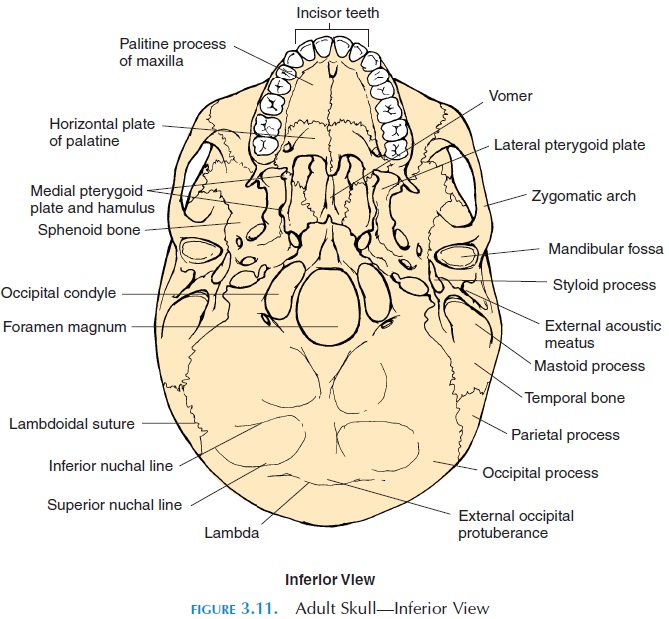 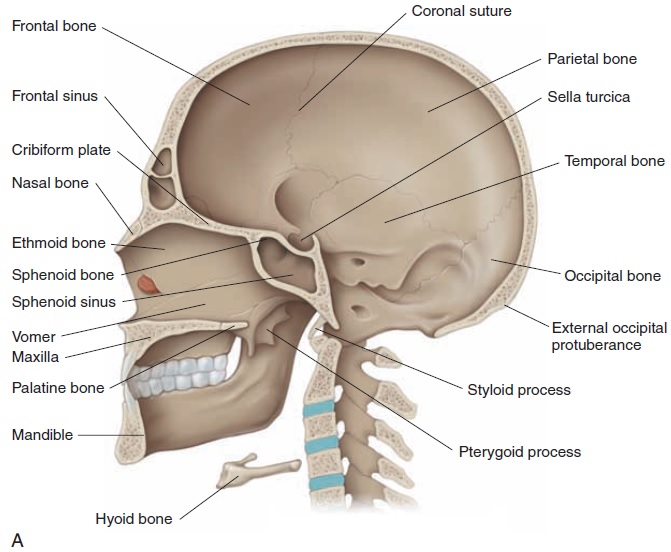 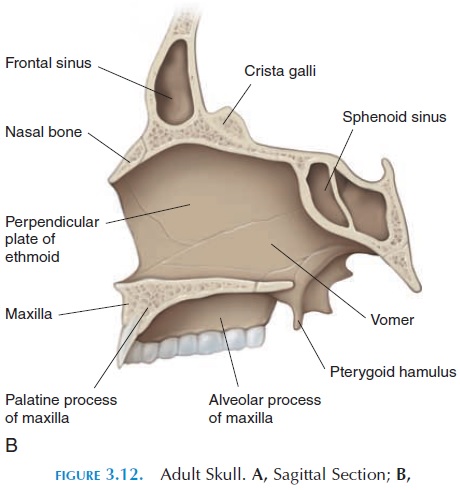 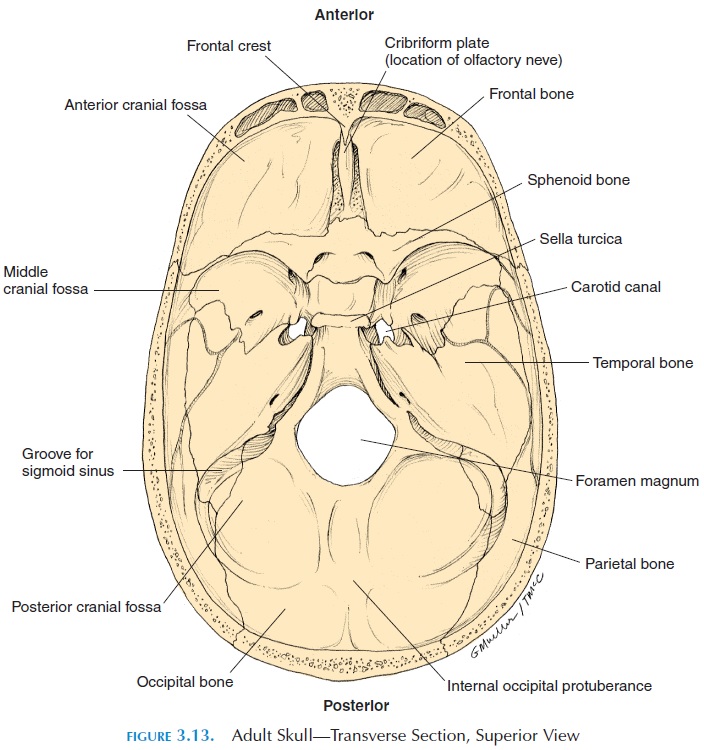 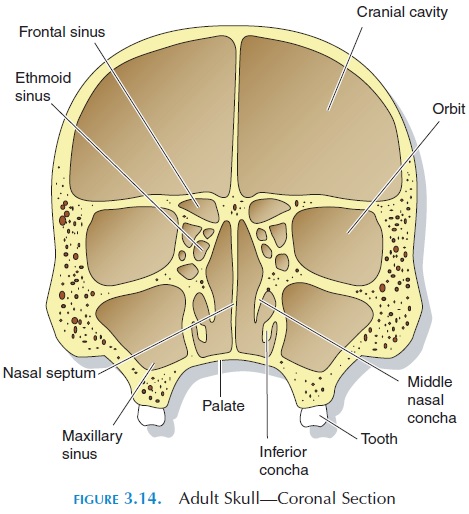 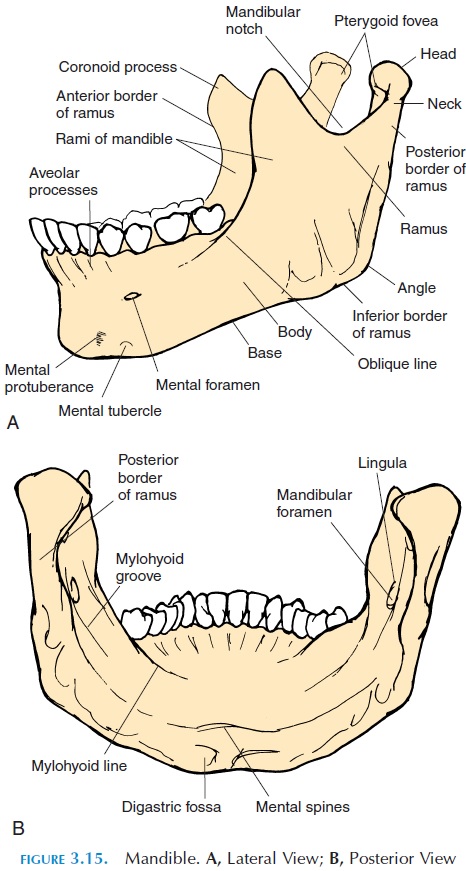