The Ankle Joint and Joints of the Foot

The ankle joint (see Figure 3.48) is formed by the dis-tal end of the tibia, fibula, and the superior surface of the talus.

THE ANKLE JOINT AND JOINTS OF THE FOOT

The ankle joint (see Figure 3.48) is formed by the dis-tal end of the tibia, fibula, and the superior surface of the talus. This joint is also known as the talocrural joint. It is a hinge joint with the lateral and medialaspect of the capsule thickened to form ligaments. 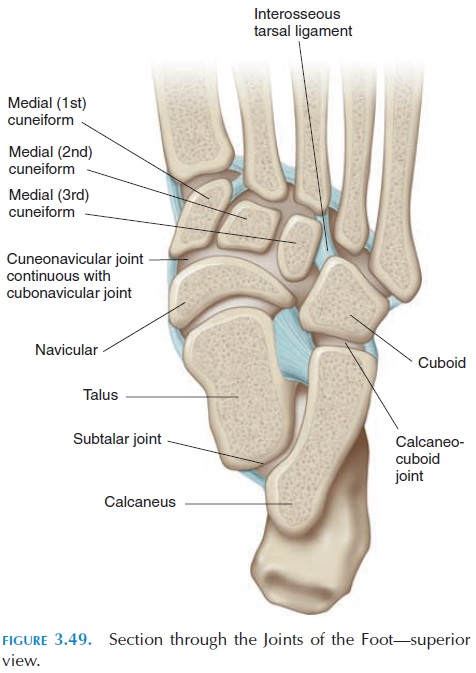 Muscles that cause plantar flexion:

Flexors of the toes

Muscles that cause dorsiflexion:

Extensors of the toes

Muscle that inverts the foot:

Muscle that everts the foot:

The external appearance of the shoe and foot should provide information. The alignment of the toes and the shape of the foot and arches should be inspected. The color of the skin and presence of swelling should also be noted.

The bones of the foot and ankle are easily palpated. Some bony prominences that can be located are the malleoli, talus, calcaneus, and the metatarsal and phalanges. The deltoid ligament is also palpable infe-rior to the medial malleolus. The long saphenous vein, if dilated may be visible just anterior to the me-dial malleolus. Both active and passive range of mo-tion should be tested at the various joints.