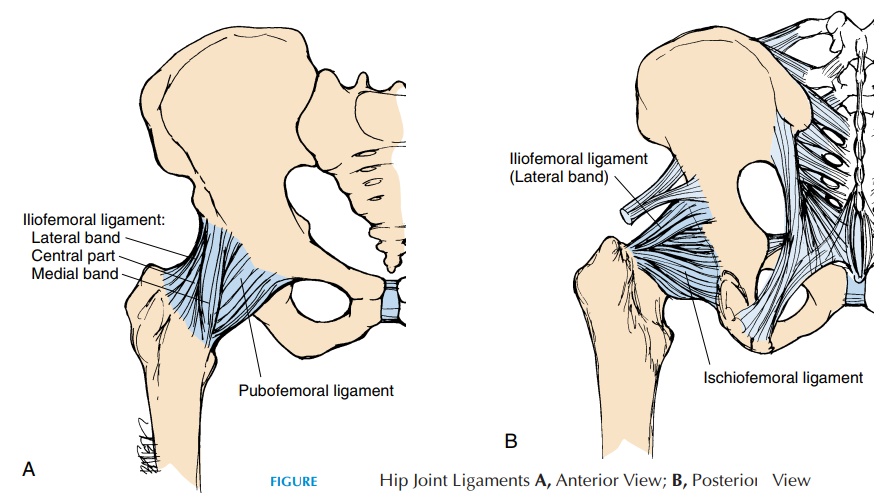 The hip joint, also referred to as the acetabulofemoral or iliofemoral joint, is one of the most stable joints be-cause the articular surfaces of the rounded head of the femur and the acetabulum of the pelvis fit well into each other. The acetabulum is further deepened by the fibrocartilage (acetabular labrum) located in the ac-etabulum. In addition to shape of the articular surface, the hip joint, similar to the shoulder, has supporting ligaments (see Figure 3.45).

The thick capsule is reinforced by strong ligaments. The iliofemoral ligament is a thick band that runs between the anterior inferior iliac spine and the in-tertrochanteric line of the femur. This ligament pre-vents excessive internal and external rotation. When standing, this ligament is twisted and pulled taut and results in “locking” of the joint, allowing the person to stand with little muscle action. The pubofemoralligament extends from the pubic portion of the ac-etabular rim to the inferior portion of the neck of the femur. The ischiofemoral ligament runs between the ischial acetabular rim and the superior portion of the femoral neck.

Muscles that flex the hip:

Muscles that extend the hip:

Muscles that abduct the hip:

Muscles that adduct the hip:

The gait should be observed as the person enters the room. It is preferable to have the patient’s body ex-posed waist down. When standing normally, the an-terior superior iliac spine should be level with a slight anterior curvature of the lumbar spine. Absence of the lumbar lordosis may indicate spasm of the mus-cles. Weakness of the abdominal muscles may exhibit an abnormally increased lordosis. Look for muscle wasting and body asymmetry.

Other structures: The inguinal ligament, which runs between the anterior superior iliac spine and the pubic tubercle, marks part of the route taken by the male testis as it descends into the scrotum. Bulges in this region may indicate an inguinal hernia. The femoral artery pulsation can be felt just inferior to the inguinal ligament. The femoral vein lies just me-dial to the artery. Tenderness over the sciatic nerve as it emerges from the sacral region can be palpated.

The active and passive range of motion of the hip should be tested as well, together with discrepancies between the two legs.