Joints of the Pectoral Girdle and Upper Limb

The bones involved in the function of the shoulder girdle include the upper thoracic vertebrae, the first and second ribs, manubrium of the sternum, the scapula, the clavicle, and the humerus.

Joints of the Pectoral Girdle and Upper Limb

The movement of the shoulder is facilitated by three joints:

3.        the shoulder, glenohumeral or scapulohumeral joint and the contact between the scapula and the thoracic cage (this is not a joint)

It is formed by the sternal end of the clavicle and the upper lateral part of the manubrium and the superior surface of the medial aspect of the cartilage of the first rib. It is a gliding joint, which has a fairly wide range of movement because of the presence of an articular disk within the capsule. The articular disk helps prevent medial dislocation of the clavicle. It is more common for the clavicle to break or the acromioclavicular joint to dislocate even before a medial dislocation at this joint could occur. 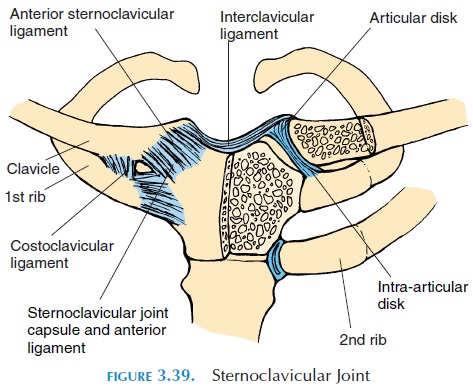 Movements, Range of Motion, and Muscles

A wide range of gliding movements is possible. The movements are initiated in conjunction with the shoul-der movement. The muscles that move the shoulder also move this joint.

This joint is formed by the lateral end of the clavicle and the acromion of the scapula. It is a planar joint.

Movements, Range of Motion, and Muscles

This joint is formed by the head of the humerus and the glenoid fossa of the scapula. It is a ball-and-socket joint and the most freely movable joint in the body. The shallow glenoid fossa is deepened by the presence of a circular band of fibrocartilage, the glenoidlabrum. The head of the humerus is prevented tosome extent from upward displacement by the pres-ence of the acromion and coracoid processes of the scapula and the lateral end of the clavicle. A number of ligaments (Figure 3.40A) help stabilize this joint further. 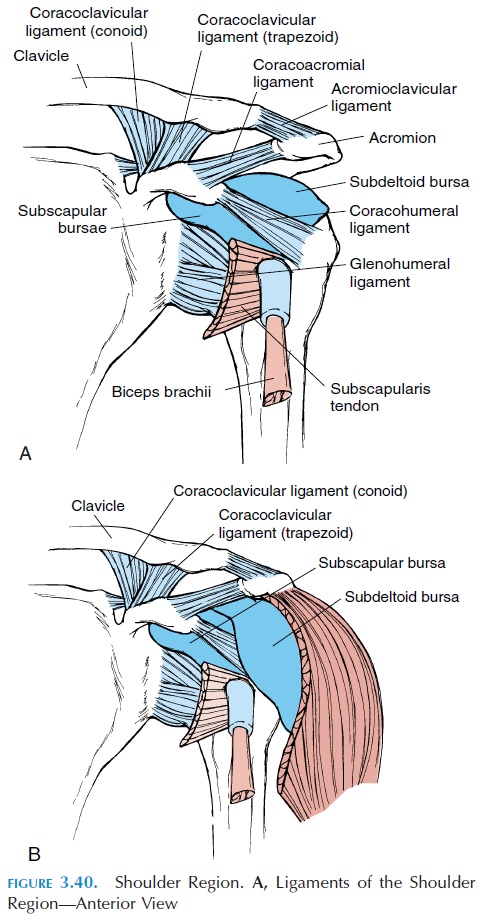 The glenohumeral ligament consists of three thick-ened sets of fibers on the anterior side of the capsule and extends from the humerus to the margin of the glenoid cavity. It prevents excess lateral rotation and stabilizes the joint anteriorly and inferiorly.

The coracohumeral ligament extends from the coracoid process to the neck of the humerus and strengthens the superior part of the capsule.

The coracoacromial ligament extends from the coracoid process to the acromion process.

The coracoclavicular and acromioclavicular lig-aments extend to the clavicle from the coracoidprocess and acromion, respectively.

The transverse humeral ligament extends across the lesser and greater tubercle, holding the tendon of the long head of the biceps in place.

Two major and two minor bursae (Fig. 3.40B) are as-sociated with the shoulder joint. The subdeltoidbursa is located between the deltoid muscle and thejoint capsule. Thesubacromial bursa and the sub-coracoid bursa, as the names suggest, are locatedbetween the joint capsule and the acromion and coracoid processes, respectively. A small subscapu-lar bursa is located between the tendon of the sub-scapularis muscle and the capsule.

Flexion, extension, adduction, abduction, circum-duction, and medial and lateral rotation are all possi-ble in this joint, and many muscles located around the joint help with movement. In addition, the shoul-ders can be elevated, depressed, retracted (scapula pulled together), and protracted (scapula pushed apart as in reaching forward with both arms).

As the humerus elevates to 120°, the tension devel-oped in the joint capsule laterally rotates the humerus and prevents the greater tubercle from im-pinging on the acromion. At this point, the subdeltoid bursal tissue is gathered below the acromion. (If the bursa is swollen, it can result in restricted movement and/or injury to the tissue). Abduction beyond 160° occurs as a result of movement (extension) at the lower cervical and upper thoracic vertebrae. In uni-lateral abduction, the spine also rotates in the oppo-site direction of the moving arm.

Many muscles participate in shoulder movement. Of these, the tendons of four muscles provide stability to the joint and are known as the rotator, or musculo-tendinous, cuff. The four muscles involved are thesupraspinatus, infraspinatus, teres minor, and sub-scapularis (you can remember it by the acronym SITS). The tendons of these muscles blend with the joint capsule. When the arm is hanging at the side, the tension of the superior aspect of the joint capsule is sufficient to keep the two articulating surfaces in contact. When the arm is moved from the side, the rotator cuff muscles must contract to keep the head of the humerus in position.

Muscles that help with flexion:

Muscles that help with extension:

The muscles that help with abduction:

Deltoid (anterior and posterior portions) The muscles that help with adduction:

Muscles that help with internal rotation:

Muscles that help with external rotation:

Muscles that help elevate the shoulder:

Muscles that help with scapular retraction (as in the position of attention or bracing the shoulder):

Muscles that help with scapular protraction:

It must be remembered that pain in the shoulder and arm could be referred pain from the myocardium, neck, and diaphragm.

After inspecting the skin and area around the joint for abnormal swelling, wasting of muscles, or discol-oration of the skin, the bony prominences and the muscles should be palpated for tender points. Then the range of motion should be tested both actively and passively.

If a person is unable to move his shoulder joint ac-tively through the normal range of motion, it could be a result of muscle weakness, tightening of the fi-brous tissue of the capsule or ligaments, or abnormal bony growths. Limitations as a result of muscle weakness can be ruled out if full range of movement is achieved by moving the joint passively. If the limi-tation persists even when moving the joint passively, the problem is probably a result of ligaments, cap-sule, or bony growths.

The elbow joint (see Figure 3.41) is a hinge joint with three components. The humeroulnar joint is where the trochlea of the humerus articulates with the trochlear notch of the ulna. The humeroradial joint is formed by the capitulum of the humerus and the head of the radius, and the proximal radioulnarjoint is the articulation between the head of the ra-dius and the radial notch of the ulna. The latter is not part of the hinge but is a pivot joint. The capsule and joint cavity are continuous for all three joints. The el-bow joint is relatively stable because it is well sup-ported by bone and ligaments. 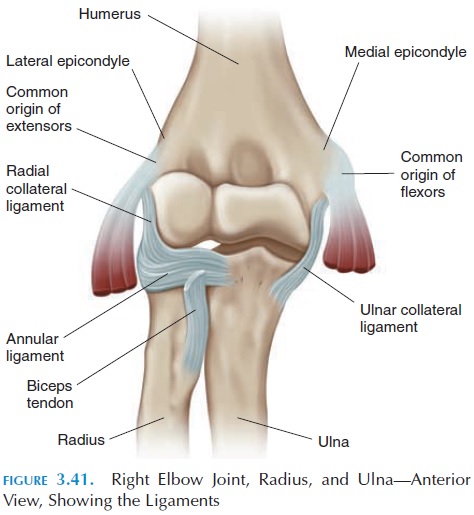 Two major ligaments—the ulnar (medial) collateral ligament and the radial (lateral) collateral liga-ment— support the joint on either side and rise from the medial and lateral epicondyle of the humerus, re-spectively. The head of the radius is held in the radial notch of the ulna by the annular ligament.

An olecranon bursa is located posteriorly over the olecranon process.

The elbow joint allows flexion and extension. Fore-arm supination and pronation are also possible and a result of the articulation between the radius and ulna proximally and distally.

Muscles that flex the elbow:

Muscles that help with extension:

Muscles that help with supination:

Muscles that help with pronation:

Note the angle made by the forearm with the upper arm—the carrying angle. Normally, it is about 5° in men and 10–15° in women. Swelling, scars, and skin discolorations should be recorded.

Medially, the ulnar nerve can be easily located in the sulcus between the medial epicondyle and the olecranon process. If the olecranon bursa is inflamed, it can be felt as a thick and boggy structure over the olecranon. Tenderness over the lateral collateral liga-ment and the annular ligament can be identified.

The shallow depression in front of the forearm is the cubital fossa. The biceps tendon and the pulsa-tion of the brachial artery can be felt here.

In addition, the various muscles, active and pas-sive range of motion should be checked.

JOINTS OF THE WRIST AND HAND 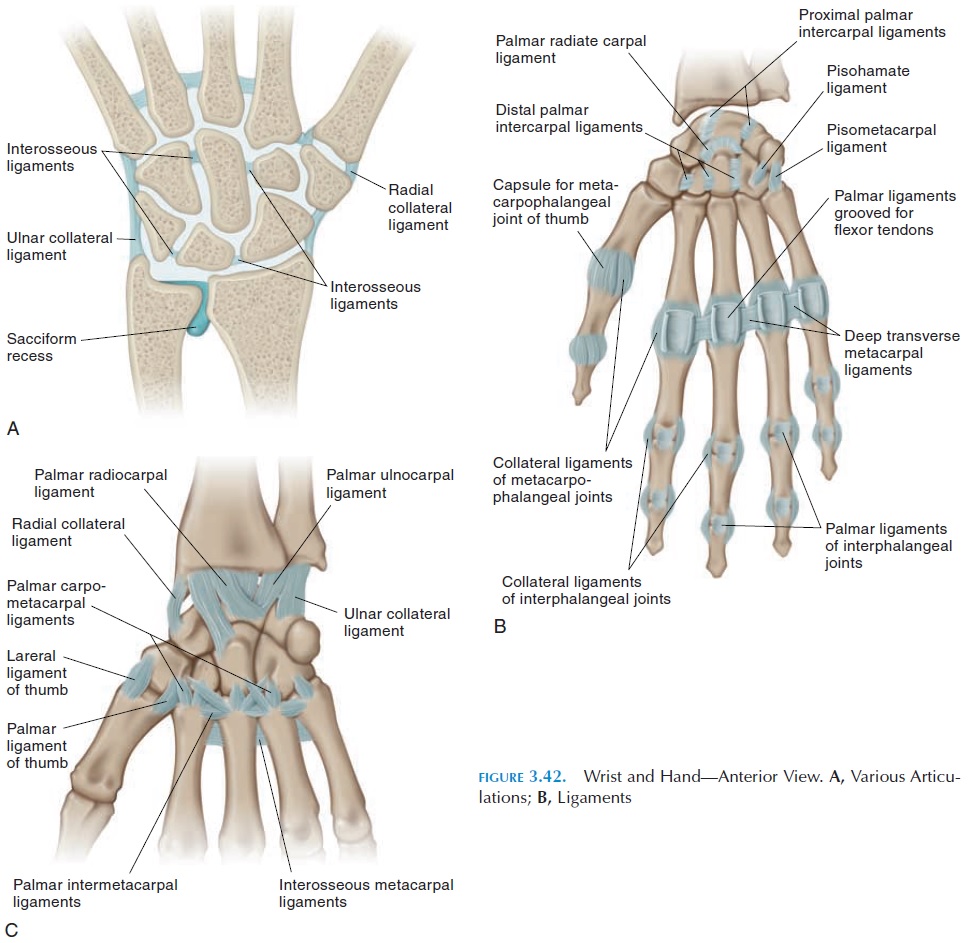 The wrist is a condyloid joint formed by the articula-tion between three carpal bones (scaphoid, lunate, and triquetrum) with the distal end of the radius and an articular disk. The articular disk separates the ulna from the carpals, making the distal radioulnar joint distinct from the radiocarpal joint. 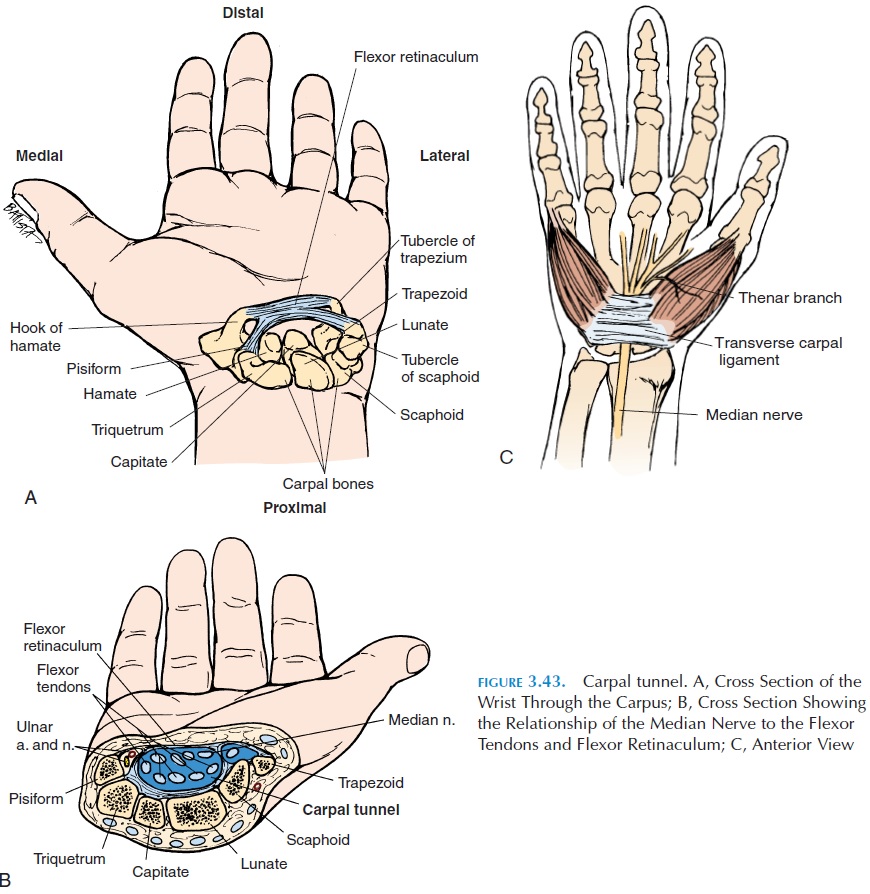 An important ligament in the hand complex is the transverse carpal ligament, or the flexor retinacu-lum. The transverse carpal ligament forms the roofof the palmar arch formed by the carpals (see Figure 3.43). The hook of the hamate and the pisiform form the ulnar side of the arch and the trapezium and the radial side of the scaphoid form the radial side. The tendons of the flexor digitorum superficialis and flexor digitorum profundus, surrounded by a com-mon synovial sheath, pass through the carpal tunnel. The tendon of the flexor carpi radialis, the tendon of flexor pollicis longus, and the median nerve also pass through the tunnel.

The muscles that move the hand pass over the wrist joint and help move it. There are 6 flexors and 2 pronators on the anterior or flexor surface of the forearm and a total of 12 muscles on the extensor surface of the forearm. The abductor pollicis longus and the flexor and extensor carpi radialis longus and brevis help with radial deviation. The flexor and ex-tensor carpi ulnaris help with ulnar deviation.

OTHER JOINTS OF THE HANDS

There are many joints in the region of the hand (Fig-ure 3.42) as there is articulation between the various carpal bones. These are gliding joints.

The joints between the metacarpal bones and the phalanges—the metacarpophalangeal joints—are of the condyloid type, allowing flexion, extension, ab-duction, adduction, and some axial rotation. Flexion and extension is more extensive. Some hyperexten-sion is also possible at these joints. The joints be-tween the phalanges—interphalangeal joints—are of the hinge type, allowing flexion and extension. The joint between the phalanges of the thumb also allow some axial rotation.

Flexion and extension at the various joints are dif-ferent.

Metacarpophalangeal joint of thumb: adduction, 50°; flexion, 90°; extension, 20°; abduction, 70°. It is also possible to oppose the thumb. Minimal axial ro-tation is also possible at this joint.

The dorsal and palmar surfaces should be examined and the way the hand is held should be noted. Nor-mally, the fingers are held parallel to each other in a slightly flexed position. Damage to nerves supplying the hand produces typical deformities .

The various bones can be easily felt through the skin and may be palpated for tender points. Both active and passive range of motion should also be tested.