The knee joint, or tibiofemoral joint, (see Figure 3.46) is one of the largest, most complex, and most frequently injured joints in the body and a thorough knowledge of its anatomy is important. It is a hinge joint. The fibula does not articulate with the femur and comes in con-tact only with the lateral surface of the tibia. 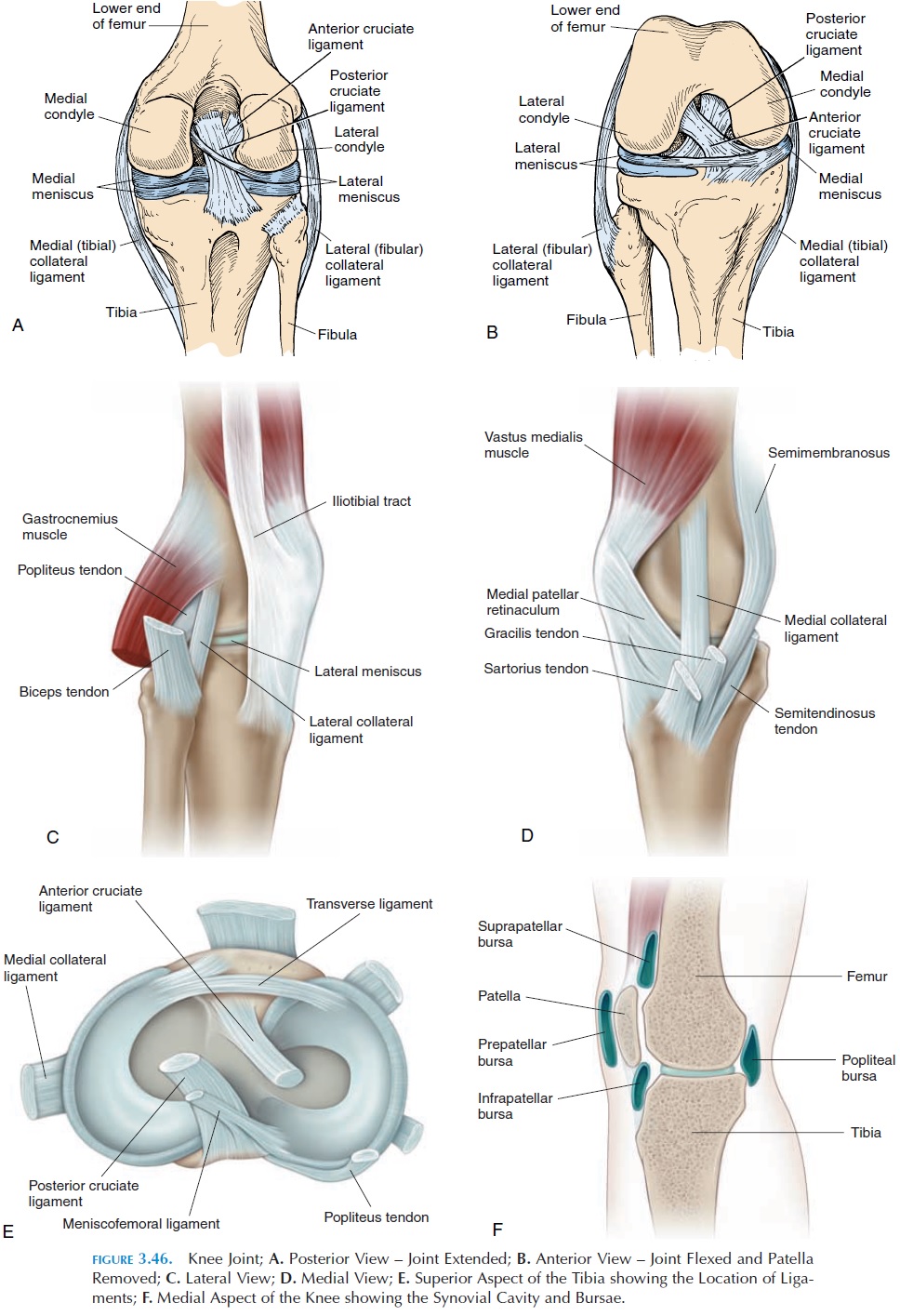 The lower end of the femur, with its condyles and deep fossa between them, articulates with the flat up- per surface of the tibia. Numerous ligaments, carti-lages, and tendons help stabilize this joint. The articu-lating surface is deepened by the presence of two half-moon–shaped fibrocartilage disks—the medial and lateral meniscus—located on the tibia (Figure 3.46E).The menisci also serve as shock absorbers, spreading the stress on the joint over a larger joint surface and helping lubricate the joint and reduce friction.

The knee joint has ligaments located inside and outside the joint capsule. Inside the joint, there are two liga-ments that run anteroposteriorly, preventing excessive forward and backward movement. The anterior cruci-ate ligament runs from the anterior part of the tibia tothe medial side of the lateral femoral condyle. It pre-vents excessive forward movement (hyperextension) of the tibia. The posterior cruciate ligament extends su-periorly and anteriorly from the posterior aspect of the tibia to the lateral side of the medial condyle. It pre-vents the tibia from slipping backward and, with the popliteus muscle, it prevents the femur from sliding anteriorly over the tibia in a squatting position.

The patellar tendon—a thick, fibrous band that extends from the patella to the tibial tuberosity—is actually an extension of the quadriceps tendon that stabilizes the joint anteriorly. Thin fibrous bands— patellar retinaculum—extend from the side of thepatella to the tibial condyles. Posteriorly, the capsule is thickened to form the oblique popliteal ligament, an extension of the semimembranous tendon. An-other thickening—the arcuate popliteal ligament— runs from the posterior fibular head to the capsule.

Another ligament—lateral collateral ligament, or the fibular collateral ligament, runs from the lateral epicondyle of the femur to the head of the fibula, sta-bilizing the joint laterally. Other small ligaments ex-ist. The coronary ligament attaches the menisci to the tibial condyle, the transverse ligament connects the anterior portions of the medial and lateral menisci, and the meniscofemoral ligament runs posteriorly, joining the lateral menisci to the medial condyle of the femur.

In addition to the support provided by the liga-ments, the joint is stabilized medially by the pes anser-inus tendons (semitendinosus, gracilis, and sartorius)and the semimembranosus tendon. The posterolateral region is supported by the biceps femoris tendon, and the posterior aspect is reinforced by the origins of the gastrocnemius muscles and the popliteus muscles.

The knee joint is surrounded by numerous bursae. The largest is the suprapatellar bursa, or quadri-ceps bursa, an extension of the joint capsule that al-lows movement of the thigh muscles over the lower end of the femur. Subcutaneous bursae—the subcu-taneous or superficial prepatellar and infrapatel-lar bursa and the deep infrapatellar bursa—sur-round the patella. A large fat pad, the infrapatellar fat pad, exists deep to the patella tendon. The fat pad is lined on the deep surface by synovial membrane and is thought to help lubricate the joint as it deforms during flexion and extension of the knee.

In addition to the above, bursae exist in the popliteal fossa—popliteal bursa—and near the gas-trocnemius—the gastrocnemius bursa. The semi-membranous bursa,which lies deep to the semi-membranosus tendon and the medial origin of the gastrocnemius muscle, often communicates with the joint. Other bursae may exist between the pes anser-inus and the iliotibial band.

Muscles that flex the knee:

Muscle that extends the knee:

The gait of the individual must be closely watched. Identify abnormal swellings and asymmetry of mus-cles. The knee should be fully extended while standing.

Many parts of the bones can be easily palpated in and around the knee. The medial and lateral femoral condyle, the head of the fibula and the patella, and others may be palpated. The muscles and tendons in and around the joint should be palpated for tender-ness. Enlarged bursae (a common ailment) can be felt as a boggy, soft swelling. Tenderness in the joint margins may be a result of tears in the medial and lateral meniscus. The medial and lateral collateral ligaments are also easily palpated. The insertion of the tendons of the sartorius, gracilis, and semitendi-nosus can be palpated on the medial aspect of the joint. The iliotibial tract, a thick fibrous band, runs on the lateral aspect of the knee joint.

The stability of the joint must be tested by check-ing the collateral and cruciate ligaments. The range of motion should also be tested actively and passively.