In osteopathic medicine, the sacroiliac joint is con-sidered as two joints—the sacroiliac joint (where the sacrum moves in relation to the ilium) and iliosacral joint (where the ilium moves in relation to the sacrum). This is so because the sacrum is associated with the spine and helps transmit forces from above to the pelvis, and the ilium is closely associated with the lower limb and transmits forces upwards.

The two synovial joints between the medial surface of the ilium and the lateral aspect of the upper sacral vertebrae are L-shaped when viewed laterally. The ar-ticular surfaces are covered with cartilage and marked by elevations and depressions that fit each other and make the joint stronger.

The ligaments that bind the sacrum to the ilium withstand the major forces through the sacroiliac joints. They form a network of fibrous bands. Many ligaments—iliolumbar, sacrolumbar, sacroiliac (an-terior and posterior), sacrotuberous (sacrum to is-chial tuberosity), and sacrospinous—are found around the joints (Figure 3.44). Of these, the iliolum-bar, which extends from the transverse process of the 5th vertebrae to the posterior iliac crest, is the most important as it stabilizes the 5th vertebrae on the sacrum. In addition, the muscles adjacent to the joint—gluteus maximus, gluteus minimus, piriformis, latissimus dorsi, quadratus lumborum, and iliacus— have fibrous attachments that blend with the liga-ments and make the joints even stronger. 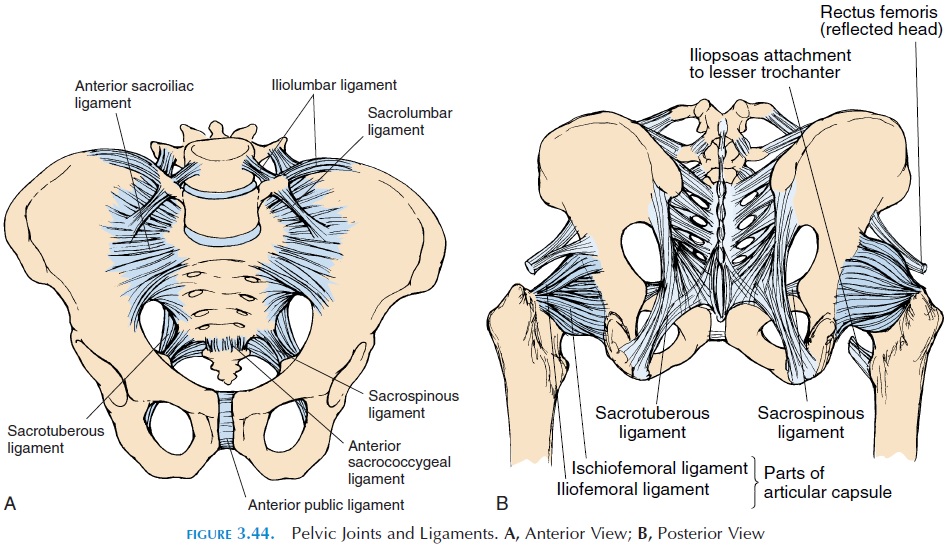 Possible Movements and Range of Motion

The movements of this joint are limited, but even this limited movement is important. The main function of this joint is to serve as a shock absorber. The move-ment of the sacrum is described as flexion (nutation) and extension (counter-nutation). During flexion the sacral promontory moves anteriorly and inferiorly with the apex moving posteriorly, while the iliac bones approximate and the ischial tuberosities move apart. Such a movement occurs when walking and when bending forward (flexion) and backward (exten-sion). During walking, the movement of the sacrum is determined by the forces from above, while the move-ment of the ilium is determined by the femur.

Though this joint is surrounded by strong muscles, none play a direct part in moving the sacrum. Sacral movement is a result of the pull of forces through lig-aments and gravity. By pulling on the ilia, the muscles in the vicinity have an indirect effect on the sacrum.

There are 35 muscles attached to the sacrum or hipbones and, together with the ligaments and fascia, they help coordinate movement of the trunk and lower limbs. Problems associated with any of them can result in alteration of the mechanics of the pelvis. The quadratus lumborum, erector spinae, abdominal muscles, rectus femoris, iliopsoas, tensor fascia latae, piriformis, short hip adductors, hamstrings, gluteus maximus, medius and minimus, vastus medialis and lateralis, the pelvic floor muscles are important mus-cles that must be considered in a client with low back pain.

When assessing this joint, it is important to take a good history that includes history of trauma and ab-normal stress to the region. Typically, the pain arising from this joint is unilateral, increased by walking, get-ting off the bed, and climbing stairs, etc. Examination of this joint should be done in conjunction with the hip joint and lumbar spine as the pain may be re-ferred to this joint from those areas. Description of in-dividual tests used for assessing this joint is beyond the scope of the book. The gait, posture, alignment of bony structures, difference in leg length, and passive and active movements should be tested, and treat-ment aimed at normalizing the stresses on the lum-bopelvic complex should be based on the findings.