Movement Across the Joints 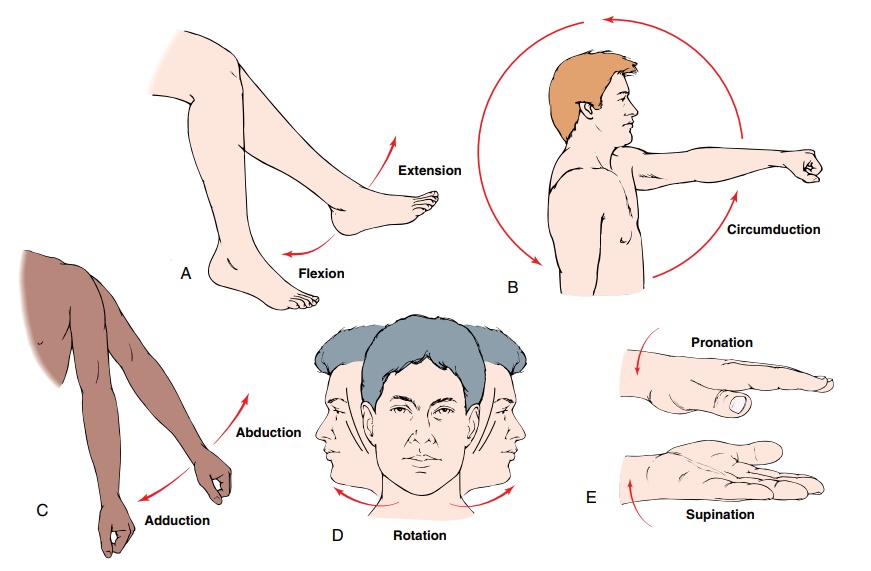 The type of movement possible across a joint de-pends on the shape of the articulating surfaces, the ligaments, structures around the joint, and the mus-cles that cross the joint.

MOVEMENT ACROSS THE JOINTS

The type of movement possible across a joint de-pends on the shape of the articulating surfaces, the ligaments, structures around the joint, and the mus-cles that cross the joint (see Figure 3.33).

If the articular surfaces are relatively flat, one pos-sible movement is gliding (i.e., the articulating sur-faces can move forward and backward or from side to side), similar to moving a book over the surface of the table without lifting the book. 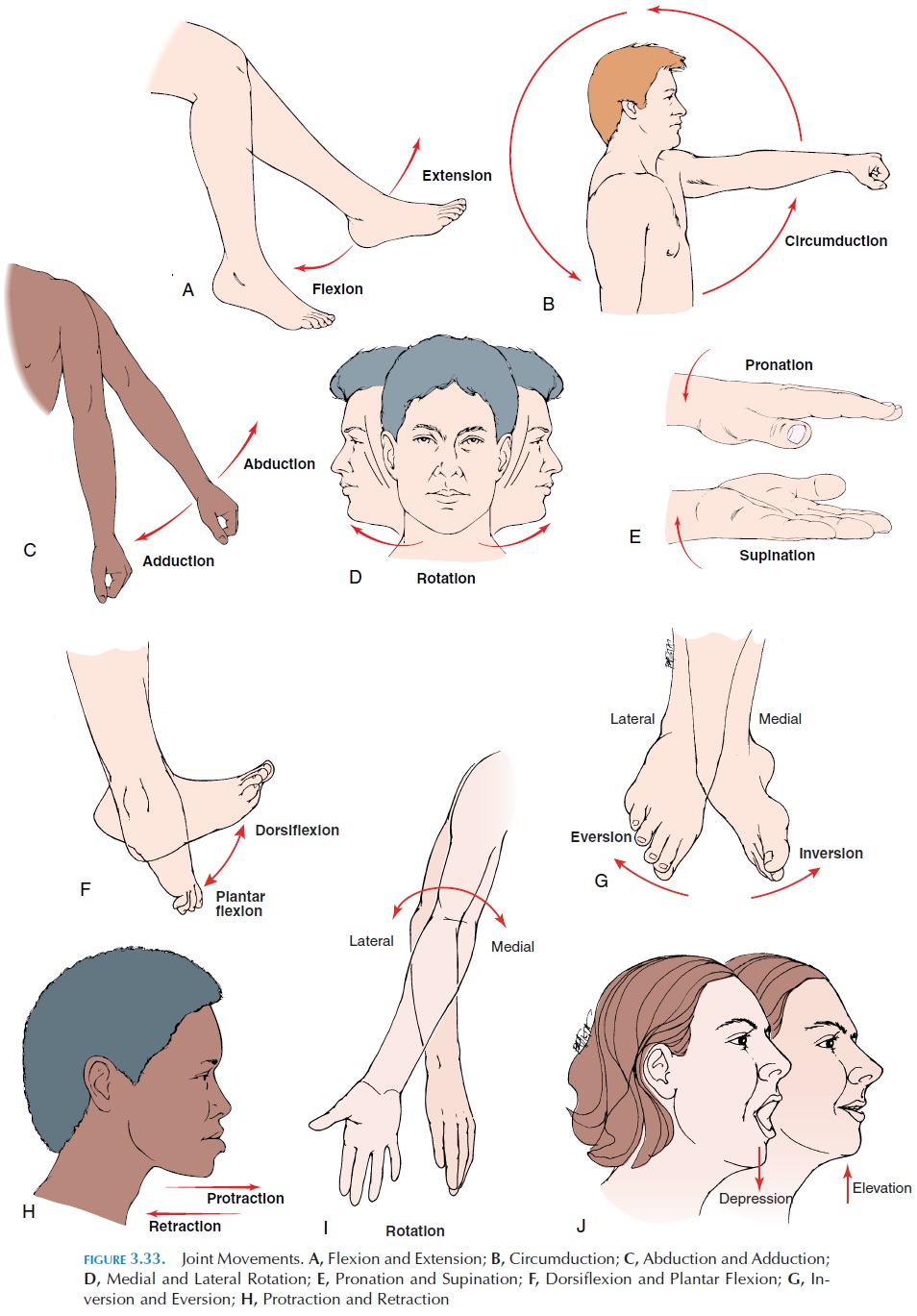 Next, with the point of the pencil still in contact with one point on the table, move the other end in a circle. This type of movement is known as circum-duction. This is the kind of movement your armmakes when you pitch a ball.

Try this: Keeping the point on the table, move the pencil so that the part of the pencil that originally faced you faces the opposite side (i.e., rotate it as in using a screwdriver). This movement is known as ro-tation. If the bone rotates towards the midline of thebody, it is known as medial, internal, or inward ro-tation. If the rotating movement is away from themidline of the body, it is known aslateral, external, or outward rotation.

These various, experimental movements have been named according to the direction of movement in re-lation to the anatomic position. The range of motion possible in each joint is described in relation to these terms.

bones For example, keep your arm straight beside you and bend your elbow so that your fingers touch your shoulder. This is flexion at the elbow. Now stand in the anatomic position and reduce the angle between the articulating surfaces of all the joints possible. What is your final position? You should be curled into a ball, with your fingers clenched and toes curled.

Extension is the opposite movement of flexion, inwhich the angle between the articulating bones is in-creased in the anterior/posterior plane. Extension atthe elbow will be bringing your arm to the side of your body after scratching the tip of your shoulder with your fingers. When you stand in the anatomic position, all your joints are extended. In some joints, it is possible to extend the articulating bones beyond the anatomic position. This is known as hyperexten-sion. When you move the head to look at the ceiling,you hyperextend your neck.

The opposite of abduction is adduction, in which the bone moves toward the longitudinal axis. Not all joints can adduct and abduct. Determine all the joints where adduction and abduction is possible. In the hand, the movement of the fingers away from the middle finger (i.e., spreading the fingers) is abduc-tion. Bringing the fingers toward the middle finger is adduction. In the foot, moving away from the second toe is considered as abduction. Because the thumb articulates in a plane at right angles to the other fin-gers, adduction of the thumb moves the thumb to-ward the palm in the sagittal plane.

A special type of movement is possible in humans because of the unique articulation of the thumb. This movement, which allows us to grasp tiny objects such as holding a pen or picking up a needle from the floor, is known as opposition, in which the thumb is able to touch or oppose each of the other fingers.

The movement in which you jut your jaw out— moving the bone anteriorly in the horizontal plane— is known as protraction. Retraction is the opposite of protraction. When the bone moves in a superior/ inferior direction, it is known as elevation and de-pression, respectively. When you open your mouth,your mandible is depressed and when you close the mouth, the mandible is elevated.

The movement in which the trunk is turned to the side, as in bending sideways, is known as lateralflexion.