From the axis to the sacrum, the vertebral bodies are separated from each other by fibrocartilage called intervertebral disks.

From the axis to the sacrum, the vertebral bodies are separated from each other by fibrocartilage called intervertebral disks. Each disk-shaped structure is made of a tough outer layer, the annulus fibrosus. The collagen fibers of this layer attach adjacent bod-ies of the vertebrae. The annulus fibrosus encloses a gelatinous, elastic and soft core called the nucleuspulposus. Seventy-five percent of this core is water,with scattered strands of elastic and reticular fibers. The disks serve as shock absorbers. They also allow the vertebrae to glide over each other slightly, with-out loosing alignment. Because the disks contribute to one-fourth of the length of the vertebral column, the height of the individual diminishes as the disks loose water and become narrower with age.

Disks can be compressed beyond normal limits. This can happen during a hard fall or whiplash injury or even when lifting heavy weights. If this happens, the nucleus pulposus distorts the annulus fibrosus and forces it into the vertebral canal or the intervertebral foramen. Sometimes it is the nucleus pulposus that protrudes into the canal or foramen in a condition called slipped disk, disk prolapse, or herniated disk.

The distorted disk can compress the spinal cord (in the canal) or the spinal nerves (in the foramen), leading to loss of function in areas supplied by the compressed nerves. It presents as severe backache or burning or tingling sensations in the region supplied by the nerves. Depending on the extent, control of skeletal muscle may also be lost. Some common regions where disks may prolapse are between C5–C6, L4–L5, and L5–S1. 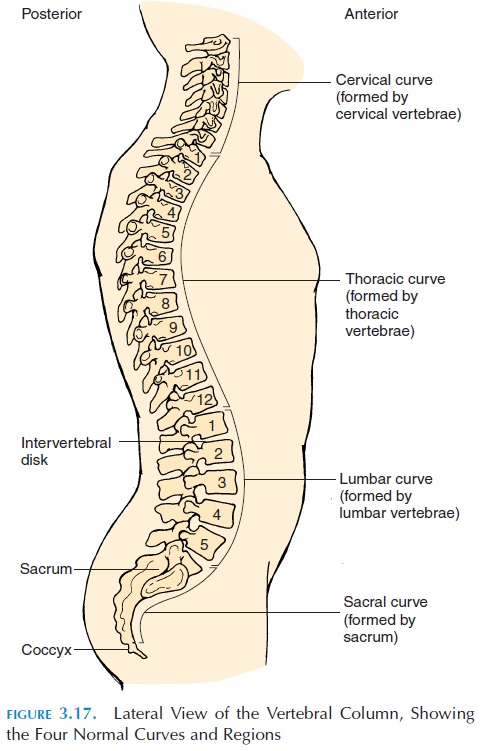