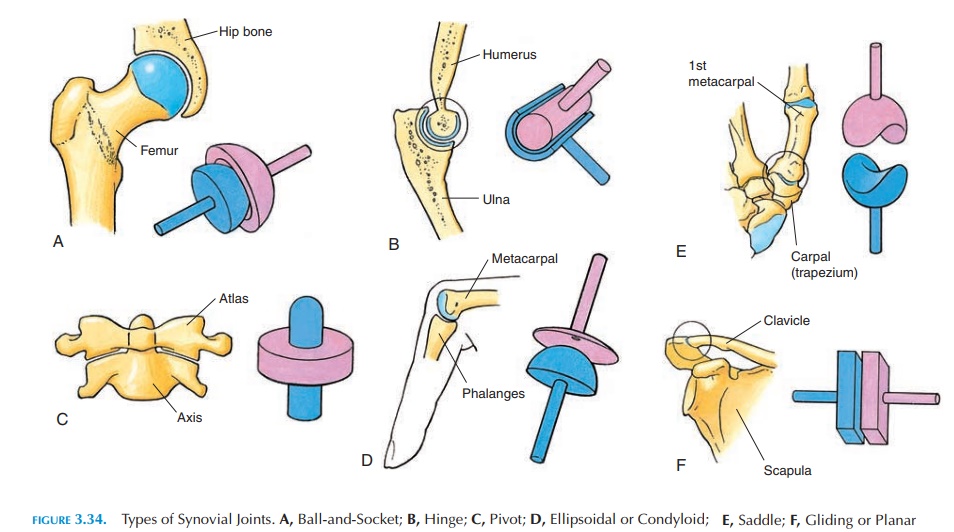 The synovial joints are classified according to the shapes of the articulating surfaces and the types of movements and range of motion they permit (see Figure 3.34).

The synovial joints are classified according to the shapes of the articulating surfaces and the types of movements and range of motion they permit (see Figure 3.34). The different subtypes of joints are balland socket, hinge, pivot, ellipsoidal or condyloid, saddle, and gliding or planar. These joints may alsobe classified as nonaxial, monaxial, biaxial, and multiaxial (or polyaxial) joints, according to themovements allowed along no axel, one axel, or two or more axels. In nonaxial joints, the movement allowed is not around any axis; in monaxial, the movement is along one axis; in biaxial, along two axes; and in mul-tiaxial, the movement occurs along three or more axes and in directions between these axes. 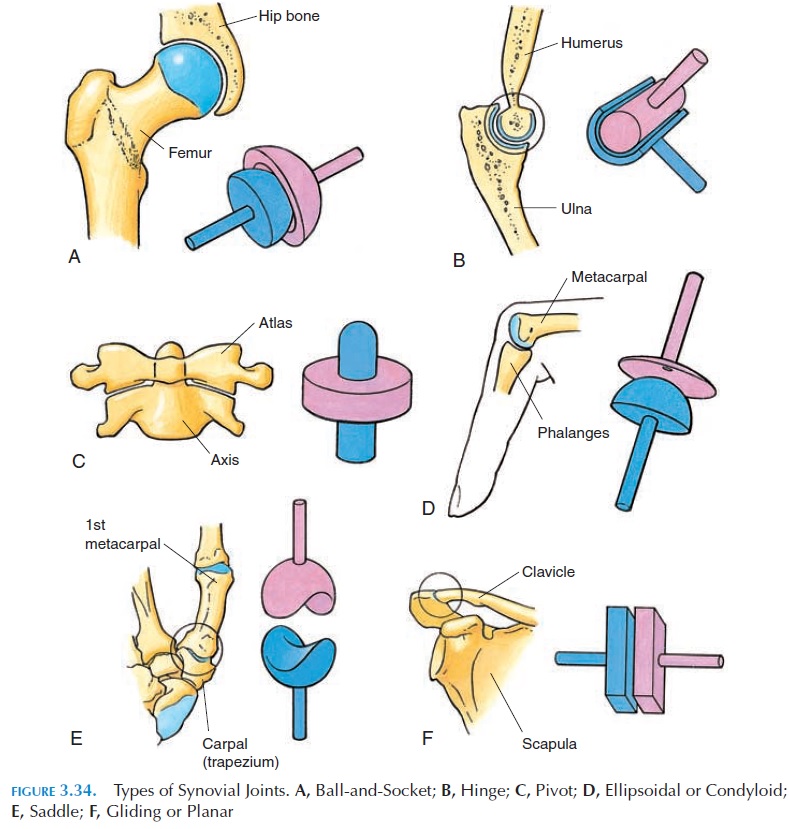 In a ball-and-socket joint, one of the articulating sur-faces is rounded like a ball and the other surface has a depression to fit the ball. These are multiaxial, the most mobile of joints, allowing all types of move-ments—angular and rotational. Therefore, flexion, extension, abduction, adduction, medial and lateral rotation, and circumduction are all possible (e.g., hip joint, shoulder joint)

The articulating surfaces are somewhat curved in a hinge joint, allowing movement in one plane (monax-ial) similar to the movement of a door. Here, flexion and extension is possible (e.g., elbow joint, knee joint, ankle joint, interphalangeal joint, and joint between the occipital bone and the atlas of the vertebra).

Here, too, the articulating surfaces permit monaxial movement like the hinge joint, but only rotation is possible (e.g., the joint between the first and second vertebra—the atlas and the axis, and the rotation of the head of radius over the shaft of the ulna proxi-mally).

In this biaxial joint, one of the articulating surfaces is oval and fits into a depression in the other articulat-ing surface. Here, movement is possible in two planes. Flexion, extension, adduction, abduction, in-cluding circumduction is possible, but rotation is not (e.g., the articulation between the distal end of radius with the carpal bones, phalanges with the metacarpal bones, and phalanges with the metatarsal bones).

In this biaxial joint, the articulating surfaces resemble a saddle, being concave in one axis and convex in an-other. It is a modified condyloid joint that allows freer movement. The saddle joint allows angular movements but prevents rotation. Therefore, flexion, extension, ad-duction, abduction, circumduction, and opposition are possible in this joint (e.g., articulation between the carpal bone and metacarpal bone of the thumb).

The articulating surfaces are flattened or slightly curved and allow sliding movements. These are non-axial joints. The range of motion is slight and rota-tional movements, although possible, are restricted by bones, ligaments and tendons around the joint (e.g., at the ends of clavicle, between carpal bones, between tarsal bones, and between the articulating facets of spinal vertebrae).