Pectoral Girdle and the Upper Limbs

The upper arm articulates with the trunk at the shoulder, or pectoral girdle.

PECTORAL GIRDLE AND THE UPPER LIMBS

The muscles attached to the pec-toral girdle stabilize the shoulder while upper limb movements are produced. Ridges and thickened ar-eas are seen in regions of the scapula and clavicle where these powerful muscles are attached.

The clavicle (see Figure 3.22) is the S-shaped bone seen or felt below the neck, along the front of the shoulder. The medial part of the clavicle is convex anteriorly and extends laterally and somewhat horizontally from the manubrium of the sternum to the tip of the shoulder. 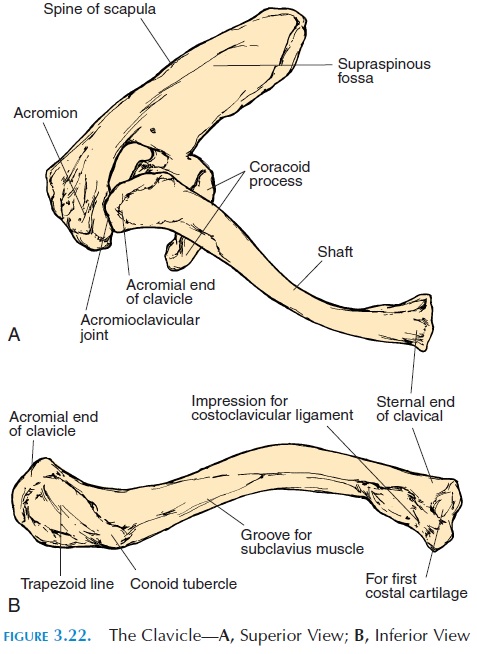 The end closest to the sternum is the sternal end, and it articulates with the manubrium of the sternum (ster-noclavicular joint). The other end is the acromial end; it articulates with the acromion of the scapula (acromioclavicular joint). Fractures of the clavicle of-ten occur after a fall on the outstretched hand. The fracture tends to be in the midregion where the two curves of the clavicle meet. Most clavicular fractures do not require a cast because they heal rapidly.

The scapula (see Figures 3.22 and 3.23), or the shoul-der blade, is a triangular bone with some projections on the upper lateral angle of the triangle.

It extends over the second and seventh ribs on the posterior and superior aspect of the thorax. The three sides of the triangle are the superior border; medial, or verte-bral border; and thelateral,or axillary border. Theangles of the triangle are the superior angle, infe-rior angle, and lateral angle. The lateral angle isthickened and rounded—the neck, before it widens to form the cup-shaped glenoid fossa. The glenoid fossa articulates with the upper end of the humerus at the scapulohumeral joint or shoulder joint. A rough surface on the superior aspect of the fossa (supraglenoid tubercle), denotes the location of the attachment of the long head of the biceps. A rough surface on the inferior aspect of the fossa (infraglen-oid tubercle) gives the location of attachment of thelong tendon of the triceps. Two prominent extensions extend over the superior aspect of the glenoid fossa. The smaller, anterior extension is the coracoidprocess. The larger, posterior prominence is the acromion process. The acromion articulates withthe lateral end of the clavicle at the acromioclavicu-lar joint. Both processes are sites of attachment of ligaments and tendons of muscles.

The humerus (see Figure 3.24) is a bone of the upper limb. The bones of the upper limb include the arm, forearm, wrist, and hand. The humerus extends from the shoulder to the elbow. It is a long bone with a rounded upper end called the head, a long shaft, and a widened, lower end that articulates with the ulna and radius (bones of the forearm). The head articu-lates with the glenoid fossa of the scapula. There are two prominences on the lateral surface of the head known as the greater and lesser tubercles. If you run your hand lateral to the tip of the acromion process, you will feel the greater tubercle as a bump anterior and inferior to the process. 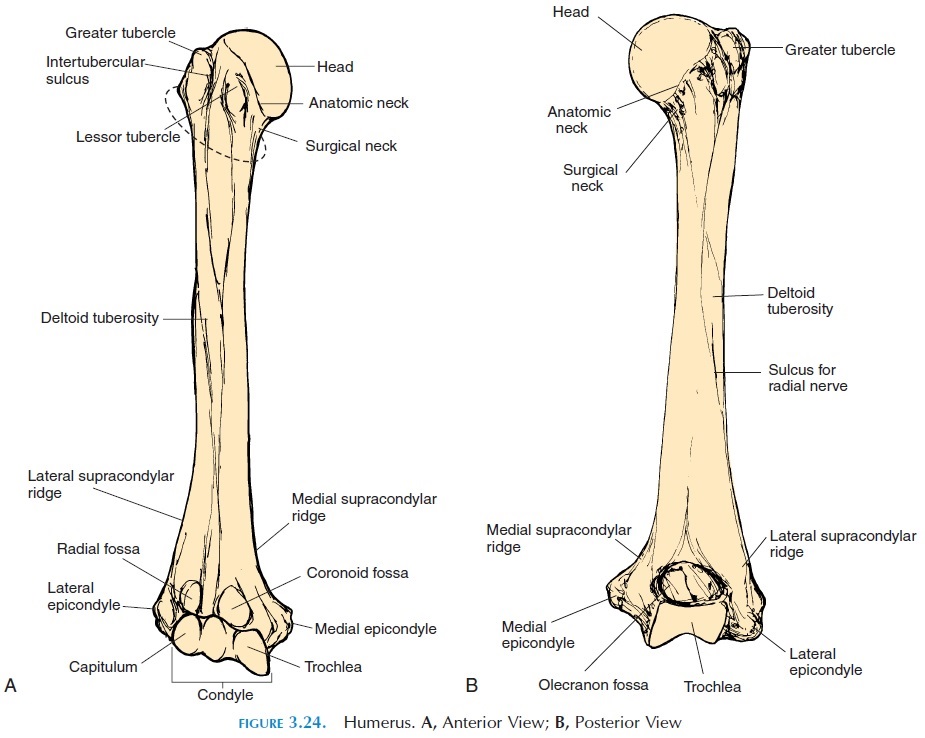 The intertubercular groove, or the intertubercu-lar sulcus, runs between the two tubercles. The ten-don of the biceps runs in this groove to attach to the supraglenoid tubercle of the scapula. As previously explained, the bumps and ridges in bones are loca-tions where muscles are attached. The head of the humerus narrows a little between the tubercles and the articular surface (the smooth area on the head). This is the anatomic neck. The capsule that sur-rounds the shoulder joint ends at the anatomic neck; however, what actually looks like a neck, is the nar-rowing inferior to the tubercles. This narrowed area is called the surgical neck because this is the region where fractures are common.

A bump is located on the lateral surface of the shaft, near the halfway point; this is the deltoidtuberosity. The deltoid muscle (the muscle that givesthe rounded effect to the shoulder) is attached at this point. A depression in the posterior surface of the shaft—the radial/spiral groove—indicates the path taken by the radial nerve as it runs down the arm.

Pressure on the ulnar nerve, which is relatively su-perficial posterior to the medial epicondyle, is re-sponsible for the tingling felt when an individual ac-cidentally hits an elbow against an object.

The posterior aspect of the lower end of the humerus has one depression. This is the olecranonfossa, where the olecranon process of the ulna is ac-commodated when the elbow is extended. On the an-terior aspect, there are two depressions. The lateral depression is the radial fossa, where a projection from the radius is accommodated. Medially, there is another depression known as the coronoid fossa. This, too, accommodates a process, the coronoid process of the ulna when the elbow is flexed.

The ulna (see Figure 3.25), together with the radius, forms the bones of the forearm. The ulna is located medially. The proximal end of the ulna has two processes, theolecranon process that forms the su-perior and posterior portion and the coronoidprocess that forms the anterior and inferior process.The depression between the two processes is the trochlear notch. This is the part of the ulna that ar-ticulates with the trochlea of the humerus. This joint is known as the olecranon joint or thehumeroulnarjoint. Just inferior to the coronoid process, is the ul-nar tuberosity. A slight depression on the lateral sideof the ulna indicates the surface that articulates with the radius, the radial notch. This is the radioulnarjoint. Other than the joint, the radius and ulna areheld together by a thick sheet of connective tissue that runs from the lateral border of the ulna (in-terosseous border) to the radius. This is the in-terosseous membrane. The lower end of the ulnahas a rounded head and a small projection on the posterior aspect called the styloid process. 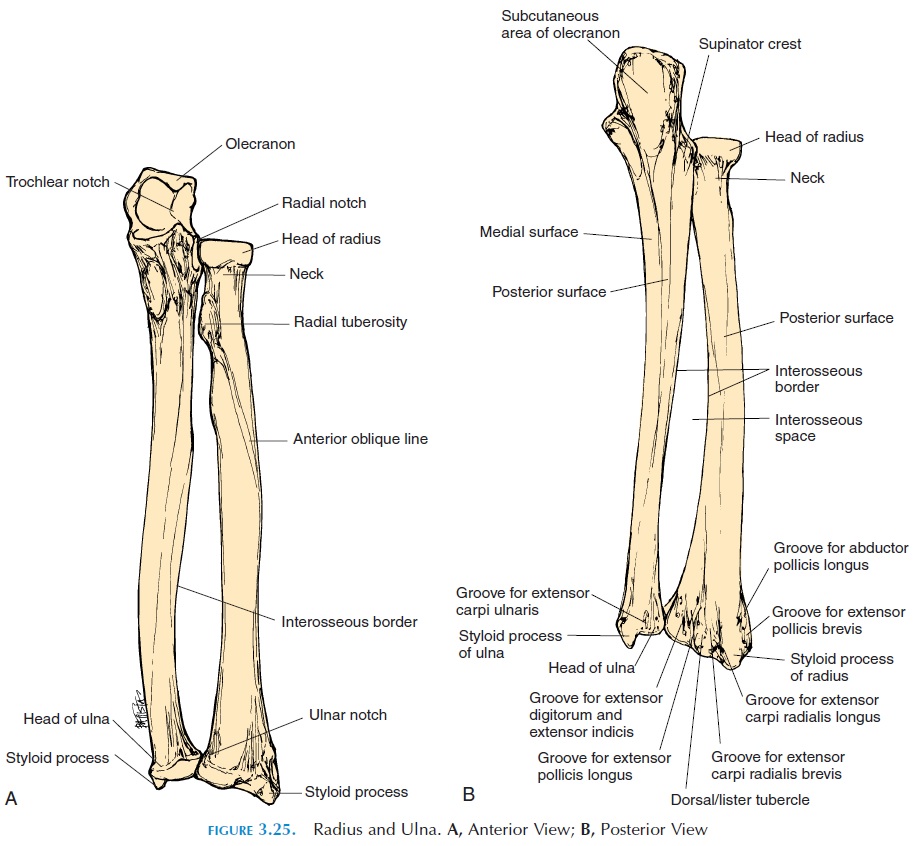 The rounded, upper end of the radius (Figure 3.25) is called the head. Note that the head of the ulna is dis-tal and that the radius is proximal. The head articu-lates with the capitulum of the humerus and the ra-dial notch of the ulna (proximal radioulnar joint). It narrows to form a neck and continues on to a promi-nence, the radial/bicipital tuberosity. The bicep is inserted to this region. The radius also has an in-terosseous border to which the interosseous mem-brane is attached. A slight, roughened area on the middle of the convex lateral aspect of the shaft of the radius is the pronator tuberosity, to which the pronator teres (muscle) is attached.

The distal end of the radius is widened. This sur-face articulates with the bones of the wrist: lunate, scaphoid, and the triquetrum (radiocarpal joint). A small projection in the lateral aspect is the styloidprocess of the radius. A depression in the medial sur-face of the lower end, the ulnar notch, indicates the location of articulation with the ulnar head (distal ra-dioulnar joint). When the palm is turned back— pronation (Remember the anatomic position?), theulnar notch of the radius glides over the head of the ulna. In this position, the lower end of the radius is located medially; hence, the importance of having an anatomic position. When the palm faces forward— supination, the radius and ulna lie side by side.

The eight carpal bones are lined up in two rows: four proximal and four distal. The proximal carpals, lat-eral to medial, are scaphoid, lunate, triangular or triquetrum,and pisiform. The distal carpals are the trapezium, trapezoid, capitate, and hamate.

The carpals are held together by ligaments. They articulate with each other at intercarpal joints that al-low some gliding and twisting. Anteriorly, the flexorretinaculumligament runs across the carpals fromside to side, enclosing a tunnel through which ten- dons of muscles going to the hand, along with nerves and blood vessels, pass. This is the carpal tunnel (see Common Wrist Ailments). The compression of the median nerve located in this tunnel is responsible for the various symptoms of carpal tunnel syndrome. 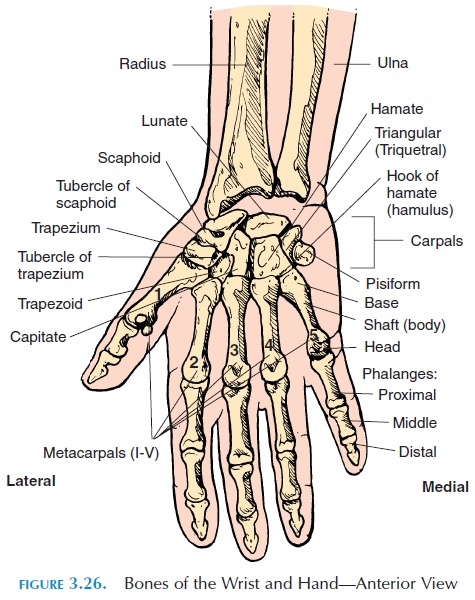