Linear Equation in One Variable

Linear Equation in One Variable

We shall recall some earlier ideas in algebra.

What is the formula to find the perimeter of a rectangle? If we denote the length by l and breadth by b, the perimeter P is given as P = 2(l + b). In this formula, 2 is a fixed number whereas the literal numbers P, l and b are not fixed because they depend upon the size of the rectangle and hence P, l and b are variables. For rectangles of different sizes, their values go on changing. 2 is a constant (which does not change whatever may be the size of the rectangle).

An algebraic expression is a mathematical phrase having one or more algebraic terms including variables, constants and operating symbols (such as plus and minus signs).

Example: 4x2 + 5x + 7xy + 100 is an algebraic expression; note that the first term 4x2 consists of constant 4 and variable x2. What is the constant in the term 7xy? Is there a variable in the last term of the expression?

We now to translate a few statements into an algebraic language and recall how to frame expressions. Here are some examples: 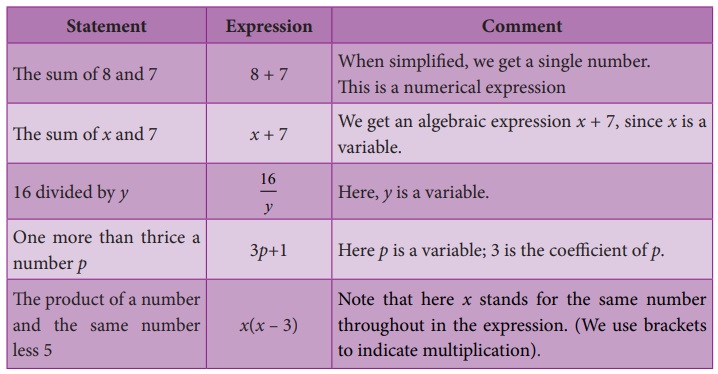 An equation is a statement that asserts the equality of two expressions; the expressions are written one on each side of an “equal to” sign.

An equation containing only one variable with its highest power as one is called a linear equation. Examples: 3x – 7 = 10.

Linear equations in one or more variables:

An equation is formed when a statement is put in the form of mathematical terms.

Here are some examples:

This equation x + 5 = 25 is formed by one variable (x) whose highest power is 1. So it is called a linear equation in one variable.

Therefore, an equation containing only one variable with its highest power as one is called a linear equation in one variable.

This linear equation in one variable is also known as simple equation.

This equation x + y = 45 is formed by two variables x and y whose highest power is 1. Hence, we call it as a linear equation in two variables.

The equations so formed with power more than 1 of its variables, (2,3....etc.) are called as quadratic, cubic equations and so on.

Identify which among the following are linear equations.

Let the number be n.

Let the number be x.

Now the result should be 28.

Given that on subtracting 8 from product of 5 and a, we get 32

• The sum of three consecutive integers is 78.

Sum of 3 consecutive integers is 78

• Peter had a Two hundred rupee note. After buying 7 copies of a book he was left with ₹60.

Let cost of one book be ‘x’

• The base angles of an isosceles triangle are equal and the vertex angle measures 80°.

Let base angles each be equal to x & vertex bottom angle is 80°. Applying triangle property, sum of all angles is 180°

• In a triangle ABC, ∠A is 10o more than ∠B. Also ∠C is three times ∠A. Express the equation in terms of angle B.

4. Solution of a linear equation 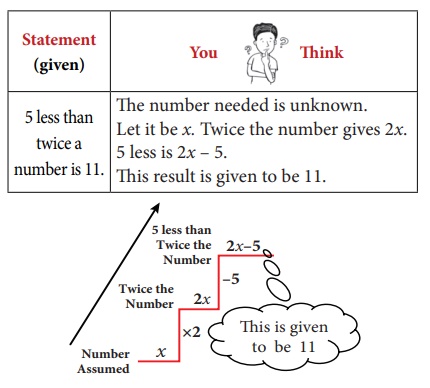 This formation of equation can be visualized as follows:

From the number x, we reached 2x – 5 by performing operations like subtraction, multiplication etc. So when 2x – 5 = 11 is given, to get back to the value of x, we have to 'undo' all that we did! Thus, we ‘do’ to form the equation and ‘undo’ to get the solution. 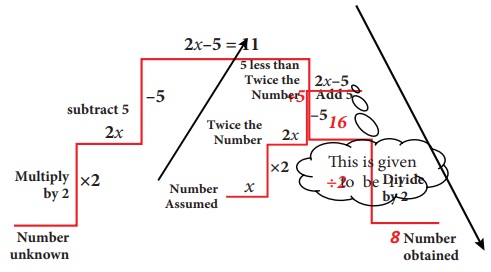 The shift ing of a number from one side of an equation to other is called transposition.

For the above example, (a) doing addition of 7 on both sides is the same as changing the number –7 on the left hand side to its additive inverse +7 and add it on the right hand side.

Can you get more than one solution for a linear equation?

Yes, we can get. Consider the below line or equation

Hence, we get multiple solutions for the same linear equation.

likewise, (b) doing division by 3 on both sides is the same as changing the number 3 on the LHS to its reciprocal 1/3 and multiply it on the RHS and vice-versa.

While rearranging the given linear equation, group the like terms on one side of the equality sign, and then do the basic arithmetic operations according to the signs that occur in the expression.

1. “An equation is multiplied or divided by a non zero number on either side.” Will there be any change in the solution?

Not be any change in the solution

2. “An equation is multiplied or divided by two different numbers on either side”. What will happen to the equation?

When an equation is multiplied or divided by 2 different numbers on either side, there will be a change in the equation & accordingly, solution will also change.