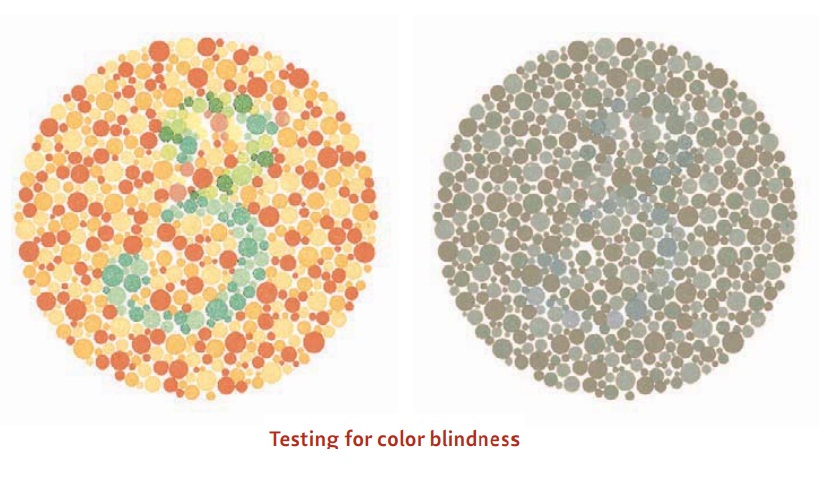 The perception of color enhances our appreciation of art and, more practically, allows us to distinguish a ripe fruit from a green one.

The perception of color enhances our appreciation of art and, more practically, allows us to distinguish a ripe fruit from a green one. Other aspects of vision are far more important. After all, a color-blind individual can live a perfectly normal life. But the same can’t be said for an individual who can’t tell a square from a circle, and can’t tell whether the shape in front of her is that of an apple or that of a banana. These individuals (known as visual agnosics) are dramatically impaired in their functioning. We therefore need to ask how the visual system manages the perception of shape.

Recordings from individual nerve cells have allowed electrophysiologists to examine how particular cells in the visual system respond to certain stimuli. In these studies, researchers place a microelectrode into the optic nerve—or, in many studies, into the brain of an anesthetized animal. The animal’s well-being is carefully monitored, both for ethical reasons and to allow the investigators to assess how neurons function in an intact, healthy organism. The animal’s eye is then stimulated by visual inputs of varying brightness and different shapes, arriving at the eye from different locations (Figure 4.41). In this way, the investigator can learn which stimuli evoke a response from that cell. 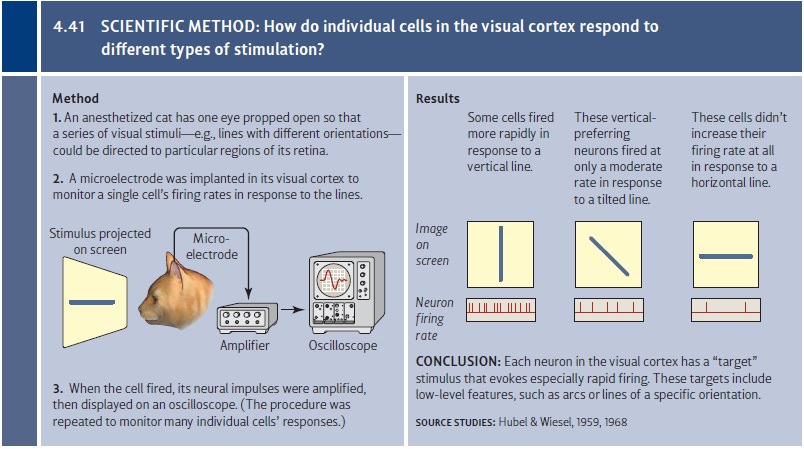 Results from these studies show that the cells in the visual system—whether we’re considering the rods and cones themselves, neurons in the optic nerve, or neurons in the brain—all have a preferred target, a certain type of stimulus that’s especially effec-tive in causing that cell to fire. We can think of the cells, therefore, as “detectors,” each one tuned for (and so likely to detect) its own set of targets.

What sorts of detectors does the visual system rely on? The answer depends on the species. Frogs, for example, need only a few bits of information about the world: “What’s that large shape moving toward me? Just in case it’s a predator, I’ll take a leap to safety.” “What’s that small, dark shape moving around? It might be a fly, so I think I’ll flick my tongue at it.” Because they need so little information to survive, frogs have just a few detector types—and they’re located on the retina, so the frog can quickly ana-lyze the input and act on it (Lettvin, Maturan, McCulloch, & Pitts, 1959).

Unlike frogs, most animals—including the mammals—need more detailed infor-mation about the world around them. Their visual systems perform a more complex analysis, supported by a greater variety of detector types, located in the cortex as well as on the retina. Most of what we know about this visual analysis comes from the work 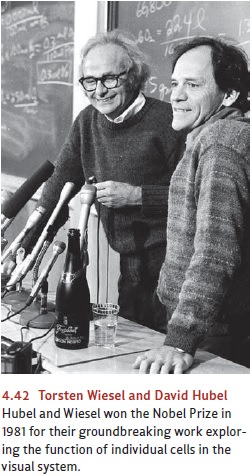 of David Hubel and Torsten Wiesel, who won a Nobel Prize for their research (Figure 4.42). Working first with cats and then with primates, these investigators confirmed that each cell in the visual cortex responds to stimuli in only a limited region of space—or, equivalently, each cell in the retina responds to stimuli on only a limited region of the retina. This region defines that cell’s receptive field (Figure 4.43). More important, this research made it plain that cells differ in the types of detectors they are. Some cells have receptive fields of a special size, location, and shape—and so they fire at their maximum rate only when the visual input is a line of a specific orientation at a specific retinal position. One such cell might respond to a vertical line at one posi-tion in the visual field, while another cell might respond to a line tilted to 45 degrees at the same position; still another cell might respond to a vertical line at some other position. In this way, and because the visual field is blanketed by receptive fields, lines of any orientation at any position will be detected by the appropriate type of cell (Hubel & Wiesel, 1959, 1968).

Other cells in the visual cortex are a bit more sophisticated. They also fire only in response to a line or edge of a particular orientation, but they’re largely indifferent to the line’s specific location within the visual field (see Figure 4.41). Cells like these serve as feature detectors, detecting certain elements within the visual pattern. Other cells, deeper within the visual system, presumably then assemble these now detected elements in order to detect larger configurations and more complex patterns.

Consistent with this suggestion, Hubel and Wiesel were able to locate other cells that responded only to more complicated inputs. For example, some cells responded maximally to corners or particular angles. Other cells responded to movement pat-terns, firing maximally only when they detected movement of the appropriate velocity and direction.

It’s easy to see how feature detectors might be useful. Let’s say that a pattern of visual input reaches your retina and triggers a “horizontal-line detector” and a “vertical-line detector.” When these two detectors fire at the same time, this event might trigger a response in a “right-angle detector.” If at the same time you’ve also detected three other right angles, this combination might trigger a response from your “square detector.” Activity in this detector might then combine with activity in other detectors and even-tually lead you to say, “Oh, look—there’s my Intro Psych textbook.”

In this way, the feature detectors we’ve just discussed might be the starting point for a hierarchy of detectors that leads, step-by-step, from simple features to slightly more complex shapes to still more complex shapes. And eventually, the steps will lead to detectors that fire only in response to the sight of a complex object in the world—such as the letter Q, or your mother’s face, or a sports car.

Still, it seems highly unlikely that such built-in mechanisms could account for all the forms that higher animals—especially humans—perceive and recognize. Simple crea-tures like frogs are able to recognize only a few patterns, so it’s reasonable to think they might have specialized detectors for each one. In contrast, humans easily discriminate among a multitude of patterns; and this simple fact speaks powerfully against the idea that we might have specialized detectors for each of them—triangles, squares, apples, apple pies, champagne bottles, cabbages, kings—the list is endless. We know that the perception of any kind of form begins with a feature analysis; this process is plain in the functioning of the detector cells. But how do we integrate these features to create more complex forms? The answer to this question is surprisingly complex.