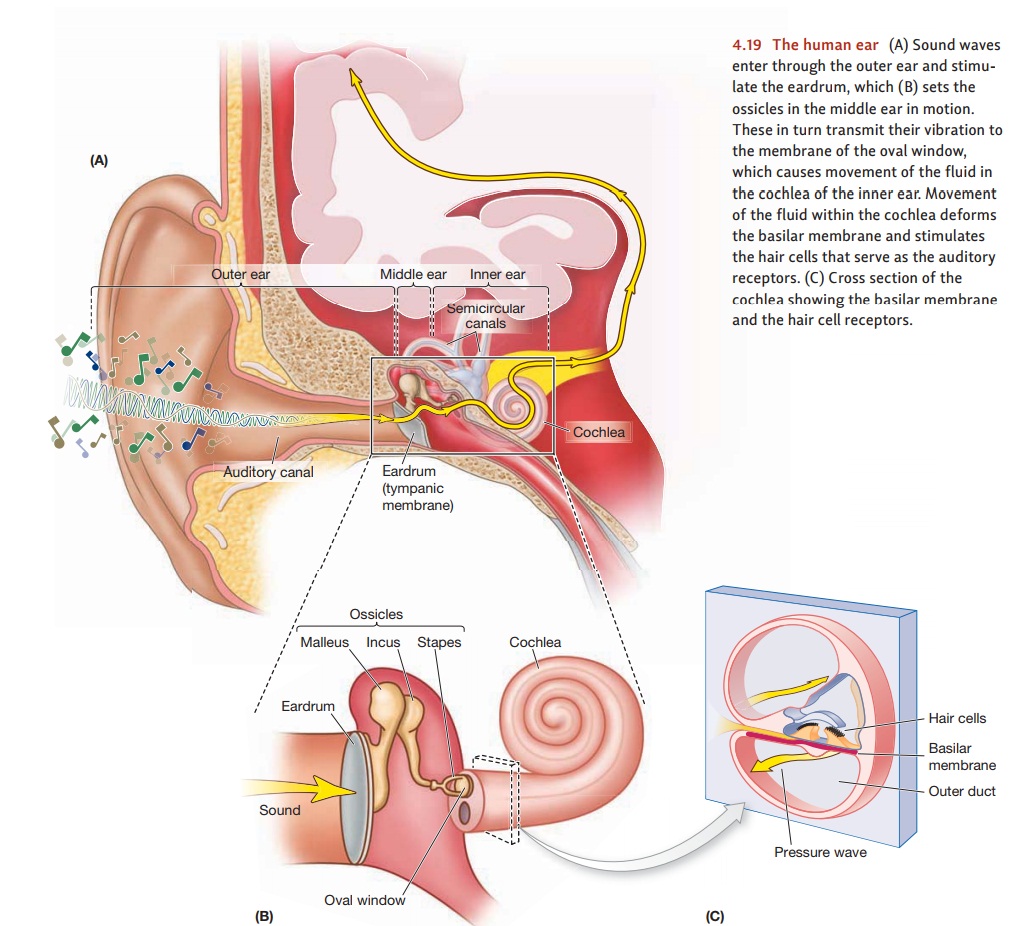 Mammals have their receptors for hearing deep within the ear, in a snail-shaped struc-ture called the cochlea. To reach the cochlea, sounds must travel a complicated path (Figure 4.19). The outer ear collects the sound waves from the air and directs them toward the eardrum, a taut membrane at the end of the auditory canal. The sound waves make the eardrum vibrate, and these vibrations are then transmitted to the oval win-dow, the membrane that separates themiddle earfrom theinner ear. This transmissionis accomplished by a trio of tiny bones called the auditory ossicles—the smallest bones in the human body. The vibrations of the eardrum move the first ossicle (the malleus), which then moves the second (the incus), which in turn moves the third (the stapes). The stapes completes the chain by sending the vibration pattern on to the oval window, which the stapes is attached to. (The ossicles are sometimes referred to by the English translations of their names—the hammer, the anvil, and the stirrup, all references to the bones’ shapes.) The movements of the oval window then give rise to waves in the fluid that fills the cochlea, causing (at last) a response by the receptors. 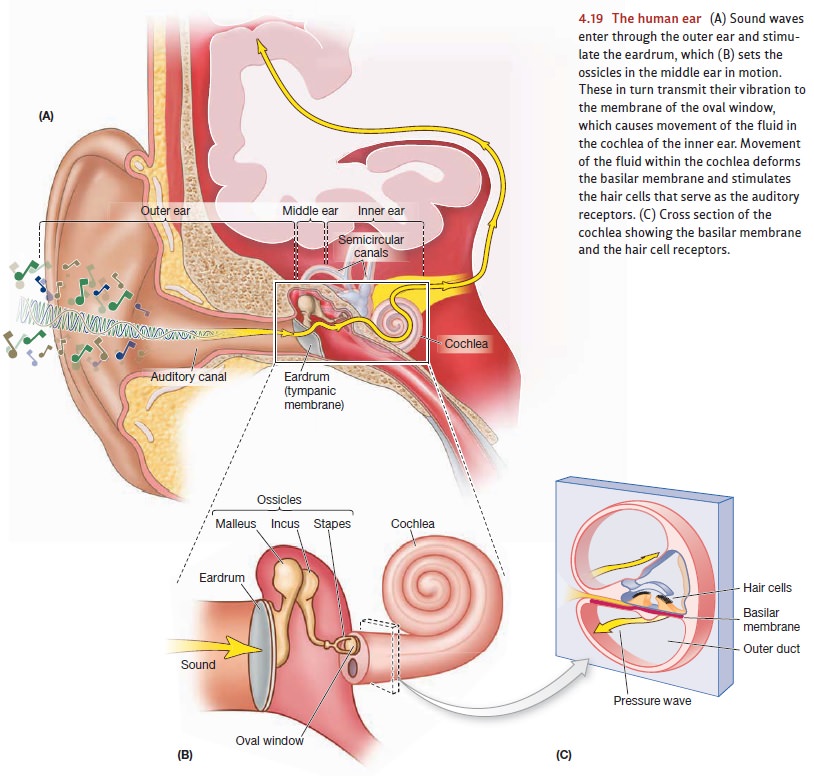 Why do we have this roundabout method of sound transmission? The answer lies in the fact that these various components work together to create an entirely mechanical— but very high-fidelity—amplifier. The need for amplification arises because the sound waves reach us through the air, and the proximal stimulus for hearing is made up of minute changes in the air pressure. As we just mentioned, though, the inner ear is (like most body parts) filled with fluid. Therefore, in order for us to hear, the changes in air pressure must cause changes in fluid pressure—and this is a problem, because fluid is harder to set in motion than air is.

To solve this problem, the pressure waves have to be amplified as they move toward the receptors; this is accomplished by various features of the ear’s organization. For example, the outer ear itself is shaped like a “sound scoop” so it can funnel the pressure waves toward the auditory canal. Within the middle ear, the ossicles use mechanical leverage to increase the sound pressure. Finally, the eardrum is about 20 times larger than the portion of the oval window that’s moved by the ossicles. As a result, the fairly weak force provided by sound waves acting on the entire eardrum is transformed into a much stronger pressure concentrated on the (smaller) oval window.

TRANSDUCTION IN THE COCHLEA

For most of its length, the cochlea is divided into an upper and lower section by several structures, including the basilar membrane. The actual auditory receptors—the 15,000 hair cells in each ear—are lodged between the basilar membrane and other membranes above it (Figure 4.19c).

Motion of the oval window produces pressure changes in the cochlear fluid that, in turn, lead to vibrations of the basilar membrane. As the basilar membrane vibrates, its deformations bend the hair cells; this bending causes ion channels in the membranes of these cells to open, triggering the neural response. Sound waves arriv-ing at the ear generally cause the entire basilar membrane to vibrate, but the vibra-tion is not uniform. Some regions of the membrane actually move more than others, and the frequency of the incoming sound determines where the motion is greatest. For higher frequencies, the region of greatest movement is at the end of the basilar membrane closer to the oval window; for lower frequencies, the greatest movement occurs closer to the cochlear tip.

More than a century ago, these points led Hermann von Helmholtz (Figure 4.20) to propose the place theory of pitch perception. This theory asserts that the nervous sys-tem is able to identify a sound’s pitch simply by keeping track of where the movement is greatest along the length of the basilar membrane. More specifically, stimulation of hair cells at one end of the membrane leads to the experience of a high tone, while stim-ulation of hair cells at the other end leads to the sensation of a low tone (Figure 4.21). 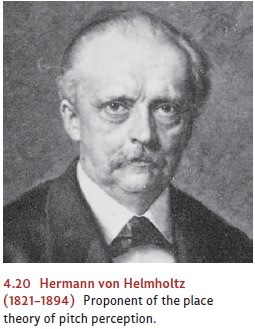 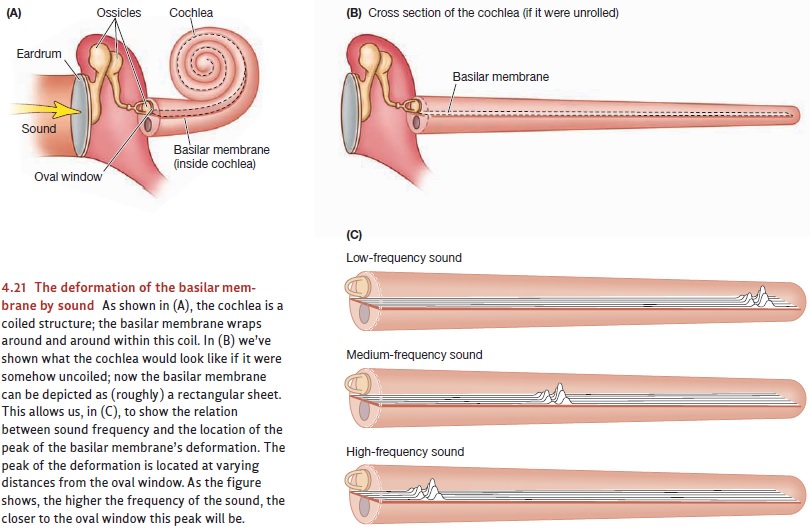 There’s a problem with this theory, though. As the frequency of the stimulus gets lower and lower, the pattern of movement it produces on the basilar membrane gets broader and broader. At frequencies below 50 hertz, the movement produced by a sound stimulus deforms the entire membrane just about equally. Therefore, if we were using the location of the basilar membrane’s maximum movement as our cue to a sound’s frequency, we’d be unable to tell apart any of these low frequencies. But that’s not what happens; humans, in fact, can discriminate frequencies as low as 20 hertz. Apparently, then, the nervous system has another way of sensing pitch besides basilar location.

This other means of sensing pitch is tied to the firing rate of cells in the auditory nerve. For lower-pitched sounds, the firing of these cells is synchronized with the peaks of the incoming sound waves. Consequently, the rate of firing, measured in neural impulses per second, ends up matched to the frequency of the wave, measured in crests per second. This coding, based on the exact timing of the cells’ firing, is then relayed to higher neural centers that interpret this information as pitch.

Neurons carry the auditory signals from the cochlea to the midbrain. From there, the signals travel to the geniculate nucleus in the thalamus, an important subcortical structure in the forebrain . Other neurons then carry the signal to the primary projection areas for hearing, in the cortex of the temporal lobe. These neurons and those that follow have a lot of work to do: The auditory signal must be analyzed for its timbre—the sound quality that helps us distinguish a clarinet from an oboe, or one person’s voice from another’s. The signal must also be tracked across time, to evaluate the patterns of pitch change that define a melody or to distinguish an assertion (“I can have it”) from a question (“I can have it?”). The nervous system must also do the analysis that allows us to identify the sounds we hear—so we know that we heard our cell phone and not someone else’s, or so we can recognize the words someone is speaking to us. Finally, the nervous system draws one other type of information from the sound signal: Pretty accurately, we can tell where a sound is coming from—whether from the left or the right, for example. This localization is made possible by several cues, including a close comparison of the left ear’s signal and the right ear’s, as well as by tracking how the arrival at the two ears changes when we turn our head slightly to the left or right.

Let’s keep our focus, though, on how we can detect a sound’s pitch. It turns out that each neuron along the auditory pathway responds to a wide range of pitches, but even so, each has a “preferred” pitch—a frequency of sound to which that neuron fires more vigorously than it fires to any other frequency. As in the other senses, this pattern of responding makes it impossible to interpret the activity of any individual neuron: If, for example, the neuron is firing at a moderate rate, this might mean the neuron is responding to a soft presentation of its preferred pitch, or it might mean the neuron is responding to a louder version of a less preferred pitch.

To resolve this ambiguity, the nervous system must compare the activity in each of these neurons to the level of activity in other neurons, to determine the overall pattern. So the detection of pitch, just like most of the other senses, relies on a “pattern code.” This process of comparison may be made easier by the fact that neurons with similar preferred pitches tend to be located close to each other on the cortex. This arrangement creates what’s known as a tonotopic map—a map organized on the basis of tone. For example, Figure 4.22 shows the results of a careful mapping of the audi-tory cortex of the cat. There’s an obvious ordering of preferred frequencies as we move across the surface of this brain area. 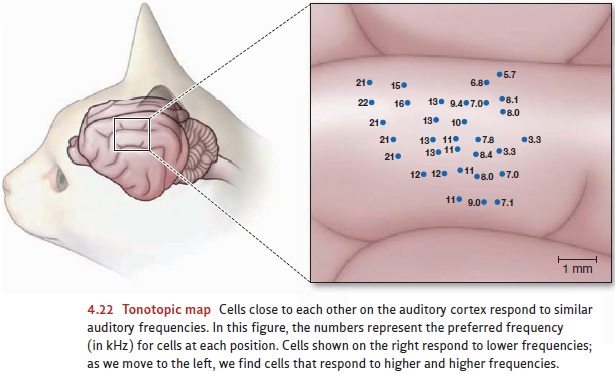