A Survey of the Senses: Sensory Adaptation

One further consideration is also relevant to all the sensory systems.

One further consideration is also relevant to all the sensory systems. Of course, our sensory responses are influenced by the physical magnitude of the stimulus—and so the taste buds respond more powerfully to a concentrated sugar solution than a weak one; the eye responds more strongly to a bright light than a dim one. But our sensory responses are also influenced by changes. Thus, a sugar solution will taste much sweeter if you’ve just been tasting something salty; a blast of room-temperature air will feel quite warm on your skin if you’ve just come in from the cold.

The importance of change in shaping our sensations shows up in many settings— including the phenomenon of sensory adaptation. This term refers to the way our sen-sory apparatus registers a strong response to a stimulus when it first arrives, but then gradually decreases that response if the stimulus is unchanging. Thus, when we first walk into a restaurant, the smell of garlic is quite noticeable; but after a few minutes, we barely notice it. Likewise, the water may feel quite hot when you first settle into the bathtub; a few moments later, the sensation of heat fades away.

Sensory adaptation is easily documented both in the lab and informally. Here’s an example: Stare at the dot in the center of Figure 4.9, trying not to move your eyes at all. After 15 or 20 seconds, the gray haze surrounding the dot will probably appear to shrink and may disappear altogether. (The moment you move your eyes, the haze is restored.) 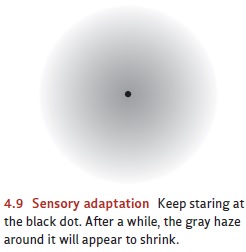 What’s happening in this case? The gray haze is initially a novel stimulus, so it elic-its a strong response from the visual system. After a moment or two, the novelty is gone; and, with no change in the input, the response is correspondingly diminished. It’s important for this demonstration, though, that the haze has an indistinct edge. While looking at the figure, your eyes will tremble just a bit, so the image of the haze will shift slightly from one position on your eye to another. But, because the edge of the haze is blurred, these shifts will produce very little change in the stimulation—so the haze slowly vanishes from view. (With more sharply defined contours, small changes in eye position will cause large changes in the visual input. As a result, even the slightest jit-ter in the eye muscles will provide new information for the visual system. This helps us understand why you can stare out the window for many minutes, or stare at a computer screen, without the input seeming to vanish!)

What do organisms gain by this sort of sensory adaptation? Stimuli that have been around for a while have already been inspected; any information they offer has already been detected and analyzed. It’s sensible, therefore, to give these already checked inputs less sensory weight. The important thing is change—especially sudden change—because it may well signify food to a predator and death to its potential prey.