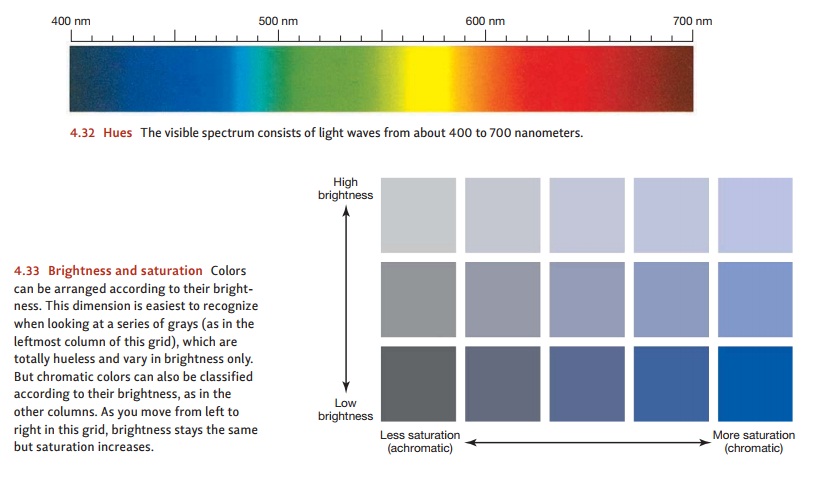 Clearly, then, interaction among sensory elements can shape the sensory input.

Clearly, then, interaction among sensory elements can shape the sensory input. In par-ticular, this process can highlight elements such as boundaries and moments of change that are of particular interest to the organism. This pattern of interaction is also evident when we consider a different aspect of vision—namely, the perception of color.

Second, brightness is the dimension of color that differentiates black (low brightness) from white (high brightness) and distinguishes the various shades of gray in between. Black, white, and all of the grays are the achromatic colors; they have no hue. But bright-ness is also a property of the chromatic colors (purple, red, yellow, and so forth). Thus, ultramarine blue is darker (i.e., has a lower brightness) than sky blue, just as charcoal gray is darker than pearl gray (Figure 4.33). 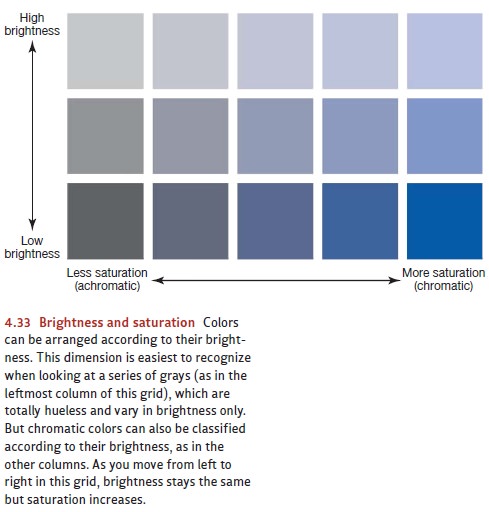 The third dimension, saturation, is the “purity” of a color—the extent to which it is chromatic rather than achromatic. The more gray (or black or white) that’s mixed with a color, the less saturation it has. Consider the bottom row of the grid shown in Figure 4.33. All five of these squares have the same hue (blue), and all have the same bright-ness. The patches differ only in one way: the proportion of blue as opposed to that of gray.