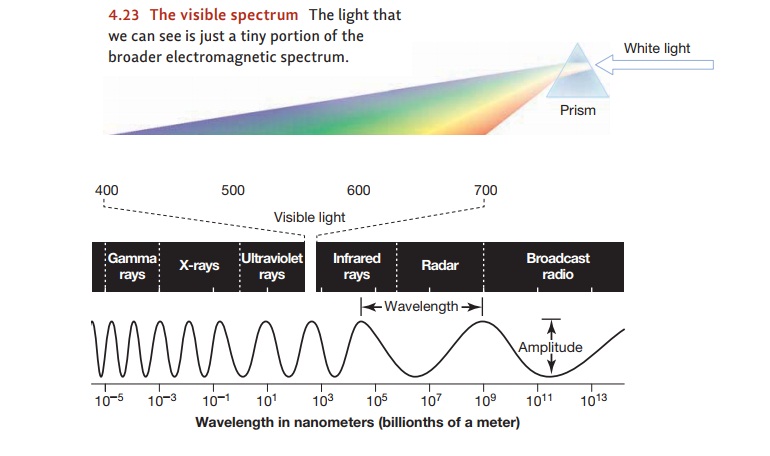 Many objects in our surroundings—the sun, candles, lamps, and so on—produce light that’s then reflected off most other objects.

Many objects in our surroundings—the sun, candles, lamps, and so on—produce light that’s then reflected off most other objects. It’s usually reflected light—from this view, for example, or from a friend’s face—that launches the processes of vision.

Whether it’s emitted or reflected, the stimulus energy we call “light” can be under-stood as traveling in waves. Like sound waves, these light waves can be described in terms of two measurements. First, light waves can vary in amplitude, which is the major determinant of perceived brightness. A light wave’s amplitude is measured as the “height” of the waves, starting from the wave’s baseline. Second, light waves vary in frequency—how many times per second the wave reaches its maximum amplitude. As it turns out, these frequencies are extremely high because light travels so swiftly. It’s more convenient, therefore, to describe light waves using the inverse of frequency—wavelength, the distance between the crests of two successive waves. Wavelengths are measured in nanometers (billionths of a meter) and are the major determinant of perceived color. 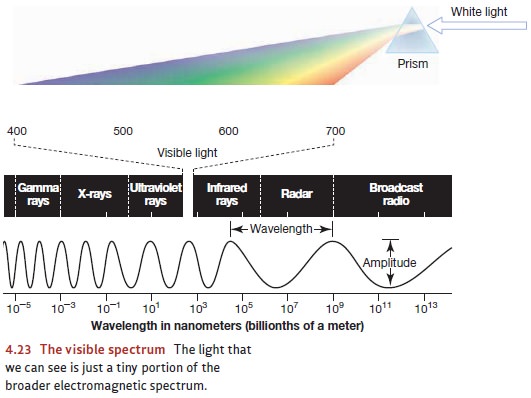 Be aware, though, that the boundaries of the visible spectrum are not physical boundaries indicating some kind of break in the electromagnetic spectrum. Instead, these boundaries simply identify the part of the spectrum that human eyes can detect. Other species, with different types of eyes, perceive different subsets of the broader spectrum. Bees can perceive ultraviolet wavelengths that are invisible to us; other mammals, including some types of monkeys, can tell apart wavelengths that look identical to us.