A Survey of the Senses: Taste

For the sense of taste, just as for the sense of smell, the proximal stimuli are molecules of particular shapes that react with receptor cells. But there are many differences between taste and smell. For smell, the molecules we call odorants are carried through the air and so can reach the receptors from a considerable distance. (You can, for exam-ple, smell the garlic cooking in the kitchen the moment you enter the house; and you can smell smoke from a fire when you’re still miles away from the flames.) In contrast, the molecules called tastants are carried by fluids, not by air. Tastants cannot easily travel from one place to another; this is why we can’t taste the cookie even if it’s just inches away from us.

Another difference between taste and smell concerns the location of the recep-tors themselves. The smell receptors are located, as we’ve discussed, in the olfactory epithelium at the top of the nose. The taste receptors are located primarily on the tongue, although many are found on the roof of the mouth and the upper throat. So, to taste something , we need to place it into our mouths. Specifically, when we eat or drink something , the tastant molecules are carried to the papillae that cover our tongue (Figure 4.14). Each papilla contains hundreds of taste buds, and each taste bud contains a hundred or so receptor cells. At these receptors, the molecules trigger a response that ultimately leads to the sensation of taste. However, these counts (the number of taste buds per papilla, or the number of receptors per taste bud) are only rough approximations, because many factors can change the counts. One factor, for example, is age. Evidence suggests that a young child may have twice the number of taste receptors that a 20-year-old has; the elderly have even fewer taste receptors (Herness & Gilbertson, 1999). 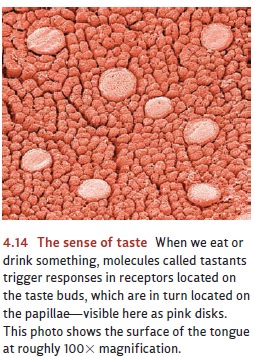 A further difference between taste and smell lies in the sheer complexity of these senses. For smell, there are roughly 1,000 receptor types. For taste, there are just five types evenly distributed over the whole tongue (Bartoshuk & Beauchamp, 1994). In fact, scientists believed for many years that the sense of taste was even simpler—they identified just four types of taste receptors, each type especially sensitive to one of four basic tastes: salt, sour,bitter, and sweet. It’s now clear, however, that there’s a fifth type of receptor, and it’s especiallysensitive to a flavor called by its Japanese name: umami (pronounced “oo-MA-me”; Kurihara & Kashiwayanagi, 1998). Umami, often described as “savory,” is the flavor that characterizes many high-protein foods, including meat and cheese. It also turns out to be the taste produced by the flavor enhancer monosodium glutamate (MSG). 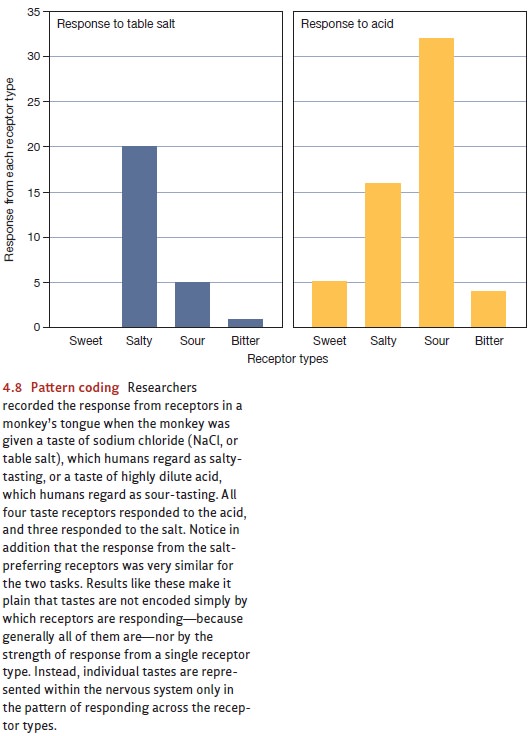 What are the physical stimuli that produce each of the basic taste qualities? We do not have a full answer. We know that the sour taste is associated with acids, and that salty tastes emanate from sodium-sensitive receptors. The story is more complicated for sweet and bitter sensations. Both are generally produced by complex organic molecules, but there are no clear-cut rules summarizing the relationship between a molecule’s structure and the resulting taste. Thus, sweet tastes are produced by various sugars; but they’re also produced by several different artificial sweeteners, some of which have chemical structures very different from sugar.

Whatever their physical basis, though, it’s clear that tastes often have a special bio-logical role. For example, many nutritive substances contain some form of sugar, and so natural selection would have favored organisms with a preference for sweets—which would have led these organisms to a high-calorie diet, helping them survive. This helps us understand why most animals, shaped by natural selection, are strongly attracted by sweet tastes. (Whether a preference for sweets is still healthy in the modern world— where high-calorie foods are so readily available to us—is another matter.) On the other hand, many toxic substances are bitter, and so natural selection would likely have favored organisms that avoided bitter tastes. This helps us understand why most ani-mals do avoid bitter flavors and, if they ingest something bitter, respond by gagging or vomiting.

These evolutionary claims obviously suggest that some of our taste preferences are shaped by our genetic heritage. As a result, we should be able to document taste pref-erences in newborns—and in fact we can: The newborns of many species (including humans) have strong taste preferences; they respond positively to sweet tastes but grimace and gag in response to bitter tastes (Figure 4.15). 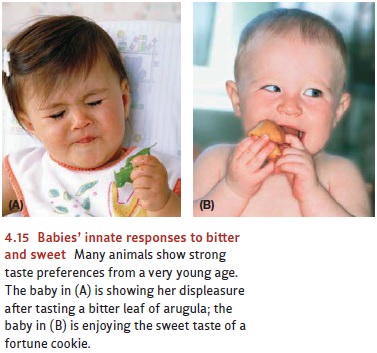 Our genes also influence our sense of taste in other ways. People differ in their pattern of taste sensitivities; some individuals are especially sensitive to some flavors, other peo-ple are more sensitive to other flavors. At least some of this variation seems to be shaped by genetic factors, a point that’s well documented for the so-called supertasters. These are people who seem enormously sensitive to certain tastes, probably because they literally have more papillae than other people do. We can identify supertasters by placing on their tongue a bit of paper impregnated with the chemical compound propylthiouracil (PROP). For roughly 75% of our species, this chemical has either no detectable taste or only a mild taste; for the supertasters, though, this chemical has an extremely bitter taste. Happily, supertasters are unlikely to encounter PROP (and the horrid taste it produces for them) outside of the lab. Even so, their sensitivity still shapes the everyday experience of super-tasters: They generally dislike—and avoid—some relatively common foods, including brussels sprouts and other forms of cabbage; coffee; spinach; and various soy products (Bartoshuk, 2000; Bartoshuk, Duffy, & Miller 1994; Mennella, Pepino, & Reed, 2005).

Other taste preferences, though, are more heavily influenced by learning. In some cases, learning can create a conditioned taste aversion in which an organism, due to a specific experience, comes to associate a particular taste with illness—and from then on seems to find that flavor repul-sive. In other cases, the learning may simply involve a matter of familiarity. Many adults can, for example, name certain “comfort foods”—foods that somehow make them feel safe and comfortable— and, in most cases, these are the familiar foods of childhood. Familiarity also plays a key role in defining a culture’s cuisine—people in Greece are familiar with, and generally like, foods carrying the fla-vors of olive oil, tomato, and cinnamon; people in China are familiar with, and generally like, foods carrying the flavors of soy and ginger; people in the Middle East have the same response to lemon and parsley, and so on (E. Rozin, 1973). Still other taste preferences are also shaped by learning, but the nature of the learning is simply unclear. Why do some people learn to love tofu, while others have the opposite reaction? Why do some people learn to enjoy beers—perhaps a dark beer in particular, or an especially bitter one—while others do not? These are simply questions for further research.