A Survey of the Senses: Smell 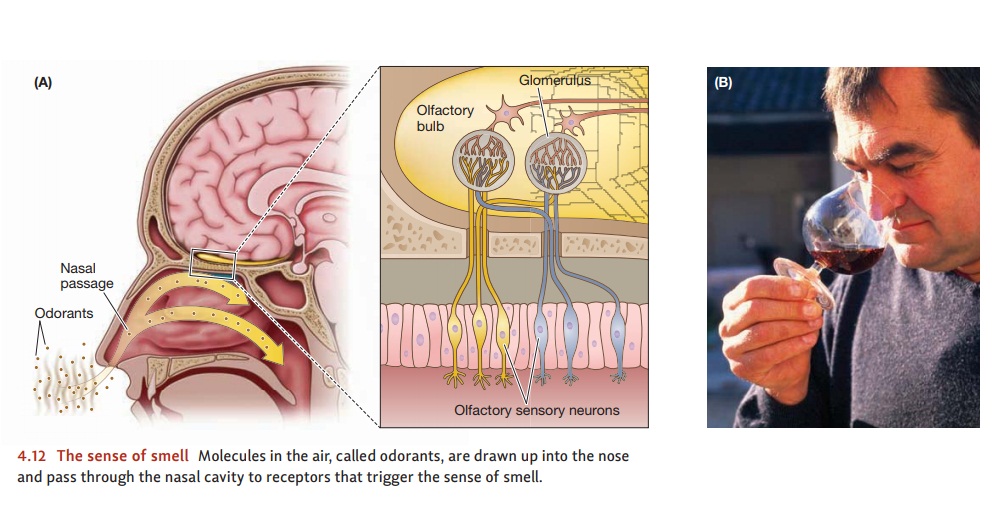 Smell may be the sense modality that we understand least .

Smell may be the sense modality that we understand least (for recent surveys, see A. Gilbert, 2008; Zarzo & Stanton, 2009). Still, some basic facts are clear: Complex molecules drift through the air, and some are drawn up the nose to a mucous membrane called the olfactory epithelium—it’s located at the top of the nasal cavity, a little less than three inches up from the nostrils’ opening. The epithelium in each nostril con-tains roughly 10 million olfactory receptor neurons. Some of the molecules that reach

these neurons bind to these receptors, changing their membrane structure and thus triggering an electrical response. The molecules that can produce a response in these receptors are called odorants (Figure 4.12).

The axons from the receptors exit the nasal cavity through a thin layer of bone and reach upward into the olfactory bulb, a brain structure above the nasal cavity and just beneath the frontal lobes. Within the olfactory bulb, the axons converge at sites called glomeruli. The nose contains roughly 1,000 types of receptors, and each glomerulusreceives input from just one of these receptor types. Because each type of odorant binds more easily to some types of receptors than others, we can think of each type of recep-tor as having a “preferred” odorant. Then, with each glomerulus receiving inputs from just one type of receptor, this preference for certain odorants is inevitably passed along from the receptors to the glomeruli.

It’s not clear, however, how the many glomeruli give rise to the various odors that humans can discriminate (Axel, 1995). We’ve already mentioned the roughly 1,000 types of receptors—and therefore 1,000 types of glomeruli—but in fact humans can distinguish roughly 10,000 different odors. Right away, these numbers tell us that our sense of smell does not rely on a one-glomerulus-per-scent coding—we don’t rely on “labeled lines” that use one neural pathway for each scent. Instead, it must be that each odor we can distinguish produces some unique pattern of activation in the various glomeruli. What this pattern is—and so exactly how the nervous system distinguishes, say, the smell of roses from the smell of vanilla—remains a topic for research (for a recent exploration of these issues, see Khan et al., 2007).

The sense of smell has many functions. Smell helps many animals to locate food— think of a bear managing to find the ripe berries, or a dog hunting for a rabbit. Smell also helps animals avoid danger; it’s why predators usually approach their prey from downwind, so that the prey won’t pick up the predator’s scent. Smell also contributes heavily to our sense of flavor—partly because air carrying odorants can reach the nasal cavity through either the nose or an opening at the back of the mouth. In fact, a large part of what we call flavor—and thus a large factor in our selection (and enjoyment!) of foods—is really smell. This point is evident whenever someone has a head cold that impairs their sense of smell. In that situation, most foods taste incredibly bland— strong testimony to just how much flavor involves the way something smells, rather than how it tastes. You can test this point without having a head cold: Pinch your nose closed, shut your eyes, and have someone feed you either a small bit of an onion or a small bit of apple. Without visual or smell cues, you won’t be able to tell which bit is which. Indeed, in the laboratory, people with their nostrils blocked seem unable to tell apart flavors as diverse as grape, coffee, chocolate, and garlic (Mozel, B. Smith, P. Smith, Sullivan, & Swender, 1969).

Smell also has important social functions. For some animals, smell allows one indi-vidual to recognize other individuals—so that infant rats can recognize their mothers via smell, and their mothers can recognize them the same way. In addition, smell can serve a communicative function by alerting other individuals to the whereabouts or the status of other individuals from that species. This is, of course, why many animals mark their territories by rubbing against trees, or by depositing small splashes of urine at var-ious landmarks within their domain. These activities leave scent traces that announce the scent donor’s “ownership” of that bit of real estate.

Smell-based communication within a species usually involves specialized chemicals called pheromones—biologically produced odorants that convey information to other members of the species. Some pheromones simply identify the species: “Know by this smell that a fellow cat is nearby.” Other pheromones convey information about the donor’s current state. For instance, some pheromones serve as alarm signals— when an animal is frightened, its sweat includes chemicals that can be detected by other members of that species, putting them on alert that some threat is at hand (e.g., Brechbühl, Klaey, & Broillet, 2008). Other pheromones play a role in mating—for example, helping males of the species to locate sexually receptive females (e.g., Michael & Keverne, 1968).

There has been considerable debate about the role of pheromonal communication in humans—especially in human mating. We do know that human parents can sniff a T-shirt and tell by the scent which of their children wore the shirt (R .Porter & Schaal, 1995; Wallace, 1977). We also know that human infants just a week old can dis-tinguish between their mother’s scent and the scent of another lactating woman (Macfarlane, 1975; Cernoch & Porter, 1985). But what about a role for pheromones in selecting a mate, or in sexual arousal itself ? Many laboratories are exploring this issue, often with the hope of identifying some sex attractant—and, as Figure 4.13 suggests, often with funding from the perfume industry! However, the results of this research have been inconclusive at best (McClintock, 2000). Even so, there’s no question that at least some aspects of human reproductive behavior are influenced by scent. We find some evidence for this point among young women who live together; they tend to have synchronized menstrual cycles, ovulating and menstruating on the same days. More, this synchrony is established relatively quickly—after the women have lived together for just 3 months (McClintock, 1971). 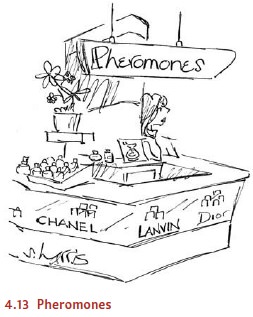 What causes this menstrual synchrony? The answer turns out to be scent. In a number of experiments, investigators have collected perspiration from the under-arms of one group of women and then wiped these secretions under the noses of a different group of women who’ve never met the scents’ donors. This communication via smell is enough to establish the synchrony (Stern & McClintock, 1998)—a pow-erful indicator that some aspects of our reproductive systems are, in fact, governed by odor cues.