Heitler and London gave a theoretical treatment to explain the formation of covalent bond in hydrogen molecule on the basis of wave mechanics of electrons.

Consider a situation wherein two hydrogen atoms (Ha and Hb) are separated by infinite distance. At this stage there is no interaction between these two atoms and the potential energy of this system is arbitrarily taken as zero. As these two atoms approach each other, in addition to the electrostatic attractive force between the nucleus and its own electron (purple arrows), the following new forces begins to operate.

(i) nucleus of Ha and valence electron of Hb

(ii) nucleus of Hb and the valence electron of Ha.

(i) the nucleus of Ha and Hb 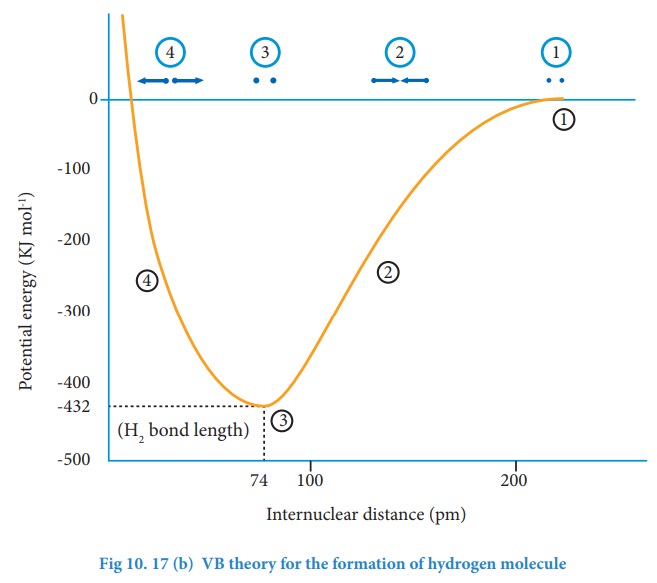 At this stage, there is a maximum overlap between the atomic orbitals of Ha and Hb, and the atoms Ha and Hb are now said to be bonded together by a covalent bond. The internuclear distance at this stage gives the H-H bond length and is equal to 74 pm. The liberated energy is 436 kJ mol-1 and is known as bond energy. Since the energy is released during the bond formation, the resultant molecule is more stable. If the distance between the two atoms is decreased further, the repulsive forces dominate the attractive forces and the potential energy of the system sharply increases

(i) When half filled orbitals of two atoms overlap, a covalent bond will be formed between them.

(ii) The resultant overlapping orbital is occupied by the two electrons with opposite spins. For example, when H2 is formed, the two 1s electrons of two hydrogen atoms get paired up and occupy the overlapped orbital.

(iii) The strength of a covalent bond depends upon the extent of overlap of atomic orbitals. Greater the overlap, larger is the energy released and stronger will be the bond formed.