Lewis concept and valence bond theory qualitatively explains the chemical bonding and molecular structure. Both approaches are inadequate to describe some of the observed properties of molecules. For example, these theories predict that oxygen is diamagnetic. However, it was observed that oxygen in liquid form was attracted towards the poles of strong magnet, indicating that oxygen is paramagnetic. As both these theories treated the bond formation in terms of electron pairs and hence they fail to explain the bonding nature of paramagnetic molecules. F. Hund and Robert. S. Mulliken developed a bonding theory called molecular orbital theory which explains the magnetic behaviour of molecules.

The salient features of this theory are as follows.

5. Bond order gives the number of covalent bonds between the two combining atoms. The bond order of a molecule can be calculated using the following equation

A bond order of zero value indicates that the molecule doesn't exist.

Constructive interaction: The two 1s orbitals are in phase and have the same sign. 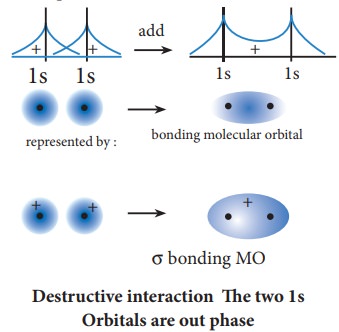 Destructive interaction The two 1s Orbitals are out phase 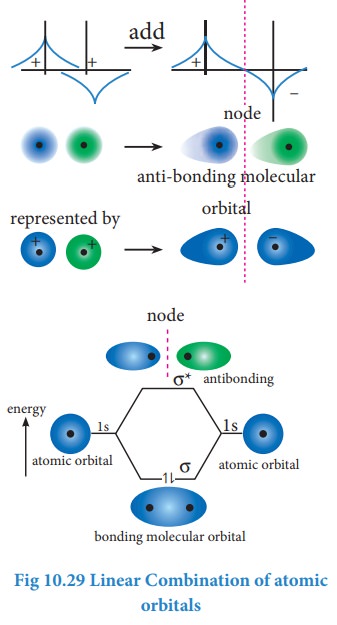 Bonding in some Homonuclear di-atomic molecules: 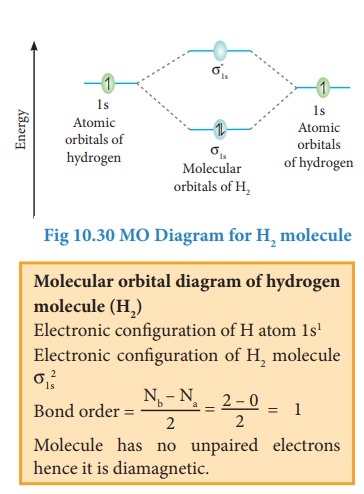 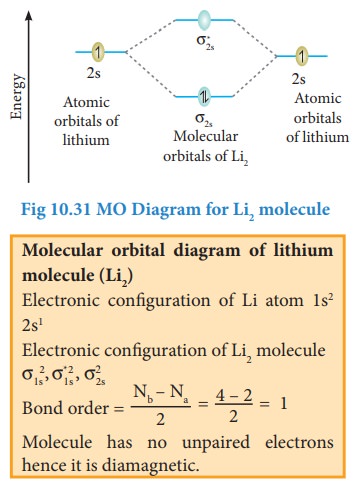 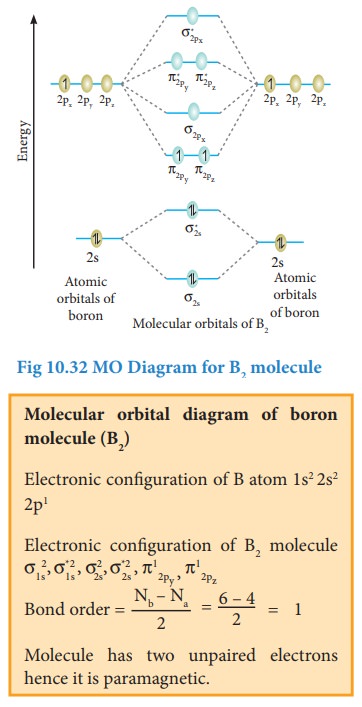 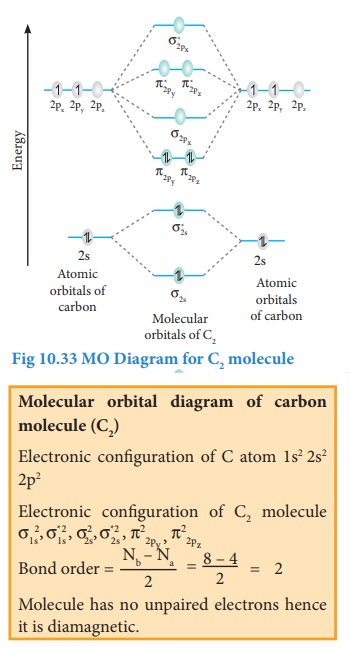 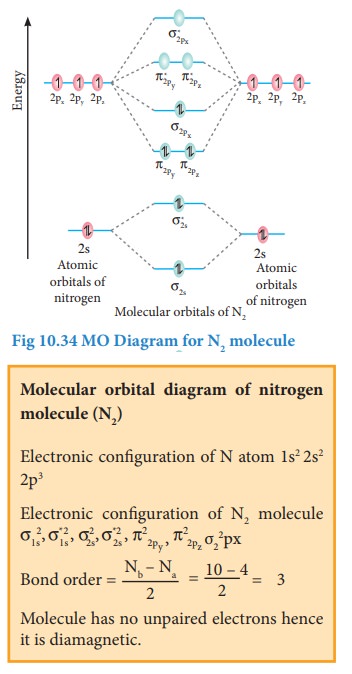 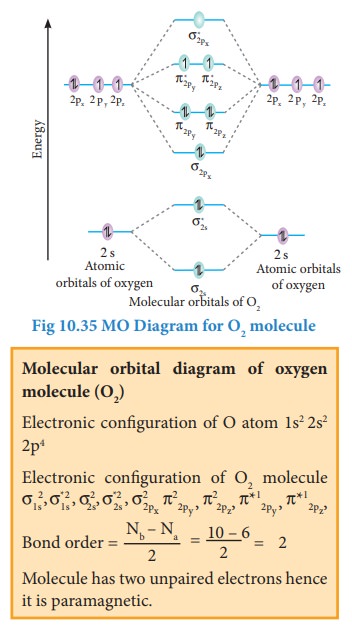 Metals have some special properties of lustre, high density, high electrical and thermal conductivity, malleability and ductility, and high melting and boiling points. The forces that keep the atoms of the metal so closely in a metallic crystal constitute what is generally known as the metallic bond. The metallic bond is not just an electrovalent bond(ionic bond), as the latter is formed between atoms of different electro negativities. Similarly, the metallic bond is not a covalent bond,as the metal atoms do not have sufficient number of valence electrons for mutual sharing with 8 or 12 neighboring metal atoms in a crystal. So, we have to search for a new theory to explain metallic bond. The first successful theory is due to Drude and Lorentz, which regards metallic crystal as an assemblage of positive ions immersed in a gas of free electrons. The free electrons are due to ionization of the valence electrons of the atoms of the metal. As the valence electrons of the atoms are freely shared by all the ions in the crystal, the metallic bonding is also referred to as electronic bonding. As the free electrons repel each other, they are uniformly distributed around the metal ions. Many physical properties of the metals can be explained by this theory, nevertheless there are exceptions.

The electrostatic attraction between the metal ions and the free electrons yields a three-dimensional close packed crystal with a large number of nearest metal ions. So, metals have high density. As the close packed structure contains many slip planes along which movement can occur during mechanical loading, the metal acquires ductility. Pure metals can undergo 40 to 60% elongation prior to rupturing under mechanical loading. As each metal ion is surrounded by electron cloud in all directions, the metallic bonding has no directional properties.

As the electrons are free to move around the positive ions, the metals exhibit high electrical and thermal conductivity. The metallic luster is due to reflection of light by the electron cloud. As the metallic bond is strong enough, the metal atoms are reluctant to break apart into a liquid or gas, so the metals have high melting and boiling points.

The bonding in metal is better treated by Molecular orbital theory. As per this theory, the atomic orbitals of large number of atoms in a crystal overlap to form numerous bonding and antibonding molecular orbitals without any band gap. The bonding molecular orbitals are completely filled with an electron pair in each, and the antibonding molecular orbitals are empty. Absence of band gap accounts for high electrical conductivity of metals. High thermal conductivity is due to thermal excitation of many electrons from the valence band to the conductance band. With an increase in temperature, the electrical conductivity decreases due to vigorous thermal motion of lattice ions that disrupts the uniform lattice structure, that is required for free motion of electrons within the crystal. Most metals are black except copper, silver and gold. It is due to absorption of light of all wavelengths. Absorption of light of all wavelengths is due to absence of bandgap in metals.